INCISIV National
Acasă Actualitate Rumors had started flying that Griffin might be pushed out as long... 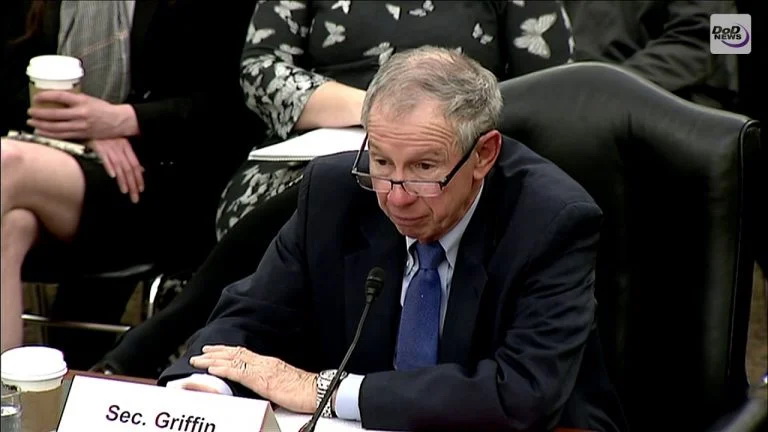 DoD Undersecretary for Research and Engineering Mike Griffin, and his deputy Lisa Porter, have jointly tendered their resignations affective July 10 — after two tumultuous years and increasing congressional push back on R&E management.

A DoD official confirmed the resignation today, noting only that Griffin and Porter went to the White House this morning and informed the staff later.  An email from the two sent to staff, obtained by Breaking D, states:

“As has been our practice, this is from Mike’s email, but equally from both of us. We want to inform you that we have submitted our resignations from our present positions, effective 10 July.  A private-sector opportunity has presented itself to us, offering an opportunity we have decided to pursue together.”

“I have never seen two political appointees leave together to pursue the same opportunity, but if they make a good team then there is nothing precluding that from happening. There is a process of recusal from issues when appointees or senior DoD officials begin to start looking for opportunities and I assume they complied with all of those wickets,” Bill Greenwalt, former Senate Armed Services Committee official and DoD acquisition guru, told Breaking D in an email today.

According to insiders, there is a whiff of the proverbial ‘leaving to spend time with my family’ about the joint resignation email — in that the duo was under pressure from Deputy Defense Secretary David Norquist to step aside. There have been consistent reports over the past 18 months that a number of R&E staff have complained of toxic leadership during the Griffin-Porter tenure. And, more than one source in the loop said, both Griffin and Porter had recently told staff that they intended to stay in place until after Trump’s renomination as the Republican candidate for president.

In response to a Breaking D inquiry, a spokesperson for DoD’s Office of the Inspector General “could not confirm or deny” that there as been at least one, if not more, official complaints from staffers who felt mistreated.

“The Missile Defense enterprise is at the heart of this turmoil. Now it’s time to take stock of the many moving parts and reassess how to best match institutional identities and competencies with the missions and tasks at hand,” Tom Karako, missile defense expert at the Center for Strategic and International Studies (CSIS), told Breaking D today.

Congressional aides have complained loudly that Griffin’s shop, including SDA, have been less than transparent and have taken major actions without properly vetting them with the Hill. For example, both sides of Capitol Hill were stunned when Griffin suddenly killed MDA’s Redesigned Kill Vehicle last August. (It should be noted that as early as last June rumors were flying that Griffin might be pushed out by exasperated DoD leadership.)

Congress also in the 2020 NDAA brushed aside a strong push by Mike Griffin to demote the Strategic Capabilities Office (SCO) and place it under DARPA. That move by Griffin prompted the resignation of the popular SCO director Chris Shank.

Both House and Senate Armed Services committees also have been highly skeptical of the SDA, and concerned about how it’s program to develop multiple constellations of Low Earth Orbit (LEO) satellites is being integrated with the ongoing programs of the Space and Missile Systems Center (SMC).

Finally, the effort by Griffin, Porter and SDA Director Derek Tournear to postpone moving SDA to the Space Force — something that the 2020 NDAA directed be done by October 2022 — also has raised hackles on the Hill.

The resignations follow hard on the heels of another pair of high-level leave-takings just last week. As Paul reported, Katie Wheelbarger, who oversees international security affairs and had been nominated to be the military’s second highest-ranking intelligence official, stepped down. Her resignation came only two days after Elaine McCusker, the Pentagon’s acting comptroller, announced she was stepping down.

“This is the time — in the last six months of an administration — when you expect to see a lot of departures,” Greenwalt said. “This administration is just different in that it took so long for them to fill these jobs in the first place. There have been so many actings and open positions over in the Pentagon for so long, and all of the uncertainty generated from personnel changes has a real adverse impact on policy and national security. Now we will see the same process unfold again at R&E.”

Greenwalt added that with only six months left in this administration, it “is doubtful” DoD would even be able to nominate a replacement to Congress “unless they have been working on it for the last six months.” And even if there was someone in the wings, he asked, “would any one really expect the Senate to act this late in the game?”

That said, given that Griffin holds acquisition sign-off authority for MDA and SDA — along with projects directly under his shop — someone will have to step in on an acting basis. Names floating in the wind at this point are Al Shaffer, Ellen Lord’s current deputy, and Mark Lewis, recently brought in by Griffin as director of modernization. Given Congress’s interest in transferring responsibility for MDA to Lord, one insider suggested, Shaffer may be the more politic choice.(D.N.).