Acasă Actualitate The military will consolidate from dozens of different, often-incompatible counter-drone defenses to... 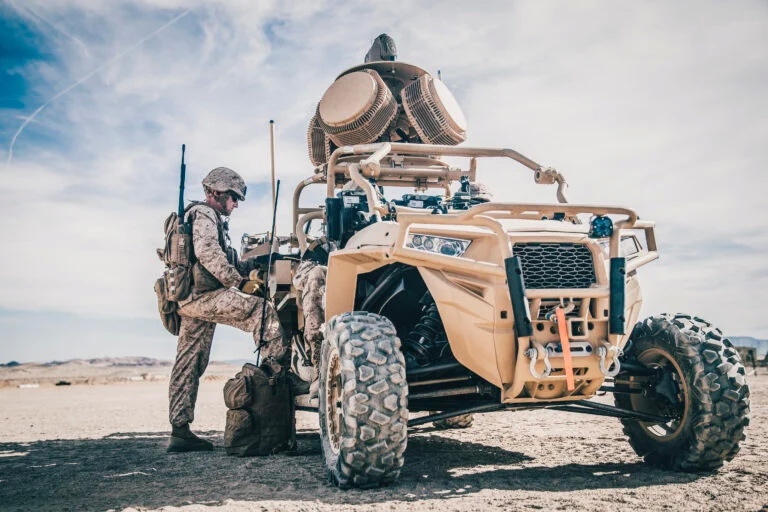 A Marine with the L-MADIS counter-drone system, sensors and jammers mounted on a Polaris M-RZR 4×4.

WASHINGTON: From radio jammers to lasers, a wide range of technologies from a wide range of companies will have a place in the Pentagon’s new architecture for anti-drone defense, Maj. Gen. Sean Gainey told reporters this morning.

“What all the services have truly embraced is the common C2 standards that are being developed as part of this process, which is going to allow the plug-and-play of industry’s emerging technologies,” said Gainey, the Army two-star tapped in January to head the newly created JCO, the Joint Counter-Small Unmanned Aircraft Systems Office.

Sean Gainey before his promotion to Major General

Yesterday, the JCO endorsed seven defensive systems and a single standard architecture for common-and-control, mandating the Army’s FAAD-C2 or a compatible C2 network such as the Air Force’s MEDUSA. If your unit uses one of the dozens of other systems not on the list, you’re still allowed to keep them, and program offices will sustain them, but the services should make all new purchases from the approved list. There’s no fixed timeline to phase out the other systems, Gainey said.

JCO is also developing a formal Capabilities Development Document (CDD) – “we expect to have our initial draft of it this fall,” Gainey said this morning – that will define official requirements for future systems and upgrades to current ones.

The goal is to stop different services and commands from buying multiple, often incompatible counter-drone defenses, focus investment on fielding and upgrading a few “best of breed” systems, and, perhaps most important, impose a single common standard for command & control that’s flexible enough to bring in new technologies as they emerge.

Why does this matter? The military has spent many millions to stop $100 quadcopters and other mini-drones that terrorists could use to spy or to deliver bombs.With ISIS using mini-drones in Syria and Iraq, while Iran used larger ones against a Saudi oil field, the need was urgent, and experiments like Black Dark fostered some ingenious innovations. But the result has been a hastily stitched patchwork of defenses, many of which only solve one small part of the problem and don’t work well with one another.

Gainey’s JCO reviewed about 40 different systems either bought expressly for the Counter-small Unmanned Aerial Systems mission or modified to do C-sUAS, ranging from a handheld jammer called Drone Buster to missile defense radars. About 10 of those systems had valid missions beyond C-sUAS, like the Army’s Sentinel radar, so the new policy doesn’t apply to them, Gainey said, but it does cover the 30-plus others that were specifically or primarily for stopping small drones.

The seven approved defenses fall into three categories. Dismounted/Handheld covers lightweight tech for troops on foot. Three options are approved in this category:

The middleweight category, vehicle-Mounted/Mobile Systems, has one option: the Marine Corps’ L-MADIS (Light-Mobile Air Defense Integrated System), whose current form is a high-powered jammer and sensor package mounted on a 4×4. (It’s the L-MADIS in the photo at the top of this story).

The heavyweight category, stationary Fixed/Semi-Fixed Systems, has one primary option, developed by the Army, and two others that the Army has proven can integrate with it.

The approach to command-and-control is similar, with the primary baseline being an Army-developed system, but two compatible systems from other services were also approved:

Now, that’s three different command-and-control systems, not one, but what matters is that they’re all fully compatible. (The military in general has largely given up on trying to build “one system to rule them all” and is instead trying to make different, specialized systems work together). JCO is working with the services to establish common technical standards governing counter-drone command-and-control, Gainey said, so the military can plug-and-play any company’s new technology as long as it meets those standards.

“We’re going to continue to look at emerging technology and new technology out there,” he said, “where industry can have the opportunity to compete.” (Sydney J. Freedberg Jr.).

As the UAE and Israel make big progress in normalizing relations, analysts warn of actions that include obstructing the sale of the F-35 fighters...

“I’m optimistic as a department that we’re moving in the right direction,” says Gen. Glen VanHerck on JADC2 development.

“Historically the Arctic, like space, was characterized as a predominantly peaceful domain,” the Air Force...

The battle over the JEDI cloud computing program is now more tangled than the 11-movie...

“Most of the challenges we have in weapon systems aren’t hardware-based but software-based,” says Lt....