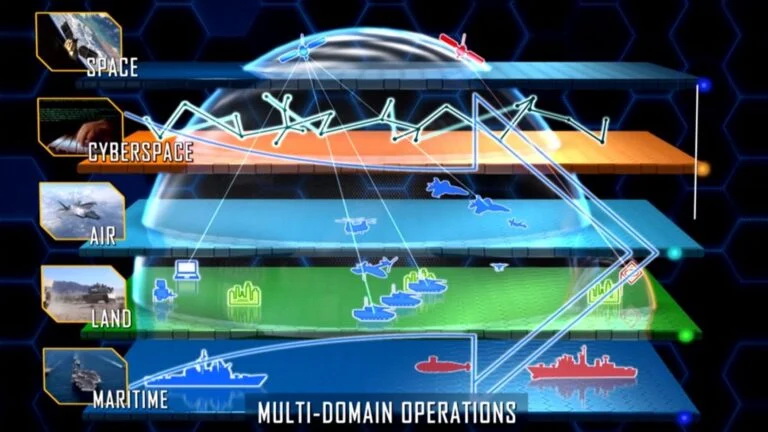 UPDATED JUNE 30 TO INCLUDE USAFE RESPONSE ON EXERCISE DETAILS

WASHINGTON: The Air Force is working to bring its Advanced Battle Management System (ABMS) to Europe this spring as it searches for ways to integrate allies into plans for All-Domain Operations, says Gen. Jeffrey Harrigian, commander of Air Forces Europe and Africa.

“We’ve been planning on leveraging a Spring ’21 exercise here in Europe to bring in some capabilities that would allow us to work through, I’ll use the term ‘layered ISR’ capabilities,” he told the Mitchell Institute today.

Harringian said that US allies are “very interested” in US ideas about All-Domain Operations. “Clearly, they are looking — to use in my words — ‘see themselves’ in JADC2 and how do they fit in.” This includes considering how enabling sensors, such as ground-based radar, owned by some allies that already provide data to NATO might be integrated. It also includes how to link allied F-35 Joint Strike Fighters into US Air Forces that ultimately will be using ABMS.

“They’re looking to …understand the concept,” he said. “What we need to do is continue to turn PowerPoints into action” — that is, operationalize the concept so that allies can “get a better sense and feel of it.”

The idea is to test ABMS-developed software to speed transfer of sensor data to a variety of “shooters” in the European theater in a manner that allowed allies to be involved, he explained. “We are working through who and what that might mean, and at this point, I don’t have that locked down yet.”

UPDATE BEGINS. Harrigian did not specify which European-based exercise he was referring to. However, a USAFE spokesperson told Breaking D the command is hosting the fourth in the Air Force’s planned ABMS On-Ramp series.

“Gen. Harrigian was referring to an ABMS technology demonstration that will be the 4th event in a series of ABMS demonstrations led by Air Force Headquarters. This event will support ongoing Joint All Domain Command and Control (JADC2) efforts and will be executed in collaboration with USEUCOM Staff, components, and partners during the first quarter of 2021,” the spokesperson said. “We plan to exercise ABMS technology On-Ramp 4,” the spokesperson added, to “leverage the information learned to refine sensor to shooter timelines.” UPDATE ENDS.

Harrigian said it is crucial that allies not only be technologically capable of linking with US forces via the overarching Joint All Domain Command and Control (JADC2) network for managing all-domain battle, but also that they be involved in development of concepts and plans, to allow them to decide where and how they can best contribute. You can’t just bring them in in execution and go: ‘Hey we built the plan, so sorry, just do what we told you.”

Harrigian said that one of the keys to making this happen will be working around the security and secrecy protocols that have so often in the past presented major hurdles during joint US-allied operations.

“One of the things we got to push on hard is the security part of it,” he stressed. “We can find ways to do it that — without getting into all the classification details — there are ways to bring them in the tent, get them what they need to know, and allow them to be key participants from planning, through execution and then the debrief,” he added.

As Breaking D readers know, the second ABMS On-Ramp exercise is being planned for Aug. 30-Sept. 4, with Nellis AFB in Nevada serving as the coordination center. The exercise will, like the first one this past December, involve Northern Command but be focused on a scenario requiring forces to support Space Command in battling an attack on US space assets. The third is being planned for this fall, and will focus on the Indo-Pacific theater.

Harrigian noted that he hopes that some of the software development techniques and technologies to speed sensor-to-shooter timelines demonstrated during the next On-Ramp will be ready for integration with the Air Operations Centers in Europe.

“We are working closely with the Headquarters Air Force team, and AFWIC to fine tune the specifics of those capabilities that we would like to leave behind,” he said. (AFWIC is the Air Force Warfighting Integration Capability office that seeks to pinpoint new areas of investment to help rapidly bring all-domain capabilities to warfighters.)

Outgoing Air Force Chief of Staff Gen. David Goldfein has repeatedly stressed that the service is keen to rope allies into its ABMS effort, which is designed to develop technologies to enable JADC2 — primarily focused on cutting-edge software and spiral development processes that allow rapid upgrades to systems. These include the gatewayONE communications node that can translate the incompatible machine languages used by the F-35 and the F-22 fighter jets. It also includes platformONE for securely building software.

In addition, Vice Chairman of the Joint Chiefs of Staff Gen. John Hyten told Colin back in February that the Joint Staff is organizing a third Global Integrated Exercise (GIE) specifically designed to test out ADO concepts for this fall.The GIEs, launched by previous JCS Chair Gen. Joe Dunford, involve all the Combatant Commands, the National Security Council and other top national security leaders, and are focused on fighting Russia and China. Two GIEs were held last year, one in the spring and one in the fall, Hyten said. (D.N.).

SIA is hopeful that the COVID-19 pandemic will have only limited effects on the satellite...

A new policy orders organizations across the Army to embrace advanced manufacturing to “fundamentally change”...