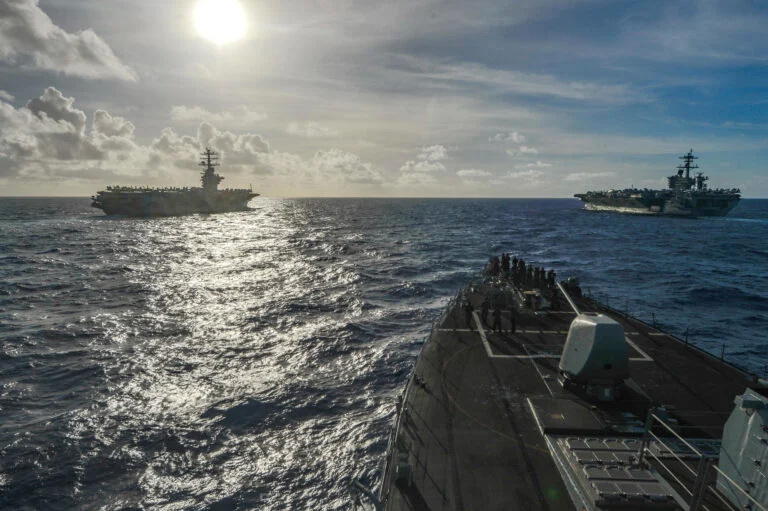 WASHINGTON: The Chinese government warned ships away from the Paracel Islands in the South China Sea today as the PLA Navy prepares to conduct four days of military exercises there, making the announcement one day after the US Navy sent two aircraft carriers into the Philippine Sea, and regional governments criticized Beijing’s island grab.

It’s not clear what the size of the Chinese exercise will be, but the government said from July 1 to 5, “no vessel shall be allowed to navigate” near the islands, “and all vessels have to follow the guidance of the commanding ship on site.”

The Chinese have no legal claim to the area they are warning other nations from since a UN tribunal ruled that China’s claims are without legal merit and violate international law.

China has long laid claim to the islands off the coast of Vietnam. Over the past several years, Beijing has constructed 20 outposts in the Paracels, complete with man-made protected harbors, helipads, and, on Woody Island they‘ve built an airstrip, hangars, and HQ-9 surface-to-air missile batteries.

The warning comes as Southeast Asian leaders repudiate Beijing for laying claim to areas of the South China Sea outside recognized international law. Countries in the region usually avoid drawing the ire of Beijing, which as the economic superpower in the region, is capable of hurting the smaller economies in the Pacific area.

But on Sunday, regional leaders backed up complaints by Vietnam that China has encroached on areas within its influence, issuing a statement saying they “reaffirmed that the 1982 [United Nations Convention for the Law of the Sea] is the basis for determining maritime entitlements, sovereign rights, jurisdiction and legitimate interests over maritime zones,” an ASEAN statement said.

No proposed action came along with the statement, but from a group who normally remains mum on such topics, the decision to speak up can be seen as significant in itself.

As the Chinese bullied their neighbors on the other side of the Luzon Strait, two American aircraft carriers arrived in the Philippine Sea for the first time since 2018, kicking off days of joint operations in the waterway.

The USS Nimitz and USS Ronald Reagan Carrier Strike Groups came together over the weekend in show of American firepower, following months of increasing naval activity in the region, including several FONOPS which sent American destroyers through the Taiwan Strait between Taiwan and mainland China.

Rear Adm. George Wikoff, commander of Carrier Strike Group 5, said in a statement that the “dual carrier operations demonstrate our commitment to regional allies, our ability to rapidly mass combat power in the Indo-Pacific, and our readiness to confront all those who challenge international norms that support regional stability.”

The USS Roosevelt, back at sea after a COVID-19 outbreak confined it to port in Guam for two months also conducted dual-carrier operations with the Nimitz in the area last week, and remains in the region. The three carriers gives Washington a significant boost in presence and firepower in the region after going months without a carrier presence in the western Pacific.

China has also stepped up its game, with the Chinese Air Force sending warplanes near Taiwan at least nine times in recent weeks, including two bombers on Sunday. (Paul McLeary).

The service’s xTechSearch contest is vetting novel designs and aims to build and deploy at...

Risk reduction missions this year “are separate flights to prove technologies” and not part of...