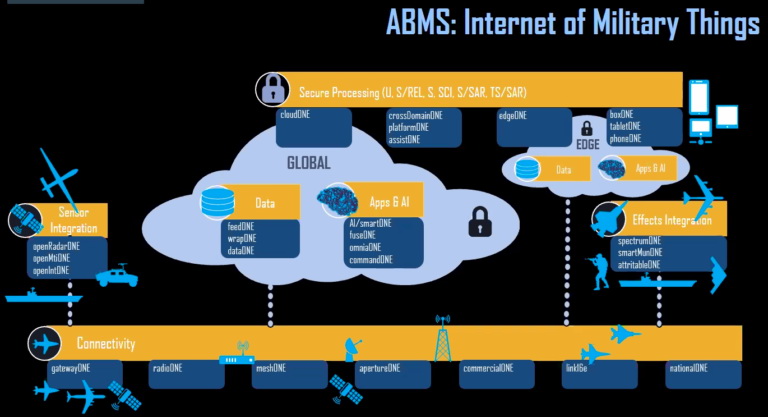 WASHINGTON: The Air Force has contracted with 18 more businesses to work on its high-priority Advanced Battle Management System (ABMS) effort to enable all-domain operations — front-loading funds for 2021 and beyond.

“These vehicles are primarily for FY21 and beyond. The reason the team is doing the ID/IQ now is to drive the task timeline down which is required for the 4-month cycle acquisition strategy,” Air Force Spokesperson Ann Stefanek told Breaking D.

“So, these awards aren’t for development. They’re to onboard a fast operational contract that allows for agile DevOps task awards in the near future. This is a lattice upon which to hang operational contracting tasks that can move fast and respond flexibly multiple times throughout the year,” she added.

As Breaking D readers are well aware, ABMS is the Air Force and Space Force effort to develop technologies, primarily software-based, to operationalize DoD’s high-priority Joint All Domain Command and Control System (JADC2) concept — which in turn will allow commanders to run the fast-paced, All-Domain Operations of the future. And the Air Force is using a unique, high-speed set of contracting authorities to allow software to be iterated quickly and new capabilities plugged into the mix.

“Just like the Internet of Things, our Air and Space Force platforms will only be as effective as the data they can access, machine-to-machine,” Air Force acquisition head Will Roper says in today’s press release.  “ABMS will help create internet-like data sharing across our Joint Force to fight at internet speeds. Rapid development and testing cycles are critical to fail, learn, and leap ahead of advancing threats.”

The new awards are, like the 28 awarded early last month, Indefinite-Delivery, Indefinite Quantity” (ID/IQ) contracts, which means it is unclear how much will go to any one of the vendors for what technology. Rather, winning firms will pitch their wares against future Air Force requests for technologies related to the 28-odd ABMS “product lines,” such as radioONE and deviceONE. If the service is interested, the vendor is invited to demonstrate that particular technology at one of the Combatant Commander-led ABMS Onramp tests.

The next ABMS Onramp is scheduled for Aug. 30-Sept. 5, and will feature a simulated attack on U.S. space assets and involve three combatant commands: Space Command (SPACECOM), Northern Command (NORTHCOM), and Strategic Command (STRATCOM). Another ABMS onramp scheduled for September will support Indo-Pacific Command and SPACECOM, “connecting sensors and shooters in a geographic operational theater outside the U.S. for the first time,” according to today’s Air Force announcement. And, as Breaking D readers know, a fourth ABMS exercise in Europe is being designed to include NATO allies.

The minimum award for each vendor is $1,000; and over the five-year period any one company could, in theory, win up to $950 million in total awards — although in reality the limit will smaller, bounded by the Air Force’s annual ABMS budget.

The Air Force currently has budgeted ABMS at $3.3 billion over the next five years. The service has requested $303.2 million for ABMS for 2021; however, both House and Senate authorizers are skeptical. While the Senate Armed Services Committee would fully fund the Air Force’s 2021 request, their house counterparts have proposed to chop $85 million from the program in the 2021 National Defense Authorization Act (NDAA).

(Given that the list of now 46 vendors given ABMS awards includes a number of small, and medium-sized businesses, which Congress is keen to protect, we wonder if the ID/IQ announcements also will help ease the program through the NDAA and appropriations processes.)