Acasă Actualitate Romania and the USA: Cooperation on Justice 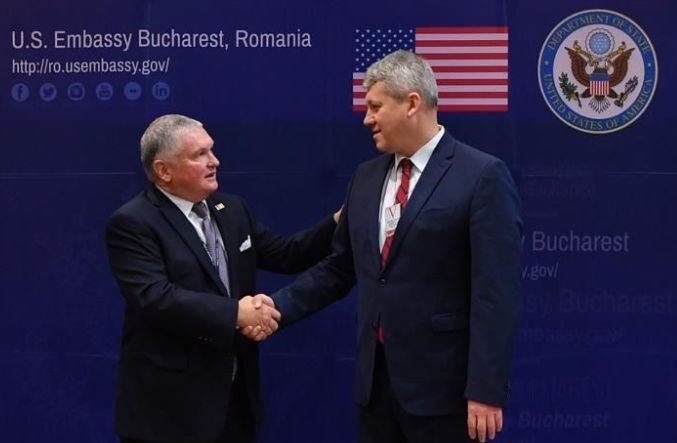 Leveraging global solutions with strategic partners: the USA, Canada, the UK, the EU, and to operate such solutions.

MAI has acted constantly, so Romania has a positive assesment in 2020.

Satements in front of the Ministry of Interior in Romania, to including the US Ambassador in Romania, the minister of interior, the justice minister, the state secretary and the general prosecutor of Romania

Official press releases before the virtual meeting of the EU’s Justice and Home Affairs Council (JHA) that will focuses on the management of the ongoing COVID-19 pandemic by European democracies, as well as measures to respond to hate speech and misinformation.

Ambassador Adrian Zuckerman on the Release of the 2020 Trafficking:

I want to thank Minister Vela, Minister Predoiu, Prosecutor General Scutea and State Secretary Despescu for the productive meeting we had this morning.

As you all know, one of the United States’ top priorities is advocating for the rule of law. … The Congressionally mandated Trafficking in Persons Report was issued. Unfortunately, Romania remains on the tier 2 Watch List for the second consecutive year, meaning the government has not sufficiently increased its efforts to combat human trafficking. The report found that last year, under the former government, anti-trafficking enforcement efforts were weakened, trafficking prosecutions and convictions decreased and care for victims was lacking.

Shortly after my arrival in Romania, I met with Justice Minister Predoiu and others in the government of Prime Minister Orban. I strongly voiced the United States’ priorities supporting the rule of law and fighting human trafficking. I am confident in this government’s commitment to eradicating this scourge from Romania, but they know they face a legacy of policies, corruption, and criminal networks that hinder their every move.

Since that time, I have been meeting regularly with the justice minister, the interior minister and others. They have been working diligently, with assistance from the United States, to prosecute trafficking crimes, but more must be done. It is sadly apparent that the TIP Report is accurate. Organized crime gangs have brazenly trafficked people knowing they would likely get away with it, as so many have in the past. Fortunately, the number of prosecutions has been steadily increasing. Protections for victims are also increasing.

Lastly, I appeal to the leadership of Parliament. Begin working with the government immediately to enact legislation necessary to swiftly prosecute these criminals and to seize the ill-gotten gains made by selling people to better protect the victims of trafficking and to repair the damage done by the former government, damage which has emboldened criminals. Now is the time for Parliament to step up and protect the very people they represent.

The Interior Ministry (MAI) took note of the United States Department of State report regarding the prevention and combat of trafficking in persons in 2019 and is constantly working on reducing human trafficking, so this year’s assessment be positive, Interior Minister Marcel Vela said.

“… We took note of the US Department of State report regarding the assessment of the activity in the prevention and combat of trafficking in persons in 2019. The report shapes up the general image of the anti-trafficking activities in Romania and recommends in which area there can be made further progress. This year, the authorities in Romania have shown a constant concern for the prevention and combat of human trafficking. The Interior Ministry, through its specialised structures, the Romanian Police and the National Agency against Trafficking in Persons are currently working together with domestic and international partners to reduce the size of human trafficking and this can be seen in the results obtained,” Vela stated at a joint news conference with Ambassador of the US in Bucharest Adrian Zuckerman, Justice Minister Catalin Predoiu and Prosecutor General Gabriela Scutea.

He added that the Interior Ministry has constantly acted so that this year’s assessment be positive.

The Interior Ministry has done its duty in everything that means combating and preventing trafficking in persons, although in this semester of 2020, the COVID-19 pandemic was the main concern of all authorities, the Minister said.

“In this regard, I would like to mention the talks carried out with the Justice Ministry, the Public Ministry, the Labour and Social Protection Ministry, the Education and Research Ministry, as well as with representatives of international organisations and civil society who manifested concern and receptivity in the sense of identifying the best solutions. I assure you that the Interior Ministry remains further committed to cooperate both with other Romanian authorities and with the civil society and foreign partners, in order to identify concrete solutions and have a fully integrated response in the general issue of combating and preventing trafficking in persons,” Vela also said.

Marcel Vela showed that he wasn’t using a figure of speech when he said ‘zero tolerance for crime.’

“The Orban Government has confirmed so far that it allocated the largest resources for mobility within the MAI, very soon, we will also announce the largest acquisition for the endowment of policemen, an endowment that has been awaited for over 40 years. Reforming is a priority for this ministry, an elite institution of the Romanian state, so it can become again that institution in the service of the citizen, respected and appreciated,” Minister Marcel Vela added.

Regarding the HA Council meeting, this is the first since Germany took over the six-month rotating presidency of the EU Council.

Romania’s Justice Minister Catalin Predoiu has attended this virtual meeting of the EU’s Justice and Home Affairs Council (JHA) that focuses on the management of the ongoing COVID-19 pandemic by European democracies, as well as measures to respond to hate speech and misinformation.

“The pandemic has slowed down the works of the JHA Council in previous months, but we have gradually adapted and resumed our pace of collaboration, for now in virtual meetings. Giving the context, I want to reiterate the position of the Romanian Ministry of Justice to support a rule of law mechanism for all member states,” Predoiu said ahead of the meeting.

He added that Romania does not want this mechanism to overlap the Co-operation and Verification Mechanism (CVM), under which Romania’s progress with judiciary reform and the fight against high-level corruption is being monitored and assessed.

“Regarding the CVM, beyond the difficulties of 2017-2018, we should not forget the remarkable progress made by Romania under the CVM, especially in the fight against corruption. We have exported and can export expertise and good practices, a fact demonstrated in time during countless conversations that have taken place at the level of the Ministry of Justice and the Public Prosecution Service, within which partners from other member states were impressed by the results in Romania. I was personally requested in my first term by colleagues from Bulgaria, the United Kingdom, the Czech Republic, Poland, and Italy to detail the strategies used by Romania in developing its judiciary and the fight against corruption at all levels,” Predoiu is quoted as saying in a press statement released by the Justice Ministry (MJ).

In his opinion, the Romanian judiciary is not inferior to other judicial systems in other member states, and any differences in monitoring from such perspective are inadequate and appearing unfair.

“Of course, we will resume the reforms halted in 2017-2018 – slippages were stopped anyway in 2019 also because of the referendum on justice convened by President Klaus Iohannis last year; the coming months will mark the resumption of public debates to repair the legislative framework for justice and the fight against corruption,” the Justice Minister also said. A.R.

“I’m very confident going forward that we’ve made a decision that is based much more...