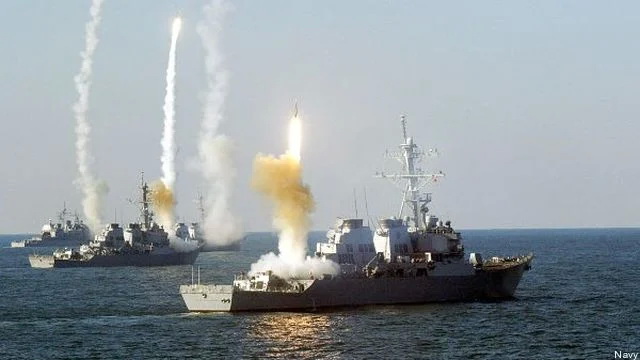 Don’t try to shoot down each arrow as it comes; shoot the archer. That’s a time-honored military principle that US forces would struggle to implement in an actual war with China, Russia, North Korea, or Iran, warns a new report from thinktank CSIS.

New technology, like the Army’s IBCS command network – now entering a major field test — can be part of the solution, but it’s only part, writes Brian Green, a veteran of 30 years in the Pentagon, Capitol Hill, and the aerospace industry. Equally important and problematic are the command-and-control arrangements that determine who makes the decision to fire what, at what, and when.

Today, the military has completely different units, command systems, doctrines, and legal/regulatory authorities for missile defense – which tries to shoot down threats the enemy has already launched – and for long range offensive strikes – which could keep the enemy from launching in the first place, or at least from getting off a second salvo, by destroying launchers,  command posts, and targeting systems. While generals and doctrine-writers have talked about “offense-defense integration” for almost two decades, Green says, the concept remains shallow and incomplete.

“A thorough implementation of ODI would touch almost every aspect of the US military, including policy, doctrine, organization, training, materiel, and personnel,” Green writes. “It would require a fundamental rethinking of terms such as ‘offense’ and ‘defense’ and of how the joint force fights.” Indeed, it easily blurs into the even larger problem of coordinating all the services across all five domains of warfare – land, sea, air, space, and cyberspace – in what’s known as Joint All-Domain Operations.

The bifurcation between offense and defense runs from the loftiest strategic level down to tactical:

This division of labor might have worked when warfare was slower. But China and Russia have invested massively in their arsenals of long-range, precision-guided missiles, along with the sensors and command networks to direct them to their targets. So, on a lesser scale, have North Korea and Iran. The former deputy secretary of defense, Bob Work, warned of future conflicts in which “salvo exchanges” of hundreds of missiles – hopefully not nuclear ones – might rocket across the war zone within hours.

It’s been obvious for over a decade that current missile defense systems simply can’t cope with the sheer number of incoming threats involved, which led the chiefs of the Army and Navy to sign a famous “eight-star memo” in late 2014 that called, among other things, for stopping enemy missiles “left of launch.” But that approach would require real-time coordination between the offensive weapons, responsible for destroying enemy launchers, command posts, and targeting systems, and the defensive ones, responsible for shooting down whatever missiles made it into the air.

While Navy Aegis and Army IBCS show some promise, Green writes, neither is yet capable of moving the data required among all the users who would need it: Indeed, IBCS is still years away from connecting all the Army’s defensive systems, while Aegis only recently gained an offensive anti-ship option, a modified SM-6, alongside its defensive missiles.  As two Army generals cautioned in a recent interview with Breaking Defense, missile defense and offense have distinctly different technical requirements that limit the potential of using a single system to run both. There are different legal restrictions as well: Even self-defense systems operate under strict limits, lest they accidentally shoot down friendly aircraft or civilian airliners, and offensive strikes can easily escalate a conflict.

Green’s 35-page paper doesn’t solve these problems. But it’s useful examination of how complex they can become. (D.N.).

“Molecular characterization of a new species in the genus Alphacoronavirus…”

This is a just a DoD product. The 2011 National Security Space Strategy was very...

The exercise, taking place this weekend off of the East Coast, will test Pentagon thinking...