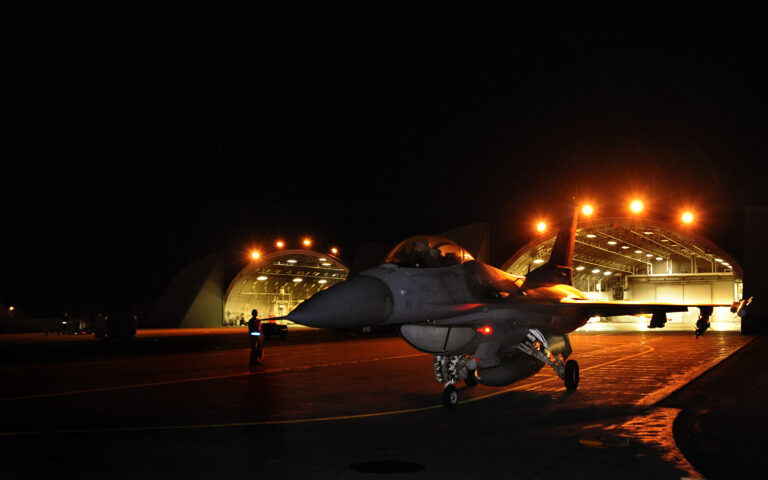 “I am trying to put Kubernetes into F-16 software and see how that evolves,” Bunch told the Mitchell Institute today. Kubernetes is the “containerized software” development tool the Air Force is integrating across the service to allow modular improvements in systems more securely on a faster timescale.

“I’m not the pro from Dover on Kubernetes,” Bunch joked, in explaining how AFMC was applying the software tool to upgrade F-16 aircraft. “The goal of this would be to get to the point that we have that secure mechanism to be able to integrate in and do updates in a more rapid manner — without having to do the full integration of all the components to ensure that it’s going to operate seamlessly and not have second and third order effects,” he said.

For example, Bunch noted that open mission systems are being used in the development of the B-21 stealth bomber and the Ground Based Strategic Deterrent. “Those are open-system based so that we can move technology in as technology speeds forward,” he said.

As Breaking D readers may remember, Air Force acquisition czar Will Roper is a big fan of Kubernetes and other agile software development tools as part of what he calls a “holy trinity” of innovation technology. The other two elements are: open systems architectures for both hardware and software digital engineering; and digital engineering, which uses digital tools to model not just a design but the entire life-cycle of a weapon system, all the way through development, production and sustainment.

And all three of those technologies are being put to AFMC’s “digital campaign” effort to “modernize and streamline the life cycle process of Air Force platforms and systems,” according to an AFMC press release. AFMC intends to use digital technology to modernize all of its mission sets: research, engineering, contracting, financial management, test, and logistics.

“We kicked off a digital campaign to look at how we run digital capabilities into everything that we do, from science and technology initiation, all the way through the sustainment platforms,” Bunch said.

“The campaign is focused on six lines of effort to achieve a digital ecosystem that supports agility, flexibility and speed in delivery of Air Force current and future needs. These lines of effort include integrated information technology infrastructure; models and tools; standards, data and architectures; lifecycle strategies and processes; policy and guidance; and workforce and culture,” the AFMC website explains.

Bunch said that a key to being able to push forward the digital revolution started by commercial firms, the Air Force needs to work harder to explain to contractors its needs. ”

We’ve got to communicate with these companies, to let them know kind of what we expect —  how we expect to do business,” he said. “We got to talk about we expect but we also gotta listen to what the impediments are that we’re creating. And then those impediments are ones that we need to go work.”

One of the impediments Bunch sees to making the digital transformation work is how DoD does contracting, especially the legal barriers between types of funding allowed for what specific types of work.

“I’ve been a huge proponent for colorless money. You know, I’ve never been able to really look at an IT or cyber program and clearly delineate where I go from development to procurement to sustainment, because those lines are blurred. And it’s constantly changing,” he said. “There are things that we need to work with leaders who control the color of money, and look at those rules and regulations to see what can we do so that we are moving at speed of relevancy.”

In his wide-ranging discussion, Bunch also touched on how AFMC would be re-aligned to accommodate Space Force development and acquisition.

He wouldn’t be drawn on the hot-button issue of whether the Space Force should have its own acquisition authority, noting carefully that “there are views on both sides.” However, he said AFMC, and especially Air Force Research Laboratory (AFRL), were working to ensure that there are not “artificial barriers” to the free flow of technology between the Air Force and the Space Force.

With regard to AFRL, he said, “There are some directorates that are gonna have uniformed Space Force Individuals in them. They are going to be executing programs that are gonna be priorities for the Space Force” — albeit under the aegis of AFRL, which in turn is under the Department of the Air Force. “So, we will get priorities as to what General Raymond and his team wants to be doing with S&T dollars.”

“But what we, again, want to do is not limit where the Space Force can get the technology in from, nor how the other parts of the Air Force can use those things that are developed maybe within the Space Vehicles Directorate or certain points in the center’s directorate that are going to be part of the Space Force,” he said. “The reality of it is: technology doesn’t know its application until you tell it.” (D.S.).