INCISIV National
Acasă Actualitate “Since the Department has repeatedly demonstrated its willingness to disregard congressionally mandated... 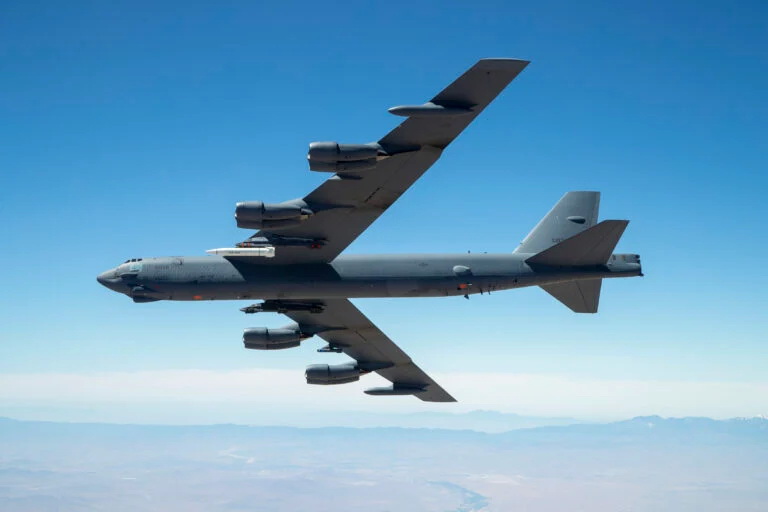 A B-52 bomber carrying the ARRW. HAC-2 fully funds the program, but criticizes AF budget management.

Noting that the service’s Future Year Defense Plan (FYDP) shows the ABMS budget jumping to nearly $1.1 billion in 2024, the House Appropriations defense subcommittee says in report language in its draft 2021 defense spending bill that it simply isn’t happy with the service’s acquisition strategy — which lawmakers suggest lacks due “discipline.” Further, the report complains that the Air Force’s ABMS budget justification documentation “poorly describes how the requested funds will be executed.”

“While the Committee acknowledges the need for a robust and agile ‘sensor-to-shooter’ network to meet the challenges of future operating environments, and supports broad principles of the ABMS approach such as open architecture and the avoidance of ‘vendor lock,’ the Committee currently lacks enough confidence in the Air Force’s structuring and execution of ABMS to support the rate of budget growth beginning with the fiscal year 2021 request,” the report states.

The skepticism about ABMS from the HAC-D should not come as a surprise, the Air Force has been hard pressed to sell the program’s novel acquisition approach to Congress. Both the House and Senate Armed Services Committees also have expressed similar concerns in their versions of the 2021 defense policy bills.

The HAC-D echoes the scathing report of the Government Accountability Office (GAO) on ABMS issued in April — a report that caused a dust up between the watchdog agency and the service following comments by Chief of Staff Gen. David Goldfein that the report had “latency issues.”

“The Committee notes several weaknesses within the current ABMS program that should be addressed before the Committee agrees to the budget growth for ABMS envisioned in the current FYDP. The Government Accountability Office (GAO) has identified several of these weaknesses, such as the absence of firm requirements, acquisition strategy, or cost estimate, as well as the unclear definition of responsibilities of the Chief Architect of the Air Force and other offices involved in executing the ABMS program,” the HAC-D says in the report language.

In particular, HAC-D is concerned the Air Force has not articulated a strategy for transitioning successful ABMS technologies into existing platforms and programs of record. As Breaking D readers know, ABMS is being designed as a family of systems to underpin DoD’s high-priority Joint All Domain Command and Control (JADC2) effort to tie together sensors and shooters on the battlefield.

“It is unclear how the costs of fully integrating elements of the ABMS family of systems will be accounted for through their lifecycles across multiple programs without simply being handed down as unfunded mandates to individual program managers. Finally, the Committee is not confident that existing Air Force programs of record have been adequately reviewed to ensure that they are consistent with the Air Force’s vision for ABMS and its requirements, to the extent they are actually known,” the report says.

Lastly, the appropriators also are worried about the potential for the costs of the three ABMS OnRamp exercises planned for 2021 to balloon — thus caps spending on each one to no more than $25 million.

HAC-D also expresses concern that the Air Force’s budget planning for the development of hypersonic missiles has been inadequate. While it would fully fund the service’s request for $381.9 million for hypersonics prototyping, it bemoans the cancelling of the hypersonic conventional strike weapon (HCSW) and what it sees as startling 60 percent cost growth in the the air-launched rapid response weapon (ARRW) since its 2018 start. The service cancelled HCSW in February.

HAC-D’s concerns about ABMS and ARRW are linked to a broader lack of trust in DoD-wide budget management as it seeks to boost modernization to counter Russia and China in a future peer conflict.

“The Committee increasingly finds that the Department-wide mantra of increasing speed and accepting greater risk in acquisition programs has not been matched by the necessary discipline when it comes to programming, budgeting, and transparency,” the report says.

Indeed, the lawmakers deep-seated lack of trust is directly cited as the reason lawmakers have rejected the Air Force’s effort to consolidate a number of research and development program elements into broad, portfolio programs with multiple sub-elements — an approach that the service also intends to push for the Space Force.

The 2021 budget request would have “eliminated funding for 14 program elements within the budget activities for applied research and advanced technology development, and consolidate funding for multiple budget program activity codes totaling approximately $955,000,000 into one existing and five new program elements,” the report states.

Noting that while lawmakers do not necessarily reject the Air Force’s intent, they are uncomfortable with the fact that this would give DoD increased authority to move funds around without congressional approval.

“The granting of additional budget flexibility to the Department is based on the presumption that a state of trust and comity exists between the legislative and executive branches regarding the proper use of appropriated funds. This presumption presently is false. Since the Department has repeatedly demonstrated its willingness to disregard congressionally mandated reprogramming procedures, the Committee cannot agree to provide the additional budget flexibility the Air Force requested,” the report states.

The full House Appropriations Committee will mark up the defense spending bill tomorrow. And of course the language will then need to be sorted out with the Senate side. (D.S.).

“As you surely know, there is a lot of emotion in this on both sides...

To find targets for its new long-range weapons, the Army is experimenting with cloud computing...

“We’ve decided that the topic is important enough and unique enough that we need a...