INCISIV National
Acasă Administratie The change would make available all Category I drones currently made by... 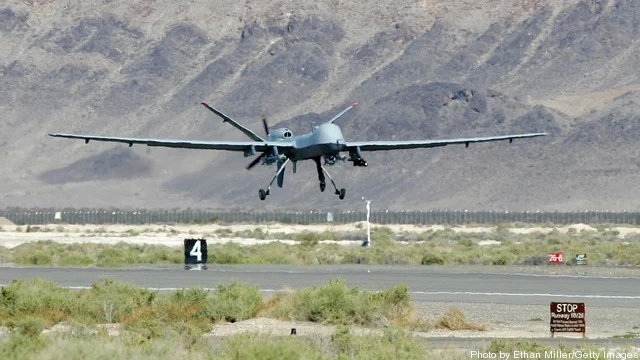 WASHINGTON: In a major shift, the Trump administration has updated its rules for selling drones to allies overseas, opening up new categories of larger and faster drones that can fly as fast as 800 km per hour, eligible for shipment to foreign countries.

The announcement has been expected for weeks. The administration has been working to revamp the rules governing the 35-nation Missile Technology Control Regime (MTCR) for at least two years in the face of increasing competition from China and Israel in the drone market.

Until now, any system capable of carrying a payload of 500 kilograms for more than 300 kilometers was subject to a “strong presumption of denial” for transfer to a foreign country. By withdrawing this “presumption of denial” for drones that fly up to 800 kilometers per hour, the range of offerings now readily available to foreign partners has expanded to almost anything the US defense industry currently produces. Systems like the MQ-1 Predators and MQ-9 Reaper can only fly at about half that speed, while the RQ-4 Global Hawk tops out at about 575 kph, well under the limit.

The change doesn’t do away with the larger oversight process carried out by the US government when selling weapons systems to partners and allies, R. Clarke Cooper, Assistant Secretary of State for Political-Military Affairs, told me Friday.

“All the proposed transfers affected by the change will continue to be subject to our regular review criteria, so this is very rigorous, [and] it’s outlined already in the UAV export policy,” Cooper said in a phone conversation previewing the change. “This is inclusive of the conventional arms transfer policy, as well as the arms Export Control Act.”

By publicizing the change to the rules by which the US government will follow, he added, “we certainly encourage members of the MTCR, as well as no0members like China as an example, to do the same.”

It’s a move that the defense industry has long lobbied for, as concerns grow over Chinese and Israeli forays into markets, tempting countries to buy drones that may not be compatible with US or NATO systems in use worldwide.

“I think the important aspect of this move by the United States is that it is transparent,” said Remy Nathan, vice president for international affairs at the Aerospace Industries Association, a trade group. “As long as we are setting a standard about what adjustments we’re making, why they’re reasonable, and how transparent we are in applying them, that’s the metric that other countries are going to also have to follow if they turn around and say well now we’re going to make adjustments.”

The change would open all Category I drones currently made by the US defense industry for export, including the long-loitering surveillance and armed systems which have played a key role in Washington’s counterterrorism fights over the past two decades.

There are many skeptics out there who don’t want the US exporting these drones more widely. Rachel Stohl, Vice President at the Stimson Center, wrote recently that “when we’re talking about capabilities that can change the nature of conflict, have generated questions and concerns about the legitimacy, legality, and strategic efficacy of their use, and directly impact civilian lives and livelihoods on the ground, more caution, not less, is warranted.” The Trump administration has been hesitant to punish governments like Saudi Arabia, who have recklessly bombed civilian targets in Yemen using US-made aircraft and weapons, raising fears that they could more cheaply use armed drones to do the same.

By widening the air speed threshold, the US is making rules only for its own potential future sales, and the new rules are not binding on the other 34 member nations party to the MTCR. And not all members appear to have supported the move. “I would say that there were certainly mixed positions coming from the different partners in the MTCR,” Cooper said. The administration talked with countries who have signed the MTCR, but “yeah, there were varying degrees of either interest or lack thereof coming from partners.”

AIA’s Nathan said that the move can expand the threshold of how the US can partner with allies, since military drones “are increasingly the subject of interest from a lot of our allies and partners for co-production and co-development, but as long as we keep saying that UAVs are missiles, that’s going to complicate our ability to work with other countries on co production and co development.” (D.S.).

Zero-trust security “is not one single product that one can purchase off the shelf” a...