Acasă Actualitate The near-term focus is on rebuilding hurricane-ravaged Tyndall AFB, but the long-term... 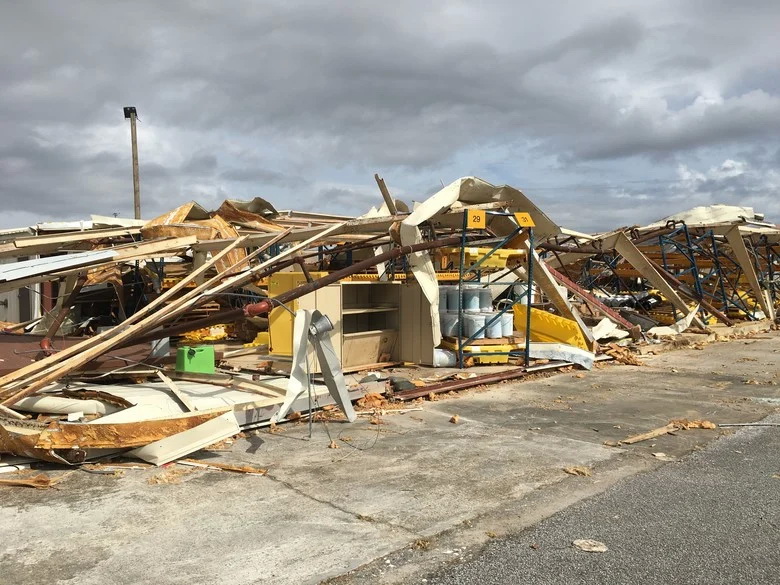 Tyndall AFB in Florida was severely damaged by Hurricane Michael in 2018.

WASHINGTON: Tomorrow, the Air Force kicks off a unique virtual conference about better ways to build and operate military bases world wide, looking to improve everything from family support, to functionality during pandemics, to resilience against attack.

The central focus of AFWERX Fusion event, running July 28-30, will be pitches from 370 companies, many of them startups, to show off tech such as artificial intelligence, 5G networks, and 3D printing related to base operations. That includes not just home front operations in the United States — although the rise of cyber warfare puts those former sanctuaries at risk — but safeguarding supply lines to expeditionary outposts.

As Breaking D readers know, the military made “logistics under attack” one of its key priorities as it refocuses on so-called all-domain operations against Russia and China, with the Air Force asking for $3 billion in 2021 to fund various efforts.

“There is not one support function, or frankly operational function, that couldn’t benefit from some aspect of machine learning applied to it,” Air Force Capt. Michael Kanaan, director of operations at the MIT Artificial Intelligence Accelerator, told reporters today.

The initial plan is for the Air Force to then choose firms for contracts to help in rebuilding Tyndall AFB in Florida, which was wrecked by Hurricane Michael in 2018. But the service is convinced that the technologies and services showcased at the event also will lead to future upgrades, not just at other Air Force bases, but those of the other services as well.

AFWERX Fusion is the annual flagship event put on by the service’s AFWERX innovation hub, each tailored to solve a set of Air Force needs.

“The cornerstone of this discussion for the week is “Base of the Future,” starting with all the things that have to happen at Tyndall Air Force Base for looking to build that base in the future,” said Col. Nathan Diller, director of the Air Force’s innovation hub AWERX. “What better place to start than a base that has been decimated?”

Diller and other members of the Base of the Future team briefing reporters today on the event said that besides the typical panel discussions and ‘challenge’ demonstrations used in previous Air Force pitch days, this year’s AFWERX Fusion also includes virtual happy hours and networking opportunities, complete with performers such as Jay Leno. One of the aims of the event, the officials explained, is to help firms connect not just with service partners but also with each other and potential funding partners.

“You have to have some sort of social element for the relationship and team building,” said Col. John Flynn, an Air Force reservist  who is vice president of administration for MGM Resorts International in Las Vegas. “So how do you socially connected when everyone is physically distanced? That’s why we’ve added virtual happy hours, you have workshops, and the showcase that I mentioned, they’ve been integrated throughout the agenda. We think that’s critically important.”

The event is being co-hosted by Flynn and actress Krista Kleiner, a former Miss Philippines. (Theresa Hitchens).

„The report does not claim that China’s military is currently 10 feet tall,” but „Beijing...