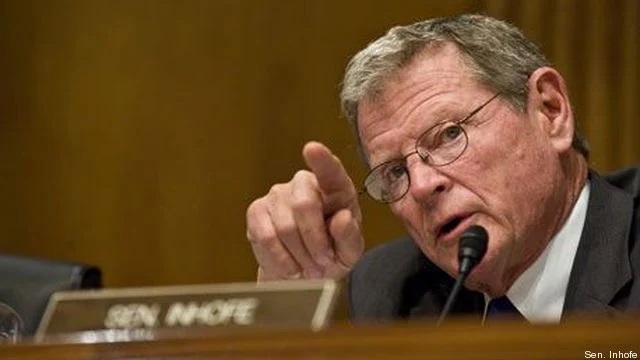 In a statement sent 15 minutes before the hearing was to begin at 9:30am, Sen. Jim Inhofe said “there are many Democrats and Republicans who didn’t know enough about Anthony Tata to consider him for a very significant position at this time,” despite Tata having been nominated for DoD undersecretary for policy six weeks prior.

Tata was facing across-the-board Democratic opposition and increasingly shaky support among Republicans due to a series of inflammatory Tweets about former President Obama, Islam, and accusing former CIA Director John Brennan, without evidence, of working to order Trump’s assassination.

In his statement this morning, Inhofe put the onus on the Pentagon for not getting information to his committee on time. “We didn’t get the required documentation in time; some documents, which we normally get before a hearing, didn’t arrive until yesterday. As I told the President last night, we’re simply out of time with the August recess coming, so it wouldn’t serve any useful purpose to have a hearing at this point, and he agreed.”

The delay moves the potential hearing to September, in the heat of the presidential and congressional re-election campaigns, and might kill the nomination altogether.

Sen. Jack Reed, the committee’s ranking Democrat, said in a statement this morning that “we’re a bipartisan committee. It’s fair to say members on both sides of the aisle have raised serious questions about this nominee. We had a closed door session on Tuesday and today’s public hearing has now been cancelled. Chairman Inhofe did the right thing here, and it’s clear this nomination isn’t going anywhere without a full, fair, open hearing.”

Tata, 60, was nominated after the White House ousted John Rood in an ongoing purge of officials not considered loyal enough to Trump. Tata served 28 years in the Army, retiring in 2009 after a career that included a rotation as the deputy commanding general of the 10th Mountain Division and an Afghanistan deployment. His career skidded to a halt after an Army investigation concluded he had at least two extramarital affairs and falsified a legal document.

In a series of Tweets in 2018, Tata called Islam the “most oppressive violent religion I know of,” and said that Obama was a “terrorist leader” who did more to harm the United States and “help Islamic countries than any president in history.”

In 2018, Tata tweeted at Brennan that he should “pick his poison,” including execution or just sucking “on a pistol.”

His commentary on Fox News and strong defense of the president endeared him to Trump, a voracious cable news watcher always on the lookout for praise or condemnation on news shows.

In an unusual arrangement, Tata was also named as a senior advisor to Defense Secretary Mark Esper, though it is unclear what, precisely, his role is. His nomination has widely been seen as driven by the White House, rather than the Pentagon. A Pentagon spokesperson did not respond to a request for comment on Tata’s status as an Esper advisor. (Paul McLeary).

PTS is not a satellite per se, rather it is envisioned as a payload that...

Britain has recorded its lowest increase to the Covid-19 death toll in weeks, and London’s...