Acasă Actualitate “I’m optimistic, based on my discussions with Jon Hill, that we’ll... 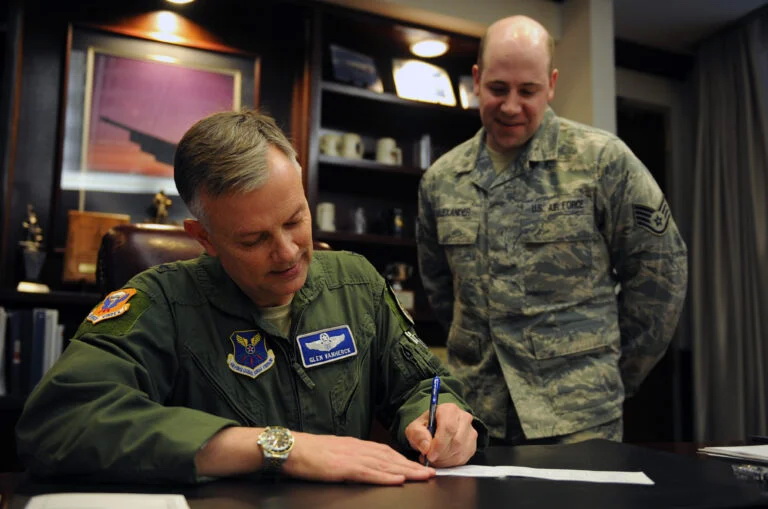 WASHINGTON: The nominee to take over Northern Command (NORTHCOM), Lt. Gen. Glen VanHerck, says he believes the Missile Defense Agency is taking steps that will speed acquisition of the Next-Generation Interceptor (NGI) to guard against a capability gap, as well as provide an “under layer” as backup.

“I’m encouraged, and will continue to work with the committee, the Missile Defense Agency, and the Department to minimize any gap,” he told the Senate Armed Services Committee yesterday during his confirmation hearing.

VanHerck explained that he discussed the issues last week with Vice Adm. Jon Hill, MDA’s director, noting that Hill “is looking forward” to receiving next month industry responses to the April 24 request for proposals for NGI.

“I’m optimistic based on my discussions with Jon Hill, that we’ll potentially see the Next-Generation Interceptor move further left and not have the significant gap that you’re referring to,” he said in reply to questions from Sen. Deb Fischer. The Republican Senator from Nebraska represents Vandenberg AFB where (along with Alaska) the aging interceptors making up the US Ground-Based Midcourse Defense System are housed.

VanHerck said that Hill also assured him that the planned service life-extension of the current ground-based interceptors would “bring additional capabilities and also redundancy to the system.”

“So I’m encouraged by that, that it would prevent any gap,” he added.

Further, he said, MDA intends to undertake a series of tests this winter to assess the potential of the Navy’s Standard-Missile 3 (SM-3) carried by the Aegis destroyers, and the Army’s Theater High-Altitude Areas Defense (THAAD) system as possible backups for homeland defense purposes. Currently, SM-3 and THAAD are designated for regional missile defense.

“With regards to the under layer that you’re talking about,” he told Fischer, “I also talked to Jon about that. And there’s a test upcoming in the wintertime that’ll take a look at some additional capabilities — a Navy capability and potentially an Army capability, specifically the SM-3 and the THAAD — that will give us an additional under layer capability.”

He stressed, however, that a decision is “TBD,” noting that “we need to see that test first.”

NGI is intended to replace the troubled, multi-billion Redesigned Kill Vehicle program killed in a surprise move by former DoD head of research Mike Griffin in April. Speeding up NGI has been a top priority for outgoing NORTHCOM chief Gen. Terrence O’Shaughnessy. In testimony to the SASC in February on the Pentagon’s 2021 budget request, O’Shaughnessy blasted the current timeline for NGI that is not expected to see deployment until 2030.

“I am very dissatisfied that it is going to take us 10 years to actually produce the Next Generation Interceptor. Our adversaries are building capability and capacity, and so we have to be able to respond,” he said.

Both sides of Capitol Hill share that concern. The Senate and House versions of the 2021 National Defense Authorization Act contain a plethora of provisions designed to prod DoD action on NGI and a back-up system, as comprehensively laid out by colleague Jen Judson on Monday

VanHerck said he’s convinced that 2030 is simply not acceptable for NGI deployment. “I remain concerned, just as Gen. O’Shaughnessy,” he said.

VanHerck is expected to be confirmed easily, with SASC Chairman James Inhofe saying yesterday that “there is no opposition that I know of” to either VanHerck or the nomination of Lt. Gen. James Dickinson to head Space Command. (Theresa Hitchens).