Acasă Actualitate As the Pentagon starts planning to pull troops out of Germany, and... 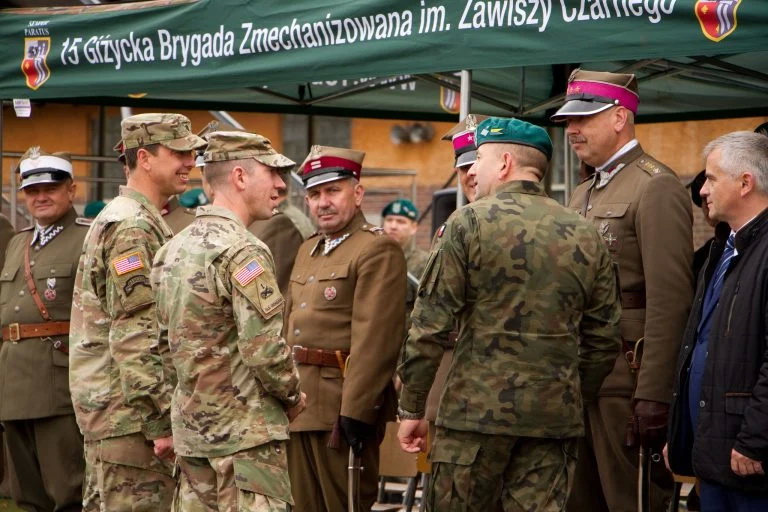 American and Polish soldiers during an exercise at a Polish base.

WASHINGTON: The Polish government will pay the majority of costs associated with stationing 5,500 US troops at bases within its borders as part of a new security cooperation pact, the Pentagon has confirmed to Breaking Defense.

The deal comes as the Trump administration keeps prodding longtime allies like South Korea and Japan to pay more of the costs of tens of thousands of US troops within their borders, while President Trump has complained that countries like Germany don’t meet defense spending goals outlined by NATO.

But Poland, which already meets the NATO-mandated goal of spending 2 percent of GDP on national defense by 2024, has agreed to take more US forces, aircraft and drones while footing what is likely to be a hefty bill to build infrastructure for those forces as they flow in and out of the country on a rotational basis.

Warsaw “has agreed to fund infrastructure and logistical support to U.S. forces in Poland, including the current 4,500 rotational forces and the planned increase of 1,000 additional rotational forces,” Lt. Col. Thomas Campbell, a Pentagon spokesperson said.

The final amount isn’t clear. The Enhanced Defense Cooperation Agreement has been agreed to, but will not be signed for several weeks yet, and no infrastructure improvements that might be needed have not been started. Iin broad terms, Poland has agreed to fully fund infrastructure for:

In a Monday morning statement, Esper said the new deal “will enhance deterrence against Russia, strengthen NATO, reassure our Allies, and our forward presence in Poland on NATO’s eastern flank will improve our strategic and operational flexibility.”

The Polish deal comes as the US is in the early stages of planning to pull 12,000 troops from Germany and remains locked in a spending dispute with South Korea over Trump’s demand Seoul pay more to keep the 28,500 American forces in the country.

During a Pentagon briefing last week, Defense Secretary Mark Esper and Vice Chairman of the Joint Chiefs  John Hyten repeatedly made the case that moving the Germany-based troops back to the US, Belgium and Italy, is a strategic decision that will benefit the US and NATO. Within minutes of that press conference however, Trump contradicted his military leaders from the White House lawn, saying he ordered the pullout so the US won’t be “suckers…so we’re reducing the force because they’re not paying their bills. It’s very simple, they’re delinquent.”

Trump again conflated the 2 percent NATO pledge with payments to the alliance itself. Germany, despite being the wealthiest nation in Europe, continues to fall well below that mark.

Relying on Polish construction efforts has recently cost the Pentagon about $100 million in cost overruns however.

Europe’s second Aegis Ashore site based in Redzikowo, Poland, was supposed to be up and running in 2018, but problems with local contractors have pushed that back to 2022 and will cost the US an additional $96 million in 2021, according to budget documents. The Missile Defense Agency stopped paying the contractor in the spring due to the schedule slippages; work has since resumed.

Stepping in to foot the bill — while fulfilling its NATO pledge — Warsaw is ticking off all the boxes demanded by the White House to maintain and improve its relationship with Washington.

Esper has recently acknowledged he is considering “adjustments” to the American military presence in South Korea, but clarified that he has issued no order to withdraw troops, despite reports suggesting a drawdown is being considered by Pentagon leadership.

Under the previous agreement between the US and South Korea, which ended in December, South Korea agreed to pay $870 million for 2019. The Trump administration originally demanded $5 billion in 2020 to keep the US footprint as is. That was rejected by the South Korean government, who then agreed to pay the salaries of thousands of Koreans who had been furloughed from their jobs on American bases. Since that tweak, talks between the two sides have stalled. (D.N.).

“Rather than imposing specific requirements, SPD-5 affords all government stakeholders a policy framework to implement...