Acasă Actualitate Poland is excited to have more US troops on the way, but... 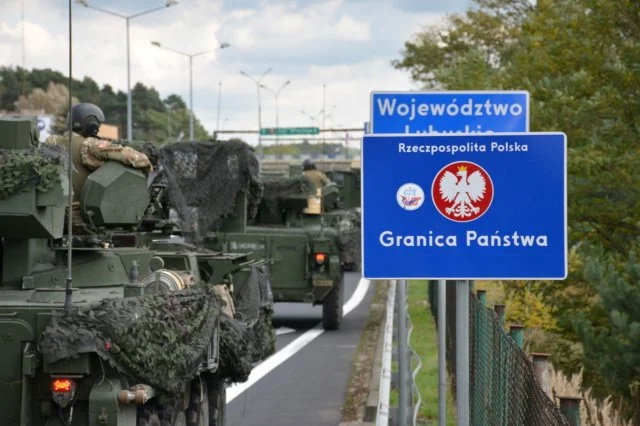 Elements of the US 2nd Cavalry Regiment cross into Poland.

WASHINGTON: The United States will station a permanent garrison of troops in Poland, according to an agreement reached today between Washington and Warsaw. The announcement of the pact came just days after the Pentagon announced it was pulling 12,00 troops out of Germany.

It’s not clear how long it will take to implement the growth of the US footprint in Poland from the current 4,000 troops to 5,500. But the move will require some heavy logistical lifting, including new facilities for US drones, helicopters, an armored brigade combat team, and special operations forces.

Details remain scarce, but the Polish government has long pushed for a larger American footprint, and the Trump administration’s frustration over Germany’s failure to reach NATO-suggested funding goals has forced the Pentagon to look elsewhere for basing options.

Poland’s Minister of National Defense Mariusz Blaszczak emphasized the importance of this agreement, saying Friday, “we’ll soon sign a final agreement on the endur[ing] presence of U.S. troops in Poland.”

There were expectations that the deal would be signed with Policy President Andrzej  Duda visited Washington last month, but negotiations stretched on longer than anticipated.

Agreements like this are difficult to hash out, given the complex legal considerations that require host nations to accept having US government-run facilities off-limits to its citizens, along with the safety, force protection, logistics, and housing requirements of the US military.

Under the agreement, a division command will be housed at Poznań, while a training center will be located at Drawsko Pomorskie, a frequent host of multinational NATO exercises. There will also be an Air Force logistics hub, a headquarters for a rotational Combat Aviation Brigade, two separate special ops facilities, and another base near the German border that will house an Armored Brigade Combat Team.

The new bases come in addition to the work that will need to be done by European Command in the coming months to begin moving 12,000 US troops out of Germany to bases in Belgium, Italy, and the United States. An outline of the German pullout plan was delivered by Defense Secretary Mark Esper this week, calling for 2,000 troops from the EUCOM and special operations headquarters in Stuttgart, Germany to relocate to Mons, Belgium.

In addition, 4,500 members of the Second Cavalry Regiment in Germany will return to the US, and then begin rotations in the Black Sea region. Elsewhere, the 2,500 airmen scheduled to deploy to Germany from the U.K. will remain in the U.K., while an F-16 squadron will be sent to Italy.

Despite the urgent tone of Esper’s address, it doesn’t appear much of this movement will happen soon.

AFRICOM commander Gen. Stephen Townsend also issued a statement Friday affirming the process is in its infancy, and decisions are months away. “It will likely take several months to develop options, consider locations, and come to a decision,” on where the Stuttgart-based command will move, though “the command has started the process.”

The statements track with comments made by the Vice Chairman of the Joint Chiefs, Gen. John Hyten, earlier this week, where he underscored the reality that no movement will happen quickly.

“What we have right now is really a concept ― a concept that we’ve shared with our allies, shared with the Congress, and we shared inside the department fairly widely. We now have to turn it into plans. As you turn [it] into plans, we have a very structured process involving the Joint Staff, the office of the secretary, and the combatant commands and the services, to make sure we understand what those are, then we’ll lay in the costs.”

While Esper estimated the costs to be less than $10 billion, the movement of so many forces will be time-consuming, complicated, and expensive. Moving to Mons will likely require building entirely new facilities to replace or add to the handful of aging, 1960s-era buildings that exist there now.

Former DoD official Jim Townsend, senior fellow in the CNAS Transatlantic Security Program, said that the proposed movements to Belgium and Italy — if they’re possible — will be unlikely to happen quickly, and will have to wait on political agreements to be signed first.

Mons “is a village where they’re going to have to do a lot to account for all these people coming,” he said.  “The Pentagon hasn’t even put out an RFP [Request For Proposals] to build a new housing and facilities.” Without those basic logistical hurdles, any larger movements are years away, he said.

Likewise, he said, moving the air wing from Germany to Aviano, Italy, “will require new hardened shelters, fuel storage facilities, and additional housing at the base.” None of that planning has happened yet.

The words of caution from the uniformed military about the proposed moves underscore the massive political, logistic, and physical lift the movement will entail. And as shown by the two-plus years of negotiations with Poland to move 1,000 more US troops there, forging new legal agreements with the Belgian and Italian governments will take time, with no guarantee that an agreement can be reached. (A.R.).

The Observe and Orient steps of the OODA Loop are the heart and soul of dogfighting—the two most critical elements in the OODA sequence....

Offering Ground-Stations-as-a-Service means customers are only obliged to pay for the amount of time they actually need to use on the station.

Special Forces SATCOM for the Most Dangerous Missions in the World

Despite COVID-19, the SB>1 Defiant team is testing furiously to catch up with archrival Bell’s...