Acasă Administratie Contractors are already “bending metal” on components for both 50-kilowatt and 300-kW... 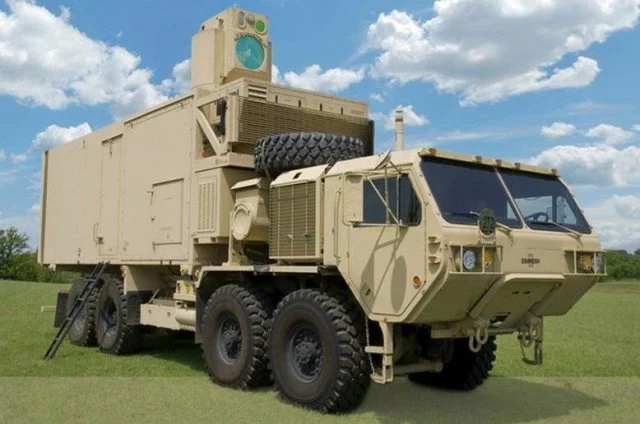 WASHNGTON: After years of lower-power field tests and more than one thousand hours of soldier feedback, the Army is on track to field-test two different types of high-energy lasers in 2022: a 50-kilowatt weapon to destroy enemy drones and incoming artillery rockets, and a 300-kW weapon that could potentially shoot down cruise missiles.

Key components are now under construction for both systems, the directed energy chief at the Rapid Capabilities & Critical Technologies Office said. And, Craig Robin told me ahead of today’s Space & Missile Symposium, the service plans many more “soldier touch points” to come on both programs, especially once the prototypes are built and available for field tests.

Furthest along is the 50-kilowatt laser, to be mounted on an 8×8 Stryker armored vehicle. It’s known in Army jargon as DE-MSHORAD (Directed Energy – Maneuver Short-Range Air Defense). Four prototype laser Strykers – a full platoon – will be fielded to an actual combat unit in 2022.

“That’s real hardware being built now,” Robin said. “The laser weapon hardware exists now; we expect to have them integrated on the vehicles by the end of December.”

In fact, there are two competing lasers being built for DE-MSHORAD, one by Northrop Grumman and the other by Raytheon. Each of those lasers will be integrated onto a different Stryker for a “shoot off” – officially, a “performance characterization” – at Fort Sill, Okla. in May 2021, when real soldiers will put both weapons through their places in a realistic combat scenarios.

Earlier Stryker-mounted lasers successfully shot down drones in prior field tests with real soldiers. Troops’ input in field tests, brainstorming sessions, and reviews of CAD designs, Robin told me, helped refine everything from the user interface controlling the weapon, to how equipment should be installed inside the Stryker so the crew wouldn’t hit it scrambling in and out. Power output has also risen rapidly in recent years, from just two kilowatts in 2016 to five, to 10, to the 50 kW weapons now being built.

Prime contractor Kord Technologies will integrate both the Raytheon and Northrop weapons, plus a power & thermal management system by Rocky Research, onto the Stryker, with assistance from the vehicle’s original manufacturer, General Dynamics Land Systems. The laser-armed DE-MSHORAD will operate alongside the Leonardo DRS IM-SHORAD variant of the Stryker – now in testing – which wields a more traditional anti-aircraft armament of guns and missiles.

The Strykers, being off-road armored vehicles, are intended to follow the frontline M1 tanks and Bradley troop carriers. At the same time, the Army is also developing a second echelon of larger lasers mounted on heavy trucks, which trade Stryker’s mobility and protection for sheer carrying capacity. This IFPC-HEL (Indirect Fire Protection Capability – High Energy Laser) will work alongside a missile-armed IFPC variant and a high-powered microwave variant – probably based on Air Force experiments – to defend forward command posts and other key sites.

Starting with a truck-mounted 10-kilowatt weapon in 2012, the Army first proposed a 100-kW model and then – boosted by a collaboration with the Office of the Secretary of Defense – decided to go for 300 kW.

“We’re on track to demo the 300-kW system at the end of 2022,” Robin told me, probably around August or September.

Critical Design Review is complete and “we’re starting to bend metal,” he said. “We’re moving out and starting to build that demonstrator now, along with OSD.”

OSD’s assistant director for directed energy, Thomas Karr, is leading a multi-service push to scale up laser technology to 300 kW and beyond, enough to kill incoming cruise missiles. Karr has multiple contractors developing competing approaches, but under his aegis, the Army specifically is working with aerospace titan Lockheed Martin to build the laser itself and with Dynetics to integrate it onto an Oshkosh 10-wheeler truck, the Palletized Load System.

If the 2022 demonstration shots go well – and the soldiers’ feedback is positive – the Army plans to build and field four HEL-IFPC laser trucks as a combat unit in 2024. (D.N.).

The Observe and Orient steps of the OODA Loop are the heart and soul of dogfighting—the two most critical elements in the OODA sequence....

Offering Ground-Stations-as-a-Service means customers are only obliged to pay for the amount of time they actually need to use on the station.

Instead of the Joint AI Center building everything in-house, the JAIC is creating technical and...

The “warfighter localization sensor” from Robotic Research pinpoints your location, and you comrades’, without relying...

From throwable cameras to magnetic brakes, from disease prevention to battlefield networks, these small businesses...