Acasă Anchete “The AI technology behind this enabled the US Navy to quickly and... 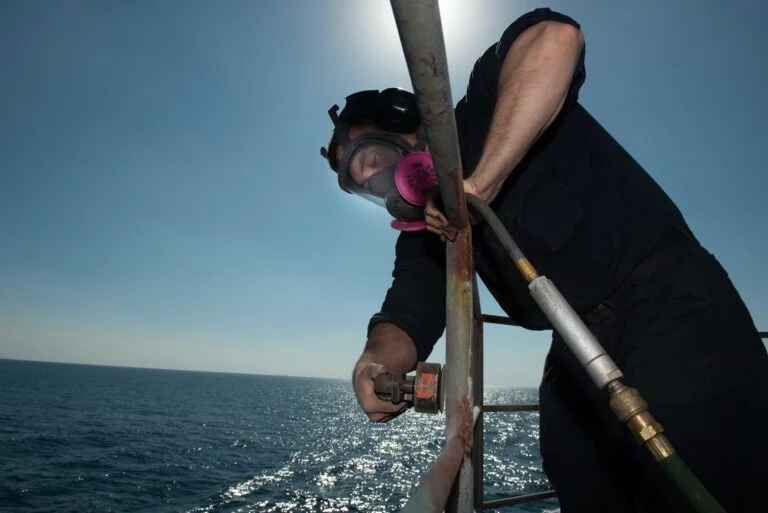 A Seaman grinds away rust from a railing on the fantail aboard the aircraft carrier USS John C. Stennis. A new contract will use drones and AI to improve rust inspections on Navy ships.

ALBUQUERQUE: The Navy is using Google Cloud to speed up a basic but time consuming task: finding and identifying rust. This approach has already been applied to inspect wind turbines and find potholes in roads, and promises advantages both in speed of inspection and in future predictive maintenance.

“The AI technology behind this enabled the US Navy to quickly and seamlessly examine tens of thousands of images to prioritize the needs to be repaired immediately and or later on,” Mike Daniels, vice president of Global Public Sector, Google Cloud, told me in an interview.

While Google was unwilling to disclose the exact value of the contract, the promise is that speedy, AI-enabled inspections will lower labor and material costs of inspection and repair enough to more than justify the expenditure on inspection AI.

“The tools we’re providing can not only save the Navy billions each year, but significantly improve readiness and speed deployment,” said Daniels. “And this is a physical job right now. We’re improving results for the inspectors.”

If AI-facilitated rust inspection can reduce the amount of time a ship needs to stay in harbor for repairs, it can narrow the window in which catastrophic disasters, like the fire which tore apart the Bonhomme Richard, can happen.

This work is being done through Simple Technology Solutions (STS), who was awarded the work as a Phase 1 Small Business Innovation Research project. To train the AI, STS flew a drone on inspections to get images of rust. Next, STS combined these drone-filmed images with public domain images of ships, and uploaded both sets to a Google Cloud server.

Specifically, the inspections will look for broad area rust and corrosion, as well as subtler damage that human eyes might skip over, like pitting or focused damage.

Using native machine learning built into the Google Cloud, STS could then train the algorithm to process, understand and identify rust in the images. This is an iterative process, one where every uploaded inspection improves the accuracy of the next inspection.

“There’s no classified data that’s going to be handled as part of this project,” said Daniels, noting that Google offers a high level of protection for images stored in its cloud by default.

As we have seen in the past, aggregated unclassified data can sometimes be enough to reveal classified information, but the immediate utility of cloud-powered inspections should offset any distant concern of weakness revealed through corrosion maintenance.

Most importantly, the inspection tool promises savings in time. A widely-cited 2014 report from the US Navy attributed the cost of fighting rust and corrosion at $3 billion.

Some of that cost is hard to shake: the paint used to cover rust-scrapped areas can cost as much as $250 a gallon. Catching corrosion quickly and early shortens the amount of time humans need to work to fix a vessel, and should reduce the area that needs repair for each inspection. (Kelsey Atherton).

Why is Cygnus Unique?