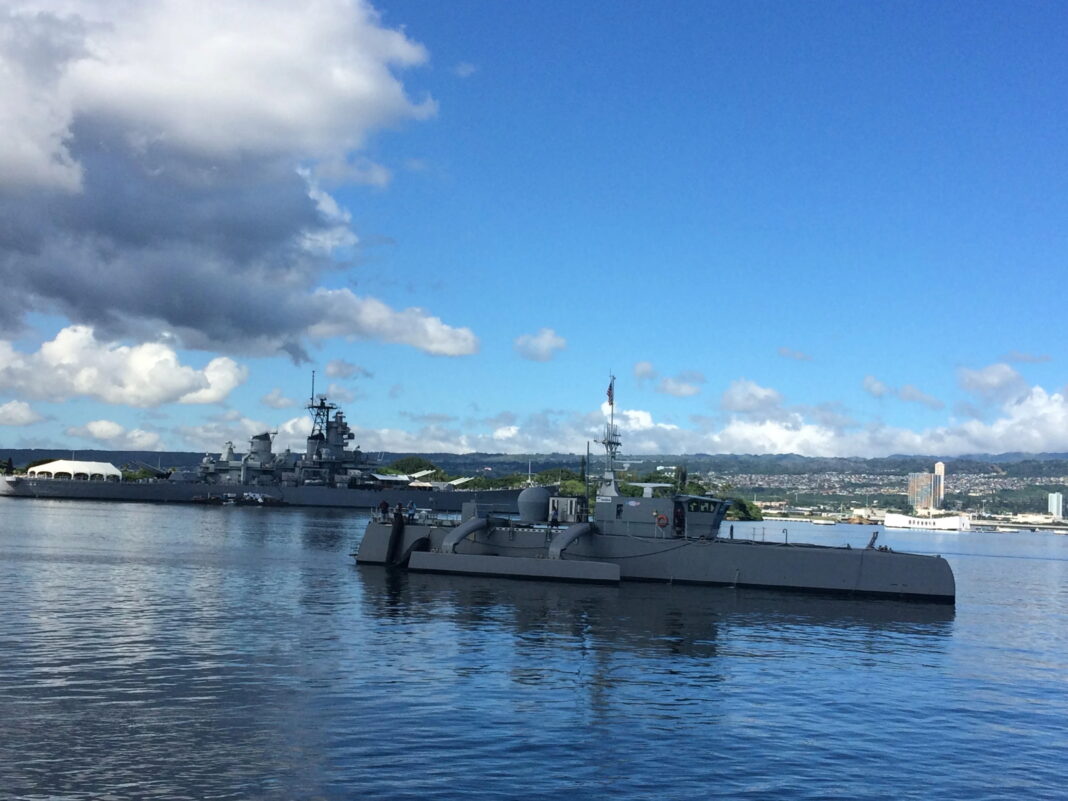 The experimental unmanned Sea Hunter is the forerunner of the Navy’s proposed fleet of robotic warships.

WASHINGTON: The Navy took another step toward building a fleet of robotic ships today, awarding several shipbuilders contracts worth a cumulative $41 million to begin developing requirements and potential designs for a new class of Large Unmanned Surface Vessels.

The LUSV has been the object of sustained interest from members of Congress wary of the Navy’s spotty track record of building first-in class ships, who’ve demanded the service take it slow and get its requirements in order before bending steel.

The ship is being envisioned as a critical part of a radically modernized fleet that will rely heavily on unmanned ships to scout ahead of manned vessels, conduct electronic jamming and deception, launch long-range missiles at targets found by other forces, and act as a picket line to keep Chinese and Russian ships and submarines away from American aircraft carriers, and far-flung bases.

Today’s contracts are a mix of requirements analysis and alternative design approaches that will help the Navy figure out exactly what it wants, and avoid the ire of skeptical lawmakers who are watching the program closely.

Huntington Ingalls; Lockheed Martin; Bollinger Shipyards; Marinette Marine; Gibbs & Cox Inc.; and Austal USA were each awarded $7 million contracts for the LUSV studies. Each contract includes an option for engineering support, that if exercised, would bring the cumulative value to to $59 million.

The bipartisan consensus is aimed at putting pressure on the Pentagon to deliver long-delayed shipbuilding and modernization plans, and reflects a wider uneasiness on Capitol Hill over the Navy’s ability to build first-in-class ships on time and on budget.

The awards today are part of the effort to take a relatively slow approach to buy the new ships, which are envisioned as coming in about 200 feet to 300 feet in length and having full load displacements of 1,000 to 2,000 tons. The idea is to use existing commercial ship designs to build low-cost, high-endurance, reconfigurable ships capable of carrying a variety of anti-ship and land-attack missiles.

But in the 2020 budget, Congress mandated that the Navy wait on designing the vertical launch tubes until the basic design of the ship was finished, and they were briefed by the Navy’s top acquisition official.

The Navy is using a mix of land-based prototyping and at-sea experimentation to build requirements for the LUSV, something it failed to do on the USS Gerald Ford, the first of the new Ford-class of aircraft carriers. That $13 billion ship has already gone over budget, and is years behind schedule, due to the lack of land-based testing for critical new technologies.

Navy spokesman Capt. Danny Hernandez told me today the service “is pursuing this balanced approach in consultation with Congress and in part in response to Congressional concerns.”

The LUSV is following on the heels of the Medium Unmanned Surface Vessel program, which saw a $34.9 million contract award in July to L3 Technologies Inc. for a prototype for what could be as many as 40 ships. The contract included an option for up to eight additional ships, making the contract potentially worth $281 million through June 2027.

The Medium USV will likely clock in at between 45 to 190 feet long, with a displacement of roughly 500 tons. The medium ships will likely serve the role as mission modules revolving around intelligence, surveillance and reconnaissance payloads and electronic warfare systems.

As of right now, the Navy isn’t prepared to deploy or sustain a new fleet of unmanned vessels, Capt. Pete Small, program manager for unmanned maritime systems said in May. “Our infrastructure right now is optimized around manned warships,” Small said. “We’re gonna have to shift that infrastructure for how we prepare, deploy, and transit” over large bodies of water before the navy begins churning out unmanned ships in greater numbers, he added. (D.N.).

The Real Lessons of the 75th Anniversary of World War II

“We’ve built an operating system that everyone can build applications for – from Raytheon to...