Acasă Anchete “Every man on the mission that night was engaged in their own... 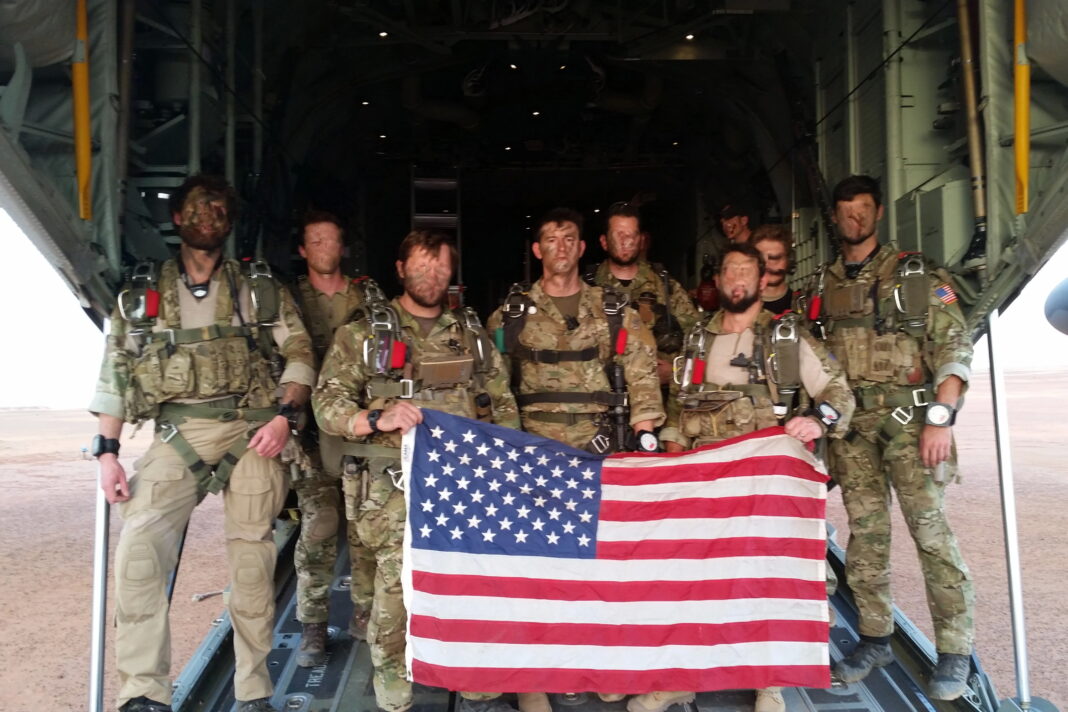 Sgt. Maj. Thomas “Patrick” Payne, center, and his teammates prior to a free fall jump.

The back ramp of the CH-47 Chinook helicopter dropped and U.S. and Kurdish Special Forces commandos rushed out into a swirling vortex of sand and rotor wash. Even with night vision goggles they moved blindly at first, and immediately began taking machine gun fire from the nearby prison complex. As rehearsed, the commandos quickly split into two assault groups to attack separate buildings where ISIS terrorists were holding more than 70 hostages.

In a hostage rescue surprise and speed are the coin of the realm, and the first assault team was momentarily slowed and almost pinned down by interlocking fields of enemy fire. Sensing hesitation, Master Sgt. Joshua Wheeler looked back at his team, motioned forward and shouted: “On me!”

In the second assault group assistant team leader Sgt. 1st Class Patrick Payne heard the “man down” call over the radio, and immediately dispatched his medic.  The Kurdish fighters in his attack cell seemed disheartened by the quick news of casualties. Then another American commando stepped forward, swept his arm around the group and then pointed for them to look him in the eyes.

Payne’s team made it to the objective and quickly cut the lock on the prison door, freeing nearly 40 hostages. The expressions of joy and surprise on the faces of the Iraqi prisoners, many of them weeping, were stunning. But Payne and his team still had a job to do.

The sound of a furious firefight at the first objective, 30 or 40 yards away, was intense. At that moment Payne received the call for help over the radio that would change his life. He looked at his teammate, and nodded towards the deafening sound of gunfire.

“Let’s get into the fight,” was all Payne said.

On September 11, 2020, on the anniversary of the 9/11 attacks that launched the United States’ global war against terrorists, now Sgt. Maj. Thomas “Patrick” Payne travelled to the White House to receive the Medal of Honor, the nation’s highest award for valor, for his actions on October 22, 2015, in one of the largest hostage rescues in history.

For good reasons, hostage rescue missions have an almost mythic status in the lore of Special Forces worldwide. Successfully rescuing prisoners from a determined enemy requires air-tight intelligence, matchless tactical proficiency and bravado. Add speed, stealth and not a little luck. The stakes are always life and death.

For instance, the 1976 raid on Entebbe by Israeli commandoes, who freed more than 100 Jewish hostages from Palestinian terrorists in hostile territory in Uganda, solidified the reputation of the Israeli Defense Forces as world class. By contrast the failure of U.S. Special Forces to rescue American hostages held by Iran in 1980’s Operation Eagle Claw was a stark blow to the prestige of the U.S. military and a major factor in the creation of U.S. Special Operations Command (SOCOM) in 1987. From SOCOM’s inception hostage rescue has been a top training priority.

When the Special Operations Joint Task Force in Iraq was approached by the Kurdish Regional Government in October of 2015, it they swung into action. Intelligence photos revealed freshly dug mass graves at a prison in the northern Iraqi town of Hawija, where ISIS was holding more than 70 Iraqi hostages. Everyone understood the urgency. One year before ISIS terrorists had massacred an estimated 1,700 captured Iraqi Army cadets and militiamen at Camp Speicher near Tikrit, machine gunning them into ditches and graves in  one the deadliest acts of mass murder in modern history. The atrocity was a major indication that ISIS was determined to make barbarity its brand.

“In combat you are constantly studying the enemy, and the enemy is constantly studying you, but conducting a hostage rescue mission behind enemy lines at night is something we prepare to do every single day at Special Operations Command,” Payne told Breaking Defense in an interview. They start from the simple conviction that failure is not an option.

“When the Kurdish government reached out for our assistance in a hostage rescue mission, we all considered it a ‘no fail’ mission. We were not going to fail our partners,” said Payne in the interview. “We knew it was highly probable that those hostages would be executed if we didn’t action that target. And we considered it our duty to bring those people home.”

The radio call from a teammate for help at a critical moment in the mission triggered a profound determination in Payne.

“This was a man I knew, and a great teammate, and it was understood that we would be there for each other, and for our partners. That moment was when I hit another warfighting gear that I didn’t know I had,” Payne said.

The second building holding hostages was already on fire when Payne and another U.S. commando approached in the night. ISIS fighters were barricaded inside the prison, holding the assault team at bay with constant machine gun fire. The attackers were also taking fire from an ISIS position to the west.

Payne and his colleague climbed a ladder to the roof of the building, looking for another way in. They used grenades and small arms fire from above to try and silence the machine gun. Then Payne heard screams of “Allahu Akbar!” from inside the building, and felt as much as heard the explosion of suicide vests. The building teetered on the verge of collapse.

Once on the ground again Payne and his team tried unsuccessfully to breach the building’s fortified walls and windows, and several of the Kurdish commandoes were hit by enemy fire in the attempt. There was fire and smoke everywhere. Time was running out for the hostages.

Near the front entryway several Kurdish commandoes had already been wounded by enemy fire, but Payne was able to see inside to a hallway. The main prison door had the same type of lock that he had broken through in the first building. And Payne still had his bolt cutters on him.

“What do you got?” his sergeant major asked, appearing at his side.

“Sergeant major, I got the same prison door as the one in the building I just liberated!”

“Okay, I got it!” the sergeant major said in combat shorthand.

Payne knew that meant the sergeant major had his back. As the man moved into position next to the entryway to lay down covering fire against the ISIS fighters, Payne gripped the bolt cutters tightly. Then he ran into the burning building to the sound of gunfire all around.

Payne managed to cut the first lock on the prison door and was coughing and nearly overcome by smoke inhalation when he staggered out of the burning prison building. Once outside he handed the bolt cutters to a Kurdish commando, who tried unsuccessfully to cut the second lock before bolting out of the building.

With only minutes to spare before the hostages would be burned to death, Payne seized the bolt cutters and once again ran back into the inferno. The smoke inside the building had dropped to below his waist, and the acrid air burned in his lungs. Yet somehow he found the strength to cut the second lock and kick the door open.

The hostages inside were coughing and weeping, many of them disoriented and too afraid to move in the midst of so much gunfire. Payne forcefully directed the group to the entryway, physically grabbing and pulling some of them towards the doorway as enemy fire tore through the walls. Outside his teammates created a human wall, standing shoulder to shoulder and using their body armor to shield the hostages from ISIS fire as they streamed from the building.

Payne entered the burning building two more times to guide the last disoriented hostages to safety, ISIS fighters still firing from their barricaded positions in the rear of the prison. He appeared in the smoke filled doorway a final time, and then issued the call that everyone on the raid was anxiously waiting to hear.

Over nearly a score of combat deployments, Sergeant Major Payne has fought on virtually every front in the United States’ global war against extremists and terrorists. He insists his actions at the prison compound on October 22, 2015, were just what all of his teammates expected of each other.

“Every man on the mission that night was engaged in their own unique problem set. My teammates were also looking for some way to liberate those hostages,” said Payne. “I just happened to be the man at the right place with the bolt cutters. So I had to find a way to capitalize on the opportunity that I was given.”

Yet especially for Special Operations Forces, there is something about hostage rescue missions that speak to the ethos of the organization. In that sense the Hawija prison raid that successfully rescued more than 70 people from the murderous grip of would-be ISIS executioners rightfully takes its place in the mythic lore of the profession.

“It was an honor for me to participate that night, because you live for hostage rescues,” said Payne. “When you look back on that night, it embodies the selfless service of my teammates. Especially Sergeant Joshua Wheeler. They put the lives of the hostages above their own. When you think about Army values like duty, personal courage and selfless service, that’s what stands out to me about that mission.”

Payne thinks often about the sacrifice inherent in those values and that level of commitment, and for good reason. When he and Alison’s second son was born, they named him Josh in memory of a fallen comrade. (A./R.).

“We’ve built an operating system that everyone can build applications for – from Raytheon to...