Acasă Actualitate “I would say that it’s not the fact, in itself, that we... 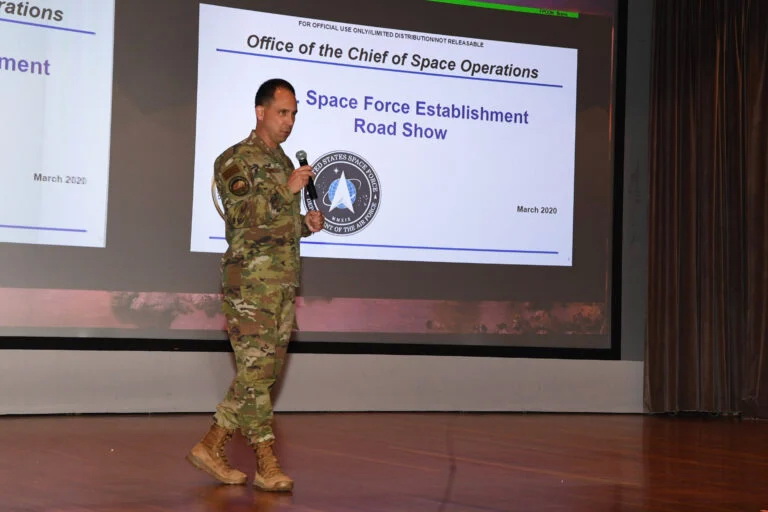 WASHINGTON: Over the past few years, US and allied militaries have converged as never before around fears of growing Russian and Chinese threats to space, DoD and outside experts say. But fundamental disagreements about how best to respond to the threats remain, with US allies facing much stronger domestic political resistance to the idea of space war.

This is creating a bit of schizophrenia in public messaging by Pentagon space leaders. On the one hand, senior officials have been blasting a clarion call for building up space warfighting capabilities as they seek domestic (read congressional funding) support for the new Space Force and Space Command. On the other hand, they are trying to dampen concerns among allies — or at least their skittish publics — about what some perceive as aggressive US intentions.

Maj. John Shaw, head of Space Force’s Space Operations Command, walked that tightrope during a panel discussion on allied milspace activities yesterday by stressing the need for the US to focus in the near-term on ensuring resiliency of current space systems to resist and deter attacks.

(Space policy wonks would point out that resiliency was the centerpiece of the Obama administration’s military space policy; whereas President Donal Trump has been, well, trumpeting the need for America to “dominate” space. And the new Spacepower Capstone Doctrine document does little to elucidate which one of those fundamentally different approaches the US military should prioritize — but that complex story is for another time.)

“The biggest challenge we have right now is protecting and defending capabilities that were built for a benign domain. And so the focus has to be on making those more resilient, so they are there for the warfighter and they are not an easy target,” Shaw told the Secure World Foundation (SWF) Summit for Space Sustainability this morning.

Shaw, who also serves as head of the Combined Force Space Component Command at Space Command, likened current US satellites to “supertankers and mega-container ships on the high seas.” These platforms and their support systems were “built for efficiency,” he explains, rather than to withstand torpedo attacks.

It’s not only the satellites themselves that need better resiliency, he stressed, but also the entire US space architecture from ground to orbit that has to be revamped to make it less tempting to adversaries seeking to exploit vulnerabilities in any future conflicts.

“How do we take what is currently an architecture that is not very resilient, that is seen as vulnerable, and now protect it, deter  attacks against it, to make it more resilient? … That is our most near-term challenge that we’re working on.”

To be sure, Shaw reiterated the Trump administration’s mantra that the new US military space organizations are needed because Russia and China have moved first to threaten US space assets and weaponize space.

But at the same time, in focusing on resilience, Shaw appeared to be putting down a marker designed to assuage concerns that creation of Space Force and Space Command could spur conflict by focusing on offensive space power.

Indeed, the US contention that Russia and China are ‘at fault’ in creating a military space race is a subject of some debate, given that from a technological viewpoint both countries have until recently lagged behind US military space capabilities. The same can be said for the repeated DoD assertions that up to now space was a wholly “benign” domain. (We are old enough to remember the uproar in 2001 over the warnings by Donald Rumsfeld’s Space Commission about a “Space Pearl Harbor.” )

The military officers from France, Canada and Japan on the SWF panel agreed with Shaw that threats from Russia and China are growing, and asserted that those threats are the drivers of their own pursuit of new military space capabilities. But they also were united in asserting that their own military build-ups (and their efforts to cooperate with the United States) should in no way be seen as aggressive or offense-focused.

“I would say that it’s not the fact, in itself, that we have Space Forces or Space Commands which is concerning. It is what you do with this,” said Maj. Gen. Michel Friedling, the first commander of France’s new Space Command, created in September 2019.

“It’s not the fact of having some space objects in space, or ready to go in space, which is concerning. It is what you do with it, what you show as intents, or, you know, what you wanted to show with this,” he elaborated. “And so this is actually what is concerning about some actors in space. And this is the reason why we have to be ready. Nobody has interest in any conflict in space. But we have to be ready.”

As Breaking D readers may recall, French President Emmanuel Macron approved the creation of the new command on July13, 2019, and Defence Minister Florence Parly announced a new military space strategy the following week that included the pursuit of lasers to ‘dazzle’ hostile satellites.

While France has shown much more willingness than many European countries to accept a need for offensive space capabilities, Friedling asserted that space situational awareness (SSA) — what the US military now calls space domain awareness — is the new French Space Command’s first priority. This includes beefing up joint efforts with Germany, Italy and others to develop new capabilities, he said.

“It’s an issue for us, transparency. I think we all need transparency in space,” he said. In France’s space strategy, he explained, “We say exactly what we’re going to do … . And this is not the case of many other actors in space.”

“[Our] mission is just for acquiring the awareness, space situational awareness, because of the importance of space assets for national security but also the economy, for people’s daily life,” he said.

Brig. Gen. Mike Adamson, director general for space at Canada’s Department of National Defence, said the increased important of satellites to the economy and civil well-being has been a key driver for Canada in shaping its space operations. This is reflected, he said, in Ottawa’s emphasis on SSA capabilities and sharing information with allied nations.

“I’ll use Earth observation for an example. There’s obviously a military application to that. But as we see increased incidences of natural disasters, fires, floods, ice storms and those kinds of things, you know, protecting those assets and protecting those capabilities, and ensuring that we have the ability to provide that service to the Canadian public or to our allies as well, is critically important,” he said. “So there becomes this sort of blurring of the lines, perhaps, between military capability and civi/ commercial capability when you’ve got these platforms. And it is inherent upon the government to make sure that you can protect [commercial/civil] assets and their interests.” (Theresa Hitchens).

The Army’s Next Generation Combat Vehicles