Acasă Armata Instead of the Joint AI Center building everything in-house, the JAIC is... 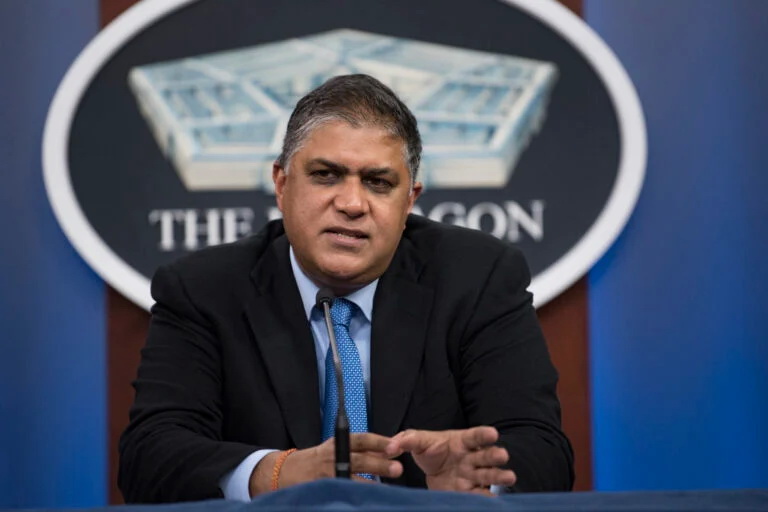 WASHINGTON: The Pentagon’s Joint Artificial Intelligence Center will issue a solicitation before November for a prototype contracting portal, called Tradewind, that JAIC hopes will revolutionize how the rest of the Defense Department does AI.

Despite its name, the JAIC doesn’t want to be the central factory that builds all AIs for the Defense Department. Instead, acting director Nand Mulchandani says, JAIC wants to build a one-stop-shop where everyone in DoD can find technical tools, cleaned-up datasets and contracting vehicles to do their own AI projects.

“Instead of a single [central] place where AI happens, everyone can and should both learn about AI but also start their own projects to implement AI in what they do,” Mulchandani said at a Pentagon press conference yesterday.

Take data, the raw material required to train machine learning algorithms – raw material which must be processed, organized, and formatted before an AI can actually use it. JAIC will provide curated datasets that the rest of DoD can use to train and test its algorithms, but “there isn’t going to be a single gigantic Fort Knox of data,” Mulchandani said. “I keep talking about the AI victory garden, this concept that each individual project or service or program needs to curate its own little data garden.”

In this metaphor, JAIC becomes the garden shop for all those gardeners. Instead of each project having to find, buy, or build its own tools from scratch, “we do it once and then it becomes reusable IP or products that everyone can use,” Mulchandani said, “products like Tradewind, Data MAC [Multiple Award Contract], T&E [Testing & Evaluation] MAC.”

Mulchandani and his staff outlined those pieces of this new approach in yesterday’s press conference, in briefings at JAIC’s first-ever public conference this week, and in emails to Breaking Defense.

The JCF is a common “development environment” organizations from across the Defense Department can use to build and test their own AIs. That environment will include easy access to curated datasets and a host of software tools – open source, commercial, and DoD-unique – all reachable through cloud computing.

But which cloud? Mulchandani is agnostic. He wants JCF to run on the (much delayed) JEDI cloud being built by the Defense Department CIO, he said, but he also wants it available via the Air Force’s CloudOne and other clouds across the DoD.

An “early access” prototype of JCF already up and running is being used by JAIC itself for a range of AI projects. Deloitte just won an $106 million contract to build up the JFC, but it will work with a host of other companies that can contribute useful tools.

While the JCF will be the big technological toolkit for AI developers, Tradewind – which refers both to the online portal and the whole approach — will provide the contracting toolkit.

Traditional Defense Department processes are too slow and rigid to capture the speed, innovation, and rapid upgrade cycles required by modern AI. So the JAIC wants to offer a range of contracting vehicles – some using the Federal Acquisition Regulation (FAR) process, some using other authorities Congress has created – for DoD developers to pick and choose from. The goal is for each project to go from a formal Request For Proposals to a contract award in 30 to 90 days, which is slow for the tech sector but lightning fast for the Pentagon.

DoD is also notoriously opaque, with many contractors – especially those not from the traditional defense sector – struggling to figure out what the department actually wants and whether their particular proposal has a shot. So the JAIC wants to create an online hub where both industry and academia can come together with potential DoD customers to freely exchange information. That will include an easy way for companies to look up the status of contracts and other information, Mulchandani said, “so they don’t have to pick up the phone or track down somebody” every time they need an update.

Tradewind – both the portal and the process – are still very much a work in progress. “We are still getting feedback from industry on ways in which this can be done,” Will Roberts, JAIC’s acquisition chief, said in an online briefing Tuesday. “In the next couple of months …September-October… we’ll have enough information to release a solicitation [for] a prototype.”

JAIC plans to offer at least three Multiple Award Contract vehicles through Tradewind once it’s up and running:

Data MAC will allow DoD organizations to quickly hire contractors to clean up their data and prepare it for AI. While vehicles like GSA schedules already offer streamlined access to general IT products and services, there’s no one-stop-shop to get the highly specialized and rapidly evolving services required to get your data “AI-ready,” said JAIC’s chief of data science, Marcus Comiter.

That means each AI project has to figure out on its own just how to get its data processed, labeled, and sorted, hunting down potential vendors and generally reinventing the wheel. But with DATA Mac, Comiter said, DoD organizations will have easy access to “many specialized AI vendors who at the bleeding edge of technology, providing capabilities that are not currently on existing contracts and supply schedules.”

T&E MAC will provide similar access to testing and evaluation services for AI. Old-school IF-THEN code is deterministic, with only one possible output for any given input – although it still takes testing to discover unintended outputs, i.e. bugs. Machine learning algorithms, by contrast, use such complexly multi-layered math that even their own designers often can’t predict what output will come from any given input – which makes rigorous testing all the more important to catch errors.

“We recently put out an RFI [Request For Information on] test and evaluation; we got responses from over 70 industry and academic partners, vendors that would like to work with us,” said Jane Pinelis, JAIC’s T&E chief. “We would like to make it as easy as possible for them to work with us” – which is where T&E MAC comes in, she said: “It will help us quickly and efficiently compete test and evaluation contracts.”

Both Data MAC and T&E MAC will use the standard Federal Acquisition Regulation (FAR) process, which is far more familiar and comfortable for most DoD organizations and which can move quickly if everything is set up right, Roberts said. But, he said, FAR isn’t flexible enough for the third Multiple Award Contract planned, which will provide for the services and products required to develop the actual AI.

In essence, Data MAC helps you get your data ready before you develop the AI; the AI MAC helps you develop it; and T&E MAC helps you test it once you’ve started developing it. But a successful AI project runs through this prep-build-test cycle over and over again, both to get a working system deployed and to keep it up to date as new techniques and data become available.

Overall, costs of major DoD acquisition programs have grown by 54 percent over their lifetimes...

Sri Lanka reported 24 new infections on Monday, its most in a single day. It...

For the first time in seven years, the US and Russia will formally meet to...