Acasă Actualitate Industry and Congress were deeply skeptical of the Army’s suggestion to enter... 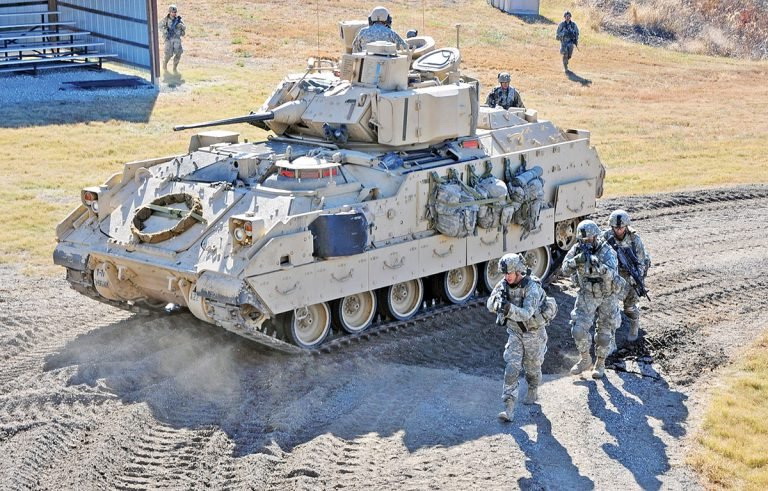 WASHINGTON: The defense industry, Congress, and thinktanks breathed a unanimous sigh of relief at the Army’s latest announcement on the Optionally Manned Fighting Vehicle program. In an email to reporters Thursday afternoon, the Army said it would no longer seek to enter its own design team in the OMFV competition, a controversial plan it had suggested in a draft Request For Proposals in July.

“The whole purpose of publishing a Draft RFP was to elicit feedback from our industry partners. We take their feedback seriously,” the Army’s armored vehicle modernization director, Brig. Gen. Richard Ross Coffman, told me. “We won’t always agree — and must act in the best interest of our soldiers — but we will always listen.”

Thursday’s announcement is the latest twist in the decades-long struggle to replace the Reagan-era M2 Bradley, a heavily armed and armored troop carrier. It also suggests the notoriously bureaucratic and inward-looking Army acquisition system is finally starting to take defense contractors seriously when they say something is a bad idea.

“The only surprising thing here is that the Army may have actually taken into account and listened to the over 500 industry comments received,” said Bill Greenwalt of thinktank AEI, a former Hill staffer who spent years reforming military procurement. “I expect they got an earful.”

While the Army’s announcement Thursday said it was still “carefully reviewing and analyzing industry comments (over 500 in total) [for] the next few weeks,” the message from industry on the government team seems to have been so strong the service didn’t want to wait any longer to take action.

“There is nothing wrong with the government conducting a make-or-buy decision and deciding it should build something on its own, but that decision should occur before you ask industry to commit significant time and money to a bid,” Greenwalt said. “The government’s plan to actually be one of the bidders on this contract raised a plethora of conflict of interest, protection of intellectual property, and favoritism issues that I suspect just could not be mitigated.”

“I expect there were some in industry that made a decision to not to bid if the government remained a competitor,” he said. “That could be what swayed the Army in the end.”

(That’s a rumor we have heard as well, though we can’t confirm it).

Andrew Hunter, a former defense acquisition official now at CSIS, agreed the Army made the right call in backing off. “This is a realistic assessment of the government’s capacity to both manage a competition for OMFV and to build a team that can simultaneously compete to build the design,” he told me. Doing either would be hard enough, he said: “Trying to do both simultaneously was very ambitious.”

“It takes a high level of capability for the government to serve as the design lead for a complex system,” Hunter said. “In a few areas… this approach can work, [but] the government may bite off more than it can chew.”

Unlike the thinktankers, our sources from Capitol Hill and industry asked to remain off the record. But we can say they all approved of the Army’s decision not to enter its own design team.

After cancelling two previous programs meant to replace the Bradley – the Future Combat Systems in 2009 and the Ground Combat Vehicle in 2014 – the Army overhauled its troubled acquisition system in 2018 and launched what became the Optionally Manned Fighting Vehicle program. The service’s initial plan for OMFV required companies to build a working prototype at their own expense, but only one competitor, General Dynamics, delivered a vehicle by the deadline, and it didn’t meet the service’s stringent performance requirements. So the service cancelled its initial solicitation, humbly asked industry for advice, and rebooted the program with more realistic requirements and schedule.

Five Crucial Details You Must Know.

The Air Force is “driving toward” 2023 for initial operating capability for Skyborg, says...

Dozens of generals — and one admiral — converge on Nellis Air Force Base next...