Acasă Armata The new ships will come from the Navy budget, and “the Marines... 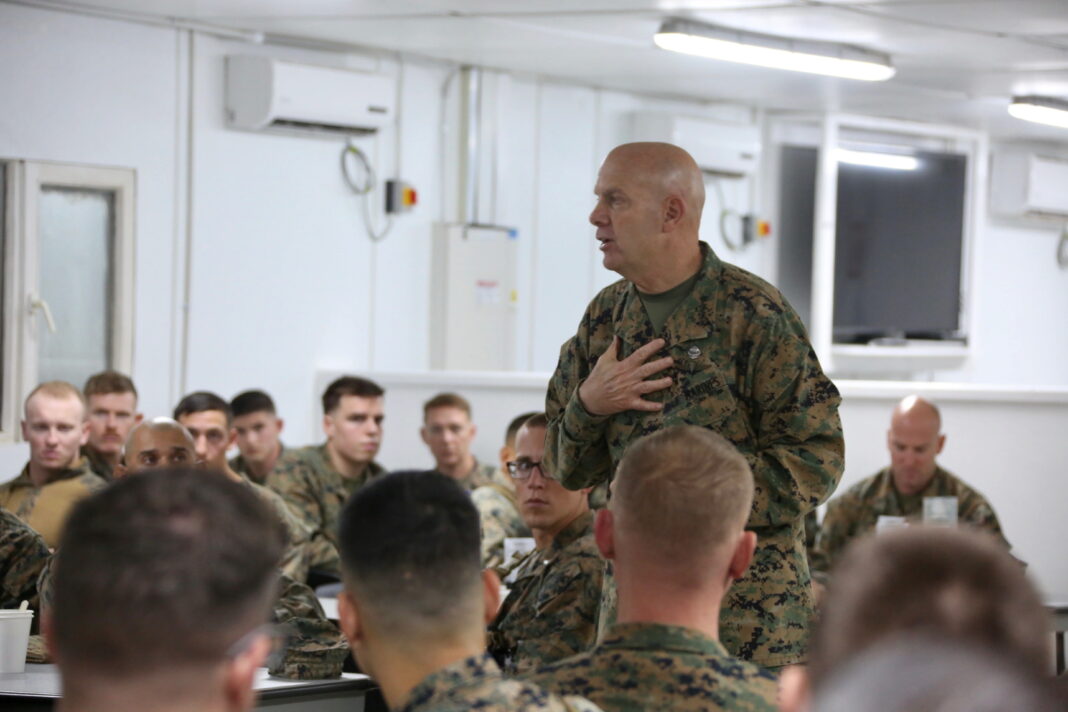 WASHINGTON: The nation’s top Marine today said the Pentagon’s eagerly-awaited review of the Navy shipbuilding plan includes ships the Corps has wanted to add to the fleet.

“The end result” of the work since February is that “new classes of ships that the Marine Corps must have, they’re in the plan. Same with logistic ships,” Commandant Gen. David Berger revealed at an annual Marine conference.

Berger said the Corps had a seat at the table today that “for the first time” alongside the Navy in hashing out the needs of the two services. “We’ve never been involved in that process in the past,” he added. Normally, the Corps would suggest what it needed in the realm of amphibious ships and hope the Navy listened. “This year, from day one, we were involved together.”

The new ships the Corps wants — which the Navy Department will have to pay for — include a Light Amphibious Warship and a Medium Logistics Ship that will transport and support small, dispersed groups of Marines working on ad hoc bases far afield from the fleet.

Both would represent an entirely new class of manned ship designed to operate in a crowded environment while supplying ships at sea and troops on land.

The months-long saga of the Navy’s missing 30-year shipbuilding plan and new force structure assessment, both of which were expected in February with the 2021 budget, has cast a pall over the service and angered members of Congress who want a plan they can fund.

Esper’s takeover of the planning led to clashes with lawmakers who demanded documents before moving out on funding any new Navy projects, but Esper insisted he found the original plans insufficient to meet the push to build a fleet of 355-plus ships.

The secretary was briefed on revised plans last week, with some sort of public rollout expected later this month.

While early indications suggest that the ships will be vastly cheaper than the big deck amphibious ships the Navy and Marines use today, the ships will still have to fight for space within a budget expected to be flat in the coming years.

Last week, Esper was ready to announce a bigger Navy shipbuilding budget during a speech in California, but deleted a call for the account to grow from 11% to 13% of the service’s budget at the last minute. A DoD spokesman said that the growth target is “predecisional” and was struck before the speech.

As his planned remarks suggested, the armed forces will likely have to find the money for their modernization projects within their own existing budgets.

Berger has acknowledged that reality in the past, and this morning reiterated, “the Marines are not asking for a nickel more,” from Congress. “We’re not going to get any more money.”

The Corps is already divesting of its Abrams tanks, bridge-building equipment and units, and several helicopter squadrons in order to make room in its budget for things like new unmanned systems, precision rocket and artillery weapons, and the needs of nascent Littoral Regiments capable of working in austere locations with their own dedicated logistics and air defense capabilities.

The new regiments and the need to operate close to potential adversaries doesn’t mean, Berger said, that the Corps has plans to go back to storming beaches. In the network-centric way of war being developed by Pentagon leaders, “we’re not gonna do it in a head-on-head, slaughter across the beach approach,” he said.

In places like small island chains in the Pacific, or in the Baltics, the idea is “not to fight our way in, our approach is to live there every day,” Berger said.

That will require small, highly mobile groups of Marines to permanently operate within range of Chinese, Russian, and Iranian weapons, but with the ability to protect themselves while calling on nearby American assets.

The new Littoral Regiments, for example, won’t be fully fleshed out for several years, but the Corps is wargaming “what assets would we be able to place in that battle space that are very low signature and that give us the firepower that we need to be a relevant force that provides consequences, should we get past the deterrence phase,”  Maj. Gen. Kevin Iiams, assistant deputy commandant of Combat Development, told reporters Tuesday that the virtual Modern Day Marine conference. (A.R.).

In tense exchange with Trump, Macron stands by his ‘very, very nasty’ comments about NATO