INCISIV National
Acasă Armata The technologies that allowed a tracked howitzer to shoot down a cruise... 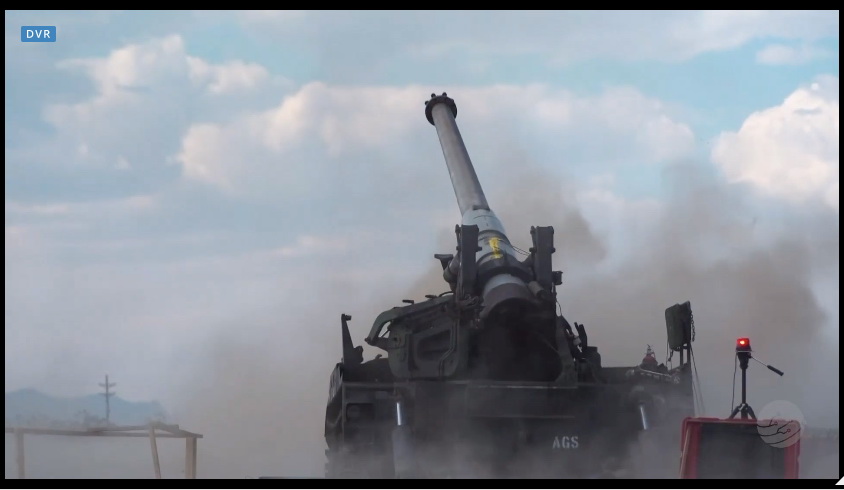 Using an AI-enabled C2 network and a new hypervelocity projectile, a howitzer killed a surrogate cruise missile in the second ABMS on-ramp in Sept. 3, 2020.

“There are 10 capabilities we are ready to leave behind” at North American Defense Command, Northern Command and Space Command, Roper told reporters today, “and we are actually discussing with them now: What do you want and how do we do it?”

“And the how is just as important as the what,” he added. This is because, to bring in one of the ABMS tools — such as the fuseONE application to fuse multi-domain intelligence, or the commandONE battle management/machine-to-machine command and control app — they have to “give up” their current system, he explained.

“That’s a very difficult choice, especially If they have to bank their mission on it. So, where are we are with NORAD, NORTHCOM and SPACECOM is asking them to convert a portion of their ops floor, or operators, to the system we’ve developed so it can be used alongside their current one,” Roper explained.

While Roper did not specify which ABMS tools are being eyed for this rapid transition, it isn’t too hard to guess some of them are based on the reactions of some of the four-star Combatant Commanders who attended the second ABMS ‘on-ramp’ demo Sept. 3.

Gen. Glen VanHerck, who heads NORTHCOM — which led development of the On Ramp scenario — enthused in a post-demo briefing with reporters about the leap-ahead capability to share all-domain awareness data in near real-time that was able to generate a common operational picture (COP) for the various commanders at different sites, including Andrews AFB in Maryland and Nellis AFB in Nevada.

There are several tools and apps that work together to provide that shared COP, which allows real-time collaborative decision-making by military leaders. One baseline ABMS product is the centralized cloudONE network, which both VanHerck and Roper agreed during the post-demo briefing is ready for initial fielding.

CloudONE enables the fuseONE app, which in turn enables the omniaONE app that creates the COP. (Roper explained that during the second On Ramp, five different vendors displayed competing versions omniaONE.)

CommandONE also uses the combat cloud, and was critical to the big bang (literally) of the second ABMS on-ramp: the shoot down of a surrogate cruise missiles, played by BQM-167 target drones flying over White Sands Missile Range in New Mexico, a novel hypervelocity projectile.The small projectile, which can fly at Mach 5, was developed by the Navy and the Army, he said, and was launched from an Army M109 Paladin.

That shoot-down further was empowered by the AI algorithms embedded in omniaONE and commandONE, Roper said, in a manner that was revolutionary.

“I’ve been waiting for the department’s equivalent of a Sputnik or Alpha-Go moment where AI did something that could not have been done otherwise,” Roper said, and it did by greatly increasing “the speed at which kill chain was executed to shoot down a cruise missile — flying low, pops up, coming into a base — there’s no time to make the decision, especially if there’s more than one.

“That’s an example of us demonstrating something that could not be done the human-to-human way.  Machine-to-machine, it’s easy; human-to-human, impossible,” he stressed. “I think that the lesson learned from that is going to be long lasting, and I would not be surprised if September 3, 2020 is marked as the birth of the Internet of Military Things, a very nascent first-step birth, but one that can grow into something much bigger.”

Indeed, the new head of Air Combat Command (ACC), Gen. Mark Kelly,said  last week at the annual Air Force Association meeting he’d love to get his hands on AI systems to better utilize the reams of sensor data the Air Force is collecting and to speed targeting decisions as soon as possible.

But while some of the capabilities are ready, Roper cautioned, getting them into the hands of operators will continue to be a challenge because current requirements processes are designed for development programs that stretch over decades. ABMS, with its four-month upgrade cycle, and its focus on creating not a single platform or weapon or even a single software package doesn’t fit will with today’s approach to assessing value based on “numerical” determinants such as cost, schedule and performance. (Indeed, the ABMS program’s inability to produce things like end-state performance parameters has raised critical eyebrows at the watchdog GAO.)

Thus, Roper said he is advising Vice Chairman of the Joint Chiefs of Staff Gen. John Hyten in his effort to revamp how the Joint Requirements Oversight Council (JROC) does business and makes decisions.

“I and others are advising him now on how he can retool the JROC process to go after more architecture-level and digital-type technologies that just simply don’t make sense in the cost/schedule/performance world in which requirements and acquisition operate,” he said. (Theresa Hitchens).

The militarized Microsoft HoloLens headset was designed to spot targets day and night on future...