Acasă Actualitate US discovery and exploitation of rare earth minerals from the Moon and... 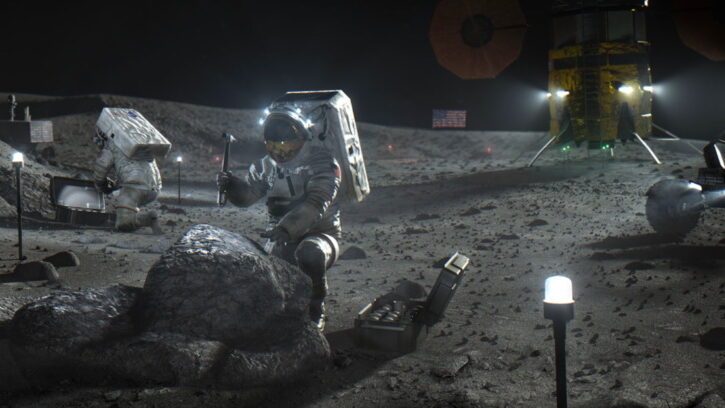 UPDATED: To include Gen. Raymond’s explanation of the Space Command/Space Force mission in cislunar space. WASHINGTON: NASA and the Space Force inked an MOU on space cooperation today that more firmly pins the US military to future missions in the vast region of space beyond Earth’s orbit including, at least indirectly, the Trump administration’s neo-gold rush for space resources.

The agreement “expands” long-standing NASA-DoD/Air Force space cooperation on space exploration, including on situational awareness, communications and precision navigation. On top of that it includes efforts to establish “norms of behavior” for activities such as Moon and asteroid mining, Chief of Space Operations Gen. Jay Raymond said today.

“If you look at R&D, and technology roadmaps, and S&T, and partnerships, and the need to understand what’s going on the domain, the need for norms of behavior to keep the domain safe for all — there is so much there that’s ripe for collaboration, that would be a benefit for both organizations. And that’s really what this MoU is focused on,” Raymond told told the Mitchell Institute today.

“I think this is a unique time in American history where we can go sustainably to the Moon. I will tell you that, given the challenges that exist in space, it is necessary to have security. And that’s why it is so important for NASA to to work side by side with with the Space Force,” NASA Administrator Jim Bridenstine said during the joint webinar to announce the MoU.

Raymond explained that given Space Command’s area of responsibility, which extends from 100 kilometers above the Earth to, in theory, infinity (and beyond!), the Space Force is seeking to organize, train and equip personnel for operations beyond Geosynchronous Orbit (some 36,000 kilometers in altitude). While the Air Force traditionally has maintained a strong working partnership with NASA, Raymond said the “expanded” Space Force mission and NASA’s re-invigorated push into cislunar space and beyond provides an opportunity for “expansion” of that partnership.

UPDATE BEGINS. “Today, economic and military space activities do not extend farther than our highest-orbiting satellites. However, commercial investments and new technologies have the potential to expand the reach of vital national space interests to cislunar and beyond in the near future. It is our responsibility to maintain US advantages in space. If and when that extends beyond the GEO belt, we will go beyond as needed,” Raymond explained in an email to me this evening.

“We are building the Space Force not for today or tomorrow, but for the next 100 years, so I can see operating in cislunar space, in close coordination with other organizations, a potential for us in the future. Toward that end, we will continue our partnership with NASA to share, learn, and experiment with technologies to leverage orbits beyond the GEO belt,” he added. UPDATE ENDS.

An example, he told the Mitchell audience, is space domain awareness. As I reported yesterday, Air Force Research Laboratory is working with the Space Force to design and test a small satellite orbiting near the Moon, called Cislunar Highway Patrol System (CHPS), to detect and tract objects nearby.

“We are working in close partnership with NASA to develop the domain awareness necessary to support their efforts, and also support our national security efforts going forward,” Raymond said, noting this includes keeping an eye on asteroids on trajectories that might impact with Earth.

“I am encouraged to see the mention of planetary defense as a shared concern and an area they might partner on,” Chris Johnson, space law advisor for Secure World Foundation, said. He cautioned, however, that the MoU is only an umbrella agreement and doesn’t “create any specific activities or joint undertakings.”

However, Johnson told me in an email today, given that the two “will be sharing the same domain out to cislunar space, it makes logical sense that they should be operating in a cooperative and even a coordinated fashion.”

Raymond also stressed that Space Force and NASA had similar needs for space operations, despite their different mission sets. “We rely on similar things,” he said, “you’ve gotta be able to communicate, you have to understand what’s going on in the domain around you, you have to be able to navigate.”

NASA’s Artemis program (named after the Greek god Apollo’s twin sister, who somewhat intriguingly is not the goddess of the Moon but of wild animals and the hunt) seeks to put US astronauts back on the Moon by 2024. But the Artemis effort is also different than the historic Apollo program. It is aimed at establishing a permanent US presence on and around the Moon — and eventually Mars — as part of the overarching Trump administration goal of opening space for future commerce, including resource extraction.

Bridenstine explained that NASA’s immediate interest is in water ice that could be used only to sustain human activities on the Moon, but also to make rocket fuel that would allow easier access to Mars and farther flung reaches of the solar system. And in the longer term, NASA is hoping to strike gold (almost literally) by finding and extracting rare earth minerals on the Moon and asteroids.

Rare earths are a group of 17 chemical elements used for many military applications from missile guidance to lasers, but also are key to the advanced computing and telecommunications industries. China controls much of the world’s rare earth production, which has led DoD and the White House to seek ways to turn the tables.

Bridenstine on Sept. 10 announced in a tweet that NASA is launching a program to buy lunar regolith (i.e. Moon rocks) in hopes of sparking a commercial space mining boom. “We’re interested in buying some lunar soil commercially,” Bridenstine told Secure World Foundation’s Space Sustainability Summit the same day. “We want a commercial company to go to the moon, extract some lunar soil, and then … NASA can take possession of it.”

While he explained that this is a small program, he said that NASA “doing it really to demonstrate that it can be done, that the resources extracted from the moon are in fact owned by the people who invest their sweat, and their treasure, and their equity into that effort.”

Bridenstine told Mitchell Institute today that the initiative bounces off of the 2015 Commercial Space Launch Competitiveness Act signed by President Barak Obama. That law codifies the US assertion that extraterrestrial resource extraction by private companies does not violate the 1967 Outer Space Treaty (OST), which prohibits claims of national sovereignty in space.

NASA also is attempting to convince other nations to go along with its interpretation of international law via its “Artemis Accords” initiative announced in May. The accords seek to define norms and rules of behavior for space exploration and exploitation. Countries that want to partner with NASA in its Moon-Mars exploration projects will be required to sign the bilateral agreement, according to NASA’s website.

Senior Trump administration space officials also see the accords as a way for the US to shape the future space environment in its image. Trump in April signed the “Executive Order on Encouraging International Support for the Recovery and Use of Space Resources,” which argues that US policy is in line with the OST.

It also forcefully rejects any treaty to codify resource extraction rules along the lines of the 1979 Moon Treaty, which characterizes space as a global commons where resources must be equitably shared. This is consistent with the administration’s long-standing reluctance to empower international bodies, such as the Committee on the Peaceful Uses of Outer Space (COPUOS), to set legally binding rules for space. (Somewhat ironically, the issue of space resource extraction is one area where Washington and Beijing — which has faced pushback, including violence, on its mining operations in Africa — currently appear to be on the same page.)

Bridenstine re-asserted the US position that space resource extraction is a “limited property right” akin to fishing or oil drilling in the high seas. (Although it might be pointed out that the US has not formally ratified the 1982 UN Convention on the Law of the Sea regulating such activities, to which 167 of the world’s 193 countries are party.)

Further, he argued, because the OST is “pretty vague” on this and other issues: “If we don’t define it, somebody else will. And their interest might not align with ours.”

The US position on space resources and norms of behavior is not universally agreed, with even some allies raising skeptical eyebrows. Many developing countries and emerging space players with histories of colonization and foreign exploitation of their natural resources are, understandably, wary of what they see as potential ‘land grabbing’ by the US and other wealthy space actors. Indeed, as NASA and the State Department negotiate the Artemis Accords, it is not surprising that they face some international squeamishness caused by the growing prospect of US boots near the Moon —  if not exactly on the Moon, as spoofed in the Netflix comedy “Space Force.”

“The only thing that I am concerned with is the actual extension of Space Force domains to the Moon (the MOU states “272,000 miles and beyond”, which is actually farther than the Moon),” Johnson said. “This is because it is a longstanding agreement that the Moon shall be used exclusively for peaceful purposes, and national militaries are absolutely not permitted on the Moon (with only extremely limited exceptions), as was agreed upon by the United States in Article IV, paragraph 2, of the Outer Space Treaty.” (D.N.).