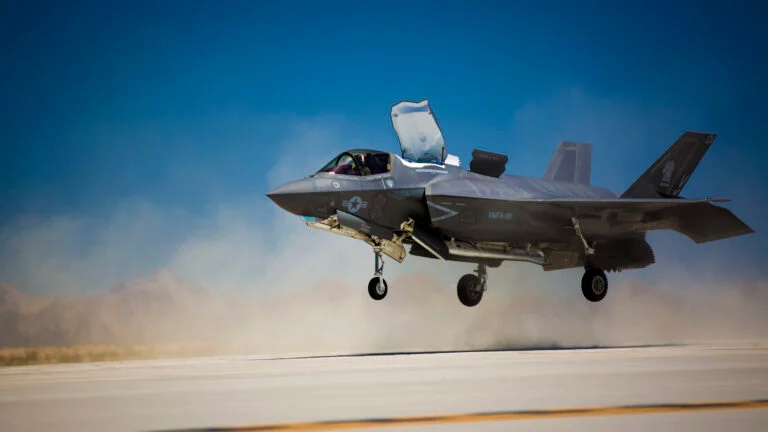 WASHINGTON: The Army revealed yesterday that Marine Corps F-35 Joint Strike Fighters flew in its future warfare experiments in the Yuma Desert, sending and receiving target data to and from Army units on the ground.

The stealth jets’ participation in the high-tech Project Convergence wargames came as a surprise even to reporters who’ve been covering the exercise closely. (McCarthy’s remarks were also the first we’ve heard an Army official name the specific spy-satellite agencies involved, though their identity was easy to deduce). This first-ever Project Convergence was primarily about connecting different elements within the Army, and the service had said to expect major participation by the other services only next fall.

But the Marine Corps-Army collaboration this year at Yuma certainly fits with the two services’ growing focus on the Pacific. The Marines bought the jump-jet variant of the F-35, the F-35B, in large part to operate off short airstrips on small islands, and this week they announced plans to create three specialized “littoral regiments” based in the Pacific for island warfare. Earlier this month, the Army deployed HIMARS missile launchers to Palau and the Aleutian Islands as part of the Pacific Defender exercises. Both the Army and Marines are working on new missiles to let HIMARS to strike enemy ships at sea, and the Army’s top modernization priority is a family of longer-range weapons, including hypersonics, to strike targets once reachable only by airstrike.

The goal is to dramatically expand the speed and reach of military operations, said the Army Chief of Staff, Gen. James McConville, who’ll hold staff talks with the Air Force next week. “What you’re going to see is really the depth of the battlefield [expanding],” McConville said. “It will be a joint forces fight, it will be a coalition fight, because we start talking hundreds and thousands of miles.”

Now, the US armed services and their coalition partners got plenty of practice working together in Afghanistan and Iraq, especially with airstrikes in close support of troops on the ground. But coordination remains cumbersome and error-prone, relying on ground observers talking to pilots over radio and manually typing in target coordinates.

Experiments in what’s called Joint All Domain Command & Control, like the Army’s Project Convergence and the Air Force’s ABMS “on-ramps,” aim to automate that process by transmitting data directly from machine to machine. The vision is that spy-satellite photos and other reconnaissance information flow into artificial intelligence software, which spots concealed foes far faster than human analysts can, picks priority targets and sends precise targeting data to whatever friendly unit is best armed and located to strike, be it an aircraft, ground-based missile launcher, or other weapon.

Getting all these systems to work together over such distances is hard enough within a single service like the Army. Getting different systems’ technology to trade data is harder still. That’s true even for an aircraft like the F-35, which is so packed with advanced electronics and data-fusion software that the former Air Force chief of staff, Gen. David Goldfein, called it “a computer that happens to fly.”

So what specifically happened at Yuma between the Army and the Marines? The Project Convergence exercise director, Brig. Gen. Richard Ross Coffman (who also oversees armored vehicle development), provided a few more details.

The Army’s Yuma Proving Ground, where the exercise is taking place, is “right across the highway” from Marine Corps Air Station Yuma, which has “many, many F-35s,” Coffman noted. “Due to the incredible relationships that were developed,” he said, “the Marines provided F-35 time.

Note the use of the Pentagon jargon “affect.” “Effects” normally means bombs and bullets on target, but it also includes everything from press releases to hacking and jamming – and the F-35 has publicly acknowledged but highly classified capabilities to conduct cyber and electronic warfare.

Overall, Coffman said, the Army’s AI algorithms were able to spot targets and transmit precision targeting data — not just to the Marine F-35s but to Army drones and artillery pieces – “over 350 times in six weeks.” That’s more than any previous exercise he’s aware of.

That said, the AI is still young and “brittle,” Coffman cautioned. Its machine-learning algorithms need to be trained on much more data before they can reliably detect a wide range of targets in a wide range of environments, not just the open desert.

Likewise, existing Army networks aren’t designed to transmit this much data over such long distances. Ones and zeros had to traverse, not just Yuma Proving Ground’s 2,000 square miles of restricted airspace, but between Yuma and a simulated theater HQ 1,300 miles north at Joint Base Lewis-McChord, Wash., and then 22,000 miles straight up to the satellites in geostationary orbit and back down.

For Project Convergence, the Army used parts of a forthcoming network upgrade still being finalized for roll-out next year, called Capability Set 21. Then, because CS21 is optimized to network an individual infantry brigade, not for far-flung forces across land, air, and space, the Army augmented it with a host of other technologies, many of them still experimental projects from Science & Technology labs.

“The vast majority of the things that were out here … are S&T projects,” said Gen. John “Mike” Murray, head of Army Futures Command and Coffman’s boss. “We were able to drag them out of the lab, along with the scientists who’ve been out here in the dirt as well for six weeks, and put them to an operational test.”

“It was very complex and took us weeks of hard coding,” Coffman said. “What was really, really powerful was when we identified something that wasn’t working …we had the computer expertise on station to recode the algorithms … to make it better on the spot.”

Even then, a lot of things still didn’t work well enough to use in the exercise, Murray admitted bluntly. “We started with a lot more technology six weeks ago than what we demonstrated today,” he said. There was a “very deliberate process” of testing tech in the heat, dust, and distance of the Yuma Desert to winnow out what was ready and what wasn’t.

“The reason why we came here is because the harsh conditions,” Coffman said. “We knew that if we could accomplish our mission here, we could do it almost anywhere on Earth.” A lot of equipment fresh out of the lab proved promising but will take refinement and ruggedization to function reliably in field conditions, he said.

The Army is already working on potential technologies to add for the 2021 exercise, and Coffman said his goal is to start testing tech much earlier than was possible this year. When Project Convergence 2021 begins next fall, he said, “I’d like to show up on day one and have it work.”

But the Army’s notoriously slow-moving acquisition system will never catch up with modern technology if it can’t tolerate the possibility of failure, Murray made clear. Sometimes, “it’s okay to fail,” he said. “Part of the culture is willingness to take some risk.”

“Eight months ago, this was a PowerPoint slide,” Murray said. “I certainly didn’t know how this was going to go. [But] let’s get input from soldiers, let’s put the engineers in the dirt, let’s fix stuff as we go… We’ve matured technologies in six weeks it would have taken us two to three years to mature in the lab.” (A./R.).

Congress worried that the SCO’s ability to act fast would be stymied by layers of...