Acasă Armata Headlines have celebrated the carrier’s new F-35s — but the Navy also... 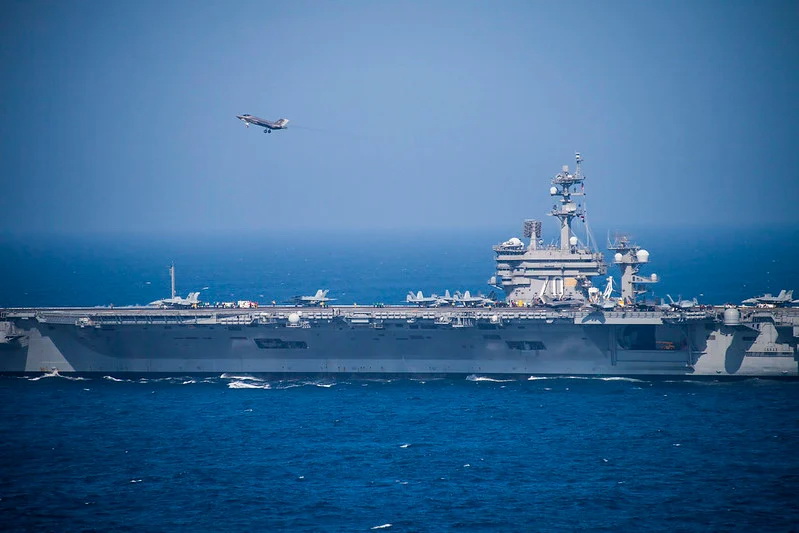 An F-35C takes off from the USS Carl Vinson.

Earlier this month, the USS Carl Vinson broke new ground by becoming the first refitted aircraft carrier to fly F-35s as part of its normal flight operations. If current plans hold, it is likely to become the first to fly the Navy’s experimental refueling drone in a. few years as well.

The 36-year old Vinson just wrapped up a major refit to accommodate the specialized needs of the F-35, and is practicing launches and recoveries now off the California coast. While the F-35 work garnered most of the headlines, critical work was also performed to prepare the ship to operate the MQ-25 Stingray drone, a move that would add hundreds of miles of range to carrier air wings.

The ship will deploy with F-35s in 2021, marking the first deployment of F-35Cs. Marine F-35Bs have already deployed on amphibious ships USS Wasp, America, and Essex to the Middle East and Pacific over the past two years. But those vertical takeoff and landing aircraft have different requirement than the Navy’s more traditional launch and recovery aircraft, which are flying from the Vinson.

The Stingray would likely fit into these flight operations by acting as an extra sensing node in the sky, pushing data back and forth between crewed and autonomous surface vessels and giving the Navy and Marine Corps another intelligence gathering asset. As a tanker, it will also extend the range of the Navy’s carrier-based F/A-18 Super Hornet, EA-18G Growler, and F-35 fighters by hundreds of miles.

Some of the work on the Vinson involved establishing an Unmanned Aviation Warfare Center on the ship, along with new network infrastructure and command and control equipment.

Most of the focus on the Navy’s unmanned efforts have focused on its planned fleet of small, medium, and large unmanned surface vessels. In July, the service awarded L3 Technologies Inc. a $34.9 million contract for a prototype Medium Unmanned Surface Vessel as part of plans to build about 40 in coming years. Current plans call for the ships to have a displacement of roughly 500 tons. The medium ships are thought to skew more toward mission modules revolving around intelligence, surveillance and reconnaissance payloads and electronic warfare systems.

Earlier this month, the Navy awarded several shipbuilders contracts worth a cumulative $41 million to develop requirements and early designs for a new class of Large Unmanned Surface Vessels. The ship is envisioned as a critical part of a radically modernized fleet that will rely heavily on unmanned ships to scout ahead of manned vessels, conduct electronic jamming and deception, launch long-range missiles at targets found by other forces, and keep Chinese and Russian ships and submarines away from American carrier strike groups.

The Stingray made its first two-hour flight in September 2019, controlled by Boeing pilots on the ground. It is slated to begin a new round of flight tests this fall.

An $805 million contract awarded to Boeing in 2018 will cover design, development, fabrication, test and delivery of four Stingrays, leading up to what is expected to be a $13 billion program for 69 operational aircraft and several testing assets.

A June Government Accountability Office report warned that if the work wasn’t performed on the Vinson and the next carrier USS George H.W. Bush, the Navy might have to extend the drone’s development testing by up to three years, but Navy officials confirmed Friday that the first of two upgrades were made to the Vinson, and the program remains on track.

The Stingray is scheduled to achieve initial operational capability by 2024, followed by the integration of the drones into the Navy’s air wings. (R.A.).

Opponents of defense spending may cite the economic consequences of COVID-19 — huge deficits and...

The Army’s Got A Universal Robot Driver