Acasă Anchete In his first substantive public comments about the fleet since assuming the... 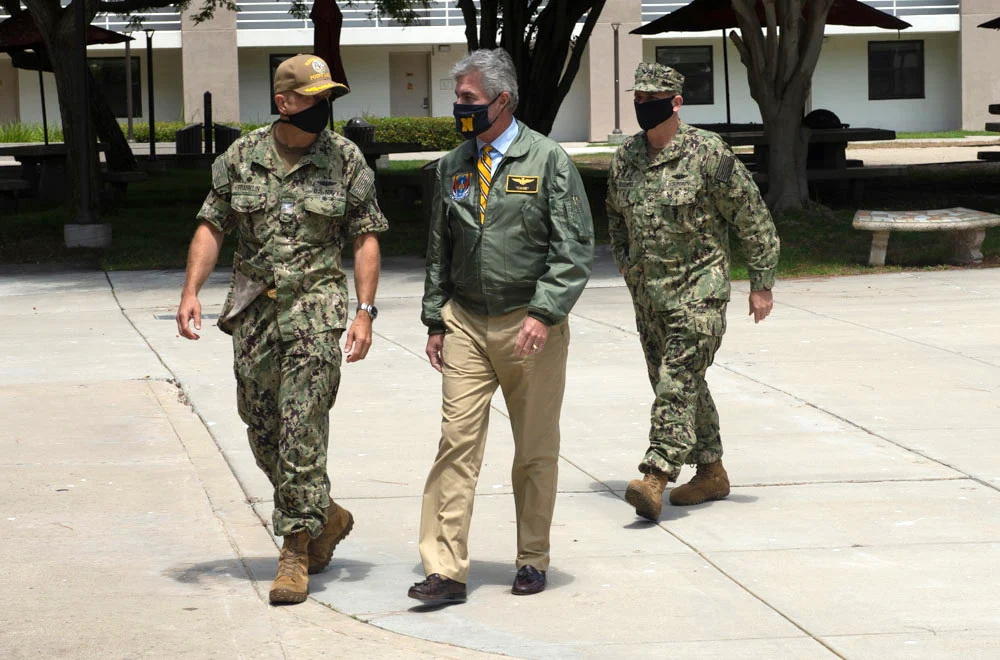 ABOARD THE FORMER USS CONSTELLATION: In the most substantive public comments he has made about changes proposed to the size and shape of America’s fleet, Navy Secretary Kenneth Braithwaite said Wednesday he’s prepared to shift billions from internal accounts to swell the shipbuilding budget.

“Everybody had to find savings. There was pretty much nobody who was let off the hook,” during his months-long internal dive into where to find money to grow the fleet by dozens of new ships, and potentially hundreds of new unmanned craft.

Braithwaite has said little publicly since his May 2020 swearing in, a low profile likely informed by the very public flameouts of his two predecessors, who were fired in November and April after getting crosswise with the White House on personnel issues, and storming ahead of Pentagon leadership on the response to a COVID outbreak aboard the USS Theodore Roosevelt.

Braithwaite spoke with me and another reporter on the deck of the decommissioned USS Constellation as a warm breeze snapped the flags above Fort McHenry in the background. He had just shot a video clip announcing the ship will be the namesake for the new class of frigates the service is building.

Using the 19th century sloop as a nod to history while pitching the substantial changes expected to be announced in coming weeks, Braithwaite sketched a vision of how the 500-plus ship fleet will be funded to meet the challenges of a rapidly growing Chinese fleet, while improving the often abysmal readiness rates for the current 300-ship fleet.

The secretary confirmed that he and Defense Secretary Mark Esper have come up with a plan to fund the new fleet though a mix of Navy funds and Pentagon money. Esper said earlier this week the Navy shipbuilding account would grow from the current 11% of the budget to 13%, a move that in 2021 would push the account to roughly $24 billion.

But Braithwaite said Esper promised even more help if he found a way to get to that 13%.

“My commitment to Dr. Esper was that, if I could get to 13% dedicated towards building ships, that he would then augment us and help us out…giving us additional [Pentagon] resources to be able to build ships,” Braithwaite said.

To boost the budget, “we looked across the entire spectrum of everything in the Navy. In fact, I just met with the chief of chaplains today, and everybody was affected to some degree by some of the reprogramming, the reorganization. There’s still more coming. You’re going to see some pretty significant announcements in the next few days.”

Both Esper and Braithwaite reached for historical references to make the case for the new fleet this week.

In comments at the CSBA earlier this week, Esper spoke about 19th century naval strategist Alfred Thayer Mahan, whose book “The Influence of Seapower Upon History” shaped how generations of naval analysts in the US and UK thought about naval power. Mahan’s vision revolved around how large fleets helped ensure healthy domestic economies and kept critical commercial sea lanes open.

Braithwaite was more specific, pointing to the Navy’s experience during the Pacific fighting during World War II as a clue to where the service wants to go in the future.

That nod to past battles came after I asked about Esper’s suggestion that the fleet of nuclear-powered aircraft carriers could fall from 11 to as low as 8 in coming decades. Those carriers  would be bolstered by half-a-dozen or more smaller amphibious ships packed with F-35s.

“We’re looking at a range, and we’re going to determine what the threat is, what the requirement is, and then be able to build to that number,” Braithwaite said. “I fully believe that number will be pretty close to where it is today.”

However many carriers there might be, “we’re going to augment that by doing even more work on the CVL,” he said, referencing the nine Cleveland-class light carriers which saw extensive action in the Pacific war. “I’m a big history guy, all right, and the United States Navy won World War II on the backs of our light carriers.”

Marines fly F-35Bs, Harriers and V-22s from amphibious ships. Ships like the USS Wasp are called amphibious assault ships, even though every other country in the world would call them aircraft carriers.

The Navy is refitting several amphibious ships to be able to carry the F-35, giving the ships more combat punch. The new America-class amphibious ships could take up the mission, if not an entirely new class of smaller decks.

“If we can do the same thing [as in the 1940s] and look to build a CVL at one-third, one-half the cost” of a carrier, while keeping carriers “which are going to serve in the fleet for the next 50-plus years,” then it may be possible to slightly shed a few supercarriers while keeping the Navy’s airpower dominance intact, he told us.

When it comes to the overall budget, former acting Navy Secretary Thomas Modly said earlier this year he had found $40 billion in savings in the Navy budget spread over the next five years. Braithwaite said, “I got way beyond” that in his own internal budget scrub this summer.

Modly promised to eliminate commands, slash logistics costs, and cut or outsource back-end functions. Braithwaite didn’t offer specifics, but it’s clear things will look different in many offices once this is all done.

Significant questions remain about how the United States will boost the size of its fleet by some 200-plus ships while also overcoming the huge repair and maintenance issues that have plagued it’s shipyards for years.

“Affordability will be a challenge because the new plan costs about the same as the 355-ship Navy,” Mark Cancian, a senior advisor with the Center for Strategic and International Studies and former official at the Office of Management and Budget, told me in an email. “Savings from procuring smaller and cheaper ships are offset by larger numbers. Although it’s worthwhile to shake the trees for savings from infrastructure and overhead, finding significant funds there is extraordinarily difficult and requires investing political capital. The Navy will likely do what the Army did in night court, cut lower priority warfighting programs to fund higher priority programs.” (D.N.).