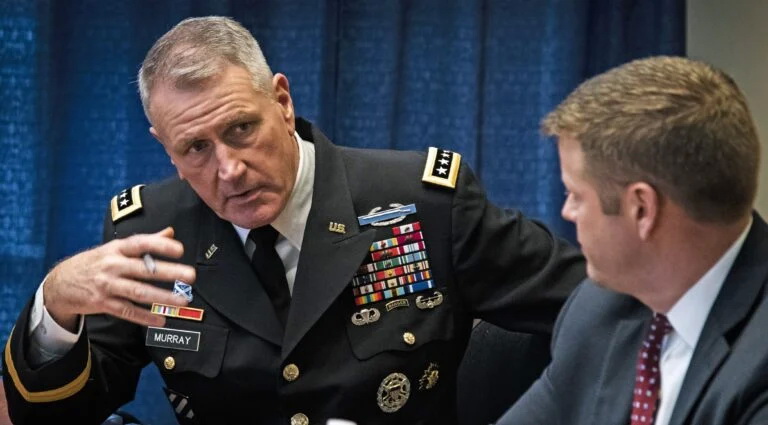 WASHINGTON: If the Army faces steep cuts in future budgets, it may have to sacrifice some of its top-priority modernization programs,but which ones? “Scenarios matter,” Gen. John “Mike” Murray told me. “Part of how you make those choices, at least from my perspective, is how valuable they are in an operational setting.”

“It’s all about an adversary. It’s all about a specific theater. It’s not capability for capabilities’ sake,” the Army Futures Command chief said in an interview ahead of the AUSA 2020 conference. “We talked about the commonalities between the Russians and the Chinese, [but] depending on which theater you’re talking about, whether that’s a European theater or INDOPACOM [Indo-Pacific Command] theater, different capabilities bring different things to that fight, because it’s a fundamentally different fight on different terrains.”

The Army’s TRAC analysis center and others are now studying “specific pieces of terrain in specific scenarios, really looking at the utility of just not the 31 [priority programs] but everything in the portfolio,” he told me.

So how do you calculate that value across a range of possible conflicts? Well, you can run detailed mathematical analysis of different warfare scenarios – and in Murray’s Army Futures Command, “we own 50 percent of the Army’s analytical capability,” including TRAC and other organizations. He’s also reorganized and refocused those analytic units to deliver faster answers to Army leaders’ questions.

“They’ve always done great work, [but] I’m not sure who they were working for and what questions they were trying to answer,” Murray said. “What we’re trying to do is get the analytical community organized around is the most pressing questions from the Army based on operational scenarios – not theoretical scenarios.

“These are three-month sprints,” he emphasized, not interminable academic studies. “When I got into this, I found analysis was taking six months, eight months, 12 months. It was always late to inform decision-makers.”

Those top decision-makers are definitely worried.

“When you see $3 or $4 trillion going [during COVID] for recovery, you see the shadows of the BCA,” the 2011 Budget Control Act that led to steep cuts in federal spending, Army Secretary Ryan McCarthy told the Hudson Institute’s Bryan Clark last week.

“That could be potentially be off the coast coming toward us,” the secretary said. “The fundamentals of the economy are pretty sound, but it’s a tremendous amount of debt that we’ve incurred to deal with COVID — and it was necessary.

“We’re talking to economists, we’re talking to a lot of people” about potential impacts, McCarthy said. “If you’re talking about a flat fiscal environment, there’s nowhere else to go but to cut internally, and we’re going to continue to look at that and hit it even harder.”

The Army Chief of Staff, Gen. James McConville, was blunter in his interview with Breaking Defense: If a program doesn’t perform, it’s liable to get cut.

“We know what our priorities are, we know what our costs need to be, and quite frankly we need to make sure that those who are developing our [weapons are] meeting cost, performance, and schedule — and then if they can’t, we’ll take a hard look at that program,” McConville told me.

[Click here for more from our exclusive interview with Gen. McConville]

Skeptical committees in Congress have already proposed cuts to specific Army efforts for 2021, particularly the ambitious IVAS targeting goggles for the infantry, which could lose as much as $235 million. Final legislative language remains caught in the usual budgetary gridlock that recurs about this time each year. Murray has pressed Congress to reconsider – though he emphasizes he can live with whatever lawmakers decide.

A soldier checks his IVAS goggles’ navigation aides against his compass.

“We spend a lot of time on the Hill trying to explain to them our side of it,” Murray told me. “Even the lowest figure will slow us down a bit, [but] it’s not going to kill the program.” His bigger worry, he said, is “sending the wrong message to the non-traditional industry that we want to bring in.”

In the case of IVAS, the prime contractor that Murray’s worried about is Microsoft. That’s not exactly the kind of small startup typically envisioned as “non-traditional.” But Murray argues that, which while experienced in providing IT services to the government, Microsoft is new to the business of building battlefield hardware. (We’ve heard the IT giant is unaccustomed to and uncomfortable with the degree of congressional scrutiny it’s faced on IVAS).

Meanwhile, Army comptrollers are reviewing the service’s budget plan – the Program Objective Memorandum or POM – for 2022-2026, Murray told me. “We have not officially kicked off POM 23-27, but we’re within a month of the first session,” he said. He and the Army’s acquisition chief, Bruce Jette, have “done a lot of work” to get ready for that formal process, but it’s hard to plan with such uncertainty.

“Let’s just assume there is a budget crunch coming,” Murray told me. “How deep and for how long? We just don’t know that yet.

“There’s still a long way to go, no matter who wins the election, in figuring out what that looks like,” he said. “[So] no budget decisions have been made, no decisions on what stays, what goes, if anything goes… We’re just preparing the groundwork so we’ve got the analysis in our pockets, if and when we have to start making some of those decisions.”

To date, the Army has managed to fully fund its 34 top priority programs: 31 overseen by Army Futures Command’s various Cross Functional teams (CFTs) and another three under the independent Rapid Capabilities & Critical Technologies Office (RCCTO). In years past, “the going-in position for every POM build was CFTs get everything they need and, in some cases, everything they want,” Murray said. “It’s going to be a much more constrained look this time around, and we’re going to have to figure out what is critical… and unlike last year, we’re going to have to roll those 31 CFT projects into the equation.” (A.R.).

If you want to prototype 5G networks on a military base, you need to join...