Acasă Anchete The Navy isn’t part of an Army/Air Force project to build a... 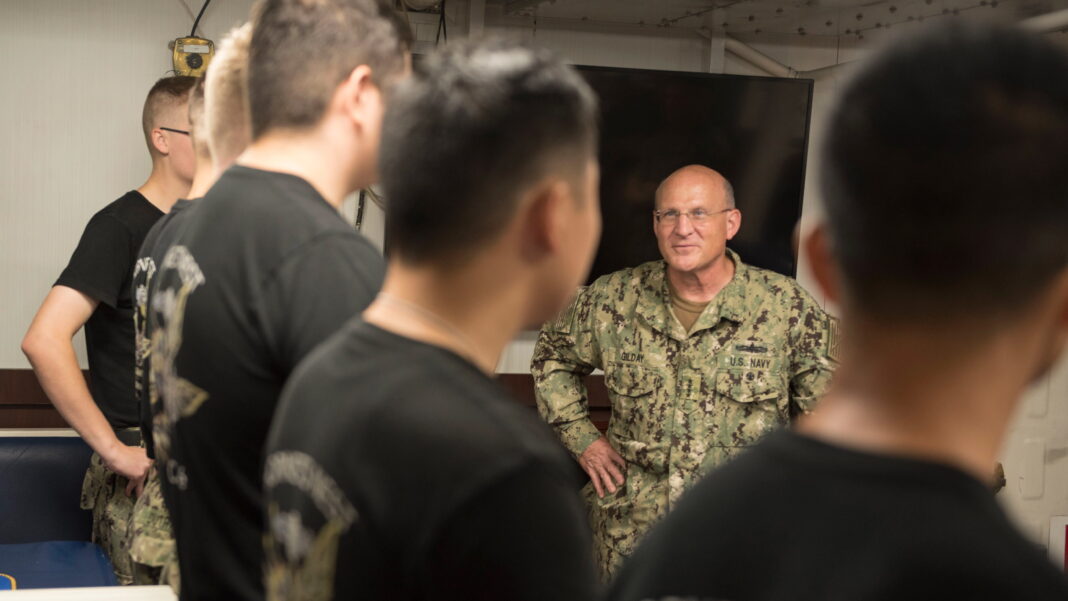 WASHINGTON: The Navy is moving fast to figure out how to connect crewed ships, submarines, and aircraft with the hundreds of new unmanned ships it plans to build, and the Chief of Naval Operations calling for a plan by December.

“Beyond recapitalizing our undersea deterrent, there is no higher developmental priority in the U.S. Navy,” than linking those manned assets to the fleet allowing them to share intelligence and targeting information, Gilday wrote in an Oct. 1 memo obtained by Breaking Defense.

The order came from Chief of Naval Operations Adm. Michael Gilday to the admiral tasked with spearheading the effort, dubbed Project Overmatch. It comes as the service prepares to unveil a new shipbuilding plan. That plan could include more than 200 unmanned ships armed with precision weapons and advanced sensor systems.

The work comes in parallel to a similar push by the Air Force and Army, who have teamed up to develop systems to push data between the two services.

Gilday’s memo to Rear Adm. Douglas Small, head of the Naval Information Warfare Systems Command, came one day before the Army and Air Force announced their own collaboration to build a tactical network, dubbed CJADC2, for Combined Joint All-Domain Command and Control. The plan is to combine data pulled from land, air, sea, space, and cyberspace to coordinate military operations across all those actors and arenas.

The Navy isn’t part of that agreement, though Gilday said during a virtual talk Tuesday that he wants the Navy’s version to “plug into JADC2” once it’s up and running.

Navy officials have said that they want to develop their own networking plan for connecting everything from subsurface assets to rotary wing and fixed wing aircraft before they join with the other services in adding land assets into the mix.

The plans goes much deeper than looking for new ways to run cables or set up software links. The Navy has said little about JADC2 up to this point, but Gilday’s memo informed Small, “your goal is to enable a Navy that swarms the sea, delivering synchronized lethal and non-lethal effects from near-and-far, every axis, and every domain. Specifically, you are to develop the networks, infrastructure, data architecture, tools, and analytics that support the operational and developmental environment that will enable our sustained maritime dominance.”

During his comments at a DefenseOne event Tuesday, Gilday acknowledged the importance of being able to move information from submarines to aircraft together on one network, and the challenge of getting it done quickly. “In terms of warfighting capability, it’s something that we absolutely have to have,” he said.

A few years ago, before China kicked its military modernization into high gear and the Pentagon began to say it was serious about developing unmanned ships on a large scale, a network project like this could remain mired in development for well over a decade, Gilday said, but looking at the world today, “we need it in this decade to deliver unmanned in the fleet.”

The redoubled effort to build out a network for unmanned ships reflects the speed at which things are changing for the Navy. In March, Defense Secretary Mark Esper took control over the service’s modernization plans after finding the Navy’s plans to grow to 355 ships in the coming decades was too conservative, and not in line with budget projections.

The Pentagon worked though a number of scenarios over the ensuing seven months, and has reached a rough consensus on what the share the fleet should take, and is now waiting on signoff from the Office of Management and Budget. Esper and Navy leadership have suggested in recent days the new plan calls for a fleet of over 500 ships, with 200-plus unmanned ships making up a big chunk of that force.

The plan would begin being funded next year in the 2022 budget, making the Navy’s work on this new network critical for how those new ships exercise command and control from manned platforms — or shore — hundreds or thousands of miles away.

That command architecture is critical when considering the missions these unmanned ships will undertake. The Medium Unmanned Surface Vessel is expected to focus on gathering intelligence and acting as a remote sensor, while the Large Unmanned Surface Vessel (LUSV) will fill the role of a forward-deployed missile launcher, bristling with missile tubes and other weapons, Navy planners have said.

Linking together such disparate assets “is not a new concept, but the Joint Force hasn’t perfected that yet,” Gilday said Tuesday. “The Navy needs to perfect it in order to maximize what we want to get out of long range precision weapons, in numbers.”

Small’s work in developing this network falls under the eye of Navy acquisition and development head James Geurts.

Speaking with reporters last month about the service’s overall unmanned ship plan, Geurts said, “we’re not only looking at LUSV as a thing, we’re looking at that thing in a larger context amongst all the other unmanned activity we’ve got going. A key piece of that is, how are we going to command and control all these assets, and what’s the network that they’re all going to rely on?”

His spokesman, Capt. Danny Hernandez, emailed me today that Geurts “is working closely with the CNO and [Marine Commandant Gen. David Berger] to accelerate the fielding of an optimized operational network architecture, leveraging technical experts and best practices across the Navy and Marine Corps.”

Given the Navy’s unhappy history of building new classes of ships on time and on budget following years-long problems developing the Littoral Combat Ship, Zumwalt destroyer, and Ford class carriers, Congress has moved in to slow the service’s surge into the world of unmanned ships, a move that many give the Navy some more time to develop this new network.

In July, the House Armed Services Committee voted 56-0 to send its version of the 2021 Pentagon policy bill to the entire House, a document which boosts Congressional oversight over the LUSV. The House’s skepticism was shared by the Senate, which is looking to fence off money for the effort until the Navy demonstrates it understands the technologies involved. (Paul McLeary).

Israel’s Ministry of Defense and high command have hammered out an emergency plan for an...

House committee wants to hold money back from DoD until it delivers shipbuilding plans, while...

WHY IS CYGNUS UNIQUE?