Acasă Exclusiv “here is a difference in how aggressively the Navy is pursuing JADC2... 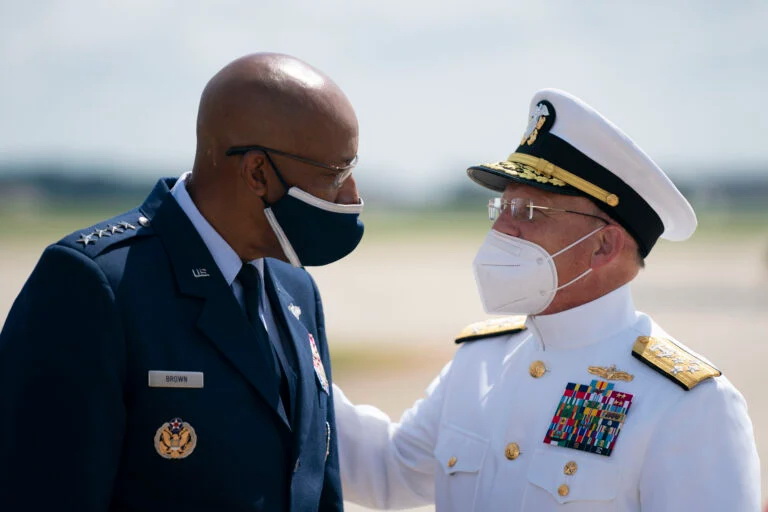 WASHINGTON: Air Force Chief of Staff Gen. Charles Brown says he is talking with his Navy counterpart Adm. Mike Gilday about a possible accord to cooperate in developing a joint command and control network for future all-domain operations — along the lines of the MoU he signed Oct. 2 with Army Chief James McConville.

“I’ve talked with Adm. Gilday. I’m not averse to having a very similar MoU with with him,” he told the Mitchell Institute today in response to my question. “We’ve had a couple of conversations on this, actually, before I came into the chair … but also since I’ve been here.” That said, he added, the end goal is to get to the place where “we’re all moving the same way, the same day” so that such memorandums of understanding are moot.

“So, in answer to your question, I want to engage with Adm. Gilday a little bit more,” he said. “I’ve had a chance to talk to some of the Combatant Commanders about this as well, and they want to also be part of this. So I think there’s plenty of opportunity as we go forward, MoU or no MoU.”

As Paul reported last week, the Navy has initiated its own Project Overmatch effort to build a C2 network linking aircraft, submarines, and crewed ships together and providing them with data from sensors in all domains — air, land, sea, space and cyberspace. Project Overmatch is being designed as a Navy-only tactical network, with Navy leaders up to now insisting that they have to build their own capabilities before linking into a future Joint All-Domain Command and Control (JADC2) network.

JADC2 will allow Joint Force commanders to master all-domain, information-centric war with China and Russia, under a new Joint Warfighting Concept due to Defense Secretary Mark Esper by the end of the year. As Breaking D readers know, Chairman of the Joint Chiefs of Staff Gen. Mark Milley assigned the Air Force the lead role in developing JADC2.

The Air Force launched the Advanced Battle Management System (ABMS) last year to develop hardware and software that together would comprise a military Internet of Things, and serve as the foundation for JADC2. Since its initiation, Air Force leaders have insisted that the ABMS effort is a joint project, and have worked to include the other services in the three “On Ramp” demonstrations of new tech and capabilities held so far.

The Brown-McConville memorandum of understanding will combine the ABMS demos with the the Army’s Project Convergence exercises, initially designed to flesh out a multi-domain tactical C2 network primarily for Army platforms. Brown explained that discussions about the accord had been launched by his predecessor, Gen. David Goldfein. (The two services have dubbed their bilateral effort as CJADC2, for Combined Joint All-Domain Command and Control, to signal they intend to bring in allies. We are going to try to avoid that awful acronym as much as we can, however.)

“The key aspect of this is senior leadership involvement, to help drive this to where it needs to be,” Brown said, with an eye to “how we break down some of the barriers that our service members may think they can’t do, and we can help them move the ball forward for faster.”

“The MoU just actually is a forcing function. It helps force the staff to actually work together, to hold them accountable because they got a piece of paper,” he added with a grin.

Indeed, insiders say that the Goldfein-McConville discussions were spurred by the fact that Air Force acquisition czar Will Roper encountered resistance from lower-level Army leadership to requests for Army equipment and personnel to be involved in ABMS demos. Many in the Army, one source says, “saw the broader programmatic pitch as competing against Project Convergence. In the planning for ABMS, the Army flatly denied the Air Force’s request for specific systems because it wanted to use those resources for Convergence, not support an Air Force program.”

That hurdle should now be resolved, with Brown stressing that he and McConville are both committed to making it work. “We’ve already told our staffs that he and I are going to get together with small groups, and we’re going to do meetings to keep this moving forward.”

This leaves the Navy as the odd-man out in the JADC2 effort. And that go-it-alone stance raises a number of questions. Most obvious is the specter that technical decisions made under Project Overmatch will make it impossible for it to connect with the other services and the JADC2 network writ large.

But it also is being seen as a clear signal that that Navy is less than committed to the very concept of a true Joint network, and to the new ways of war being fleshed out in the Joint Warfighting Concept.

“Did you ever see Dr. No, when he put the three beta fish in the aquarium? Navy is the smart fish, waiting for the two dumb fish to kill each other and tire each other out. Navy doesn’t need or want this mission/set of requirements,” one cynic said bluntly.

“I agree there is a difference in how aggressively the Navy is pursuing JADC2 compared to the Army and Air Force. The Project Convergence and ABMS demonstrations all showed significant Army-Air Force cooperation, with little or no Navy involvement,” said Bryan Clark, senior fellow at the Hudson Institute.

“The Navy, I believe, is focused on building out their Navy Integrated Fire Control network, and connecting it to parts of the Army and Air Force networks instead of pursuing a unified network architecture between the services,” he elaborated in an email. “Partly that may be because the Navy has to operate in areas where they will often not be tightly integrated with Army or Air Force units, but it also seems to be because Navy was pursuing NIFC for almost 20 years and may not want to disrupt that effort to merge it with JADC2.” (Theresa Hitchens).

Israeli experts say the U.S realized withdrawing from Iraq would leave policymakers and the military...