Acasă Anchete “I’m optimistic as a department that we’re moving in the right direction,”... 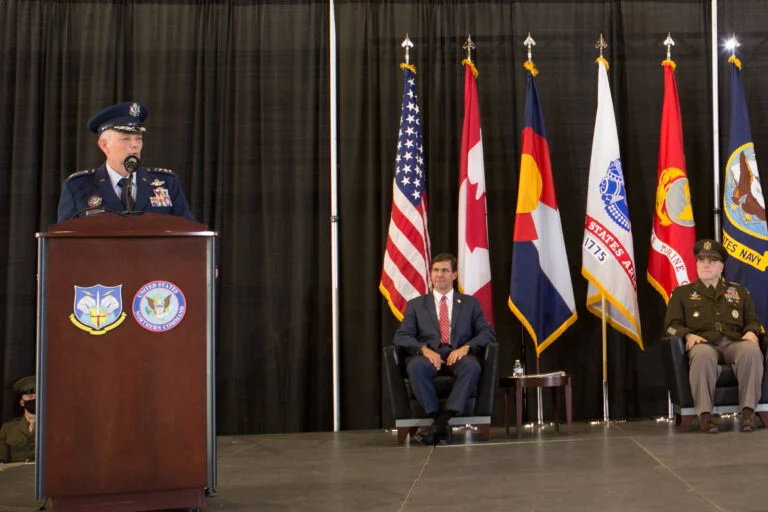 WASHINGTON: As part of the effort to flesh out JADC2, the Combatant Commands are planning a first-of-a-kind exercise in December to demonstrate cross-command connectivity, says Gen. Glen VanHerck, head of Northern Command and NORAD.

“We’re going to continue planning to Joint All-Domain Command and Control events like the one that we had back in September,” he told the National Defense Industrial Association (NDIA) JADC2 conference today. “We’re going to do one in December, where we plan to showcase the first live cross-combatant command collaboration for rapid deterrence and [course of action] development in an information dominance experiment, called Experiment Number One.”

VanHerck offered no more details on the planned exercise, but his point was that DoD, the Joint Force and the services are picking up speed in moving toward a coherent plan to implement JADC2. As Breaking D readers know, VanHerck has declared himself “all in” on JADC2 and the use of artificial intelligence to help commanders with rapid-fire decision-making.

“As we can see, great work is being done, all across the department, to develop and implement capabilities that operationalize Joint All-Domain Command and Control as a concept. So I’m optimistic. I’m optimistic as a department that we’re moving in the right direction. And we have momentum on our side,” he said.

But VanHerck stressed that at the moment JADC2 remains just that, a concept — not a program with a platform or a specific technology set in stone. “In the end, there will be specific platforms and capabilities — they just won’t be called JADC2. JADC2 is the actual concept that will get us there, that kind of develops the requirements.”

As Breaking D readers know, JADC2 is one of the four key underpinnings to the Joint Warfighting Concept now being fleshed out by the Joint Staff, led by Vice Chairman of the Joint Chiefs of Staff, Gen. John Hyten. The concept is due to Defense Secretary Mark Esper by the end of the year. JADC2 will link all sensors across the air, land, sea, space and cyberspace domains into a mesh network that can, in near-real time, integrate that data into a common operational picture for commanders at all levels to access and use to prosecute a high-speed, high-tech war.

Once the Joint Warfighting Concept is finalized, VanHerck said, the next step is development of requirements by the Joint Requirements Oversight Council. The requirements document “will allow all the services and industry to be able to create capabilities” to meet those needs, VanHerck explained.

But to get there DoD needs to invest in the capabilities that can provide “persistent, and complete, battlespace awareness — and that goes from subsurface to space to cyberspace.” He noted that his current concerns were that Combatant Commanders will need to have greater access to space-enabled capabilities, as well as greatly improved capabilities to monitor the more sophisticated and quiet submarines being deployed by adversaries. (C.U.).

“[I]t’s really a good time, and important, for the government to step in and help...

For the first time, Space Command is working with the operator and builder of America’s...