INCISIV National
Acasă Anchete Smith sees a blue wave as exposing fissures within the party over... 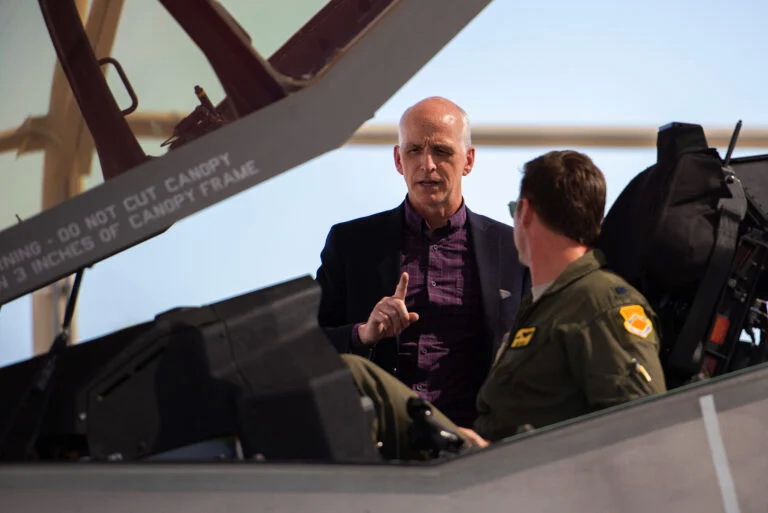 Rep. Adam Smith, Chairman of the House Armed Service Committee, asks a question about the F-35 at Luke Air Force Base

WASHINGTON: The top Democratic defense lawmaker sees the progressive and centrist wings of the party battling it out over defense spending and foreign policy should Joe Biden win the White House and Democrats keep the House.

The party is “going to have some hard conversations,” Rep. Adam Smith, chairman of the House Armed Services Committee, said during a virtual CNAS chat today. “There is a growing wing, the progressive wing of our party, that wants to see the defense budget cut on general principle, basically. They think that spending money on bombs and weapons of war is nowhere near as important as spending money” on social programs and diplomacy. “So they want to reshift those priorities.”

Since the 2018 midterm elections, a growing progressive element in the party has called for a rethinking of defense spending as defense budgets have grown under the Trump administration, a growth likely to stop in 2022 due to the massive national debt and COVID-19 costs.

“The progressive point here is that they want to cut the budget,” Smith said. It’s an argument he hopes to modify by keeping the rate of growth down, while pushing the Pentagon to spend more wisely while stopping the flow of billions of dollars from the Pentagon to pay for President Trump’s border wall.

The two areas that are most ripe for disagreement are “how much do you spend on defense, and what does your presence in the world look like,” Smith said, noting that the progressives are highly skeptical of large troop deployments overseas. “That’s where the Democratic Party is going to have some hard conversations,” which will likely lead to “a fair amount of clashes within” the party.

When it comes to the 2021 defense budget, the chairman blamed his Senate counterpart, Sen. James Inhofe, for slow-walking NDAA talks in recent weeks, saying the committee chairman have “met once for an hour.” Smith claims Inhofe doesn’t want to meet until after the election Nov. 9.

Smith’s comments on the tensions within the Democratic party are not new and appear to indicate a reorientation of priorities in the next few years.

There are some hard budgetary realities that will come home to roost no matter who wields the gavel on the defense committees over the next several years. The national debt, which has skyrocketed as the federal government tries to blunt the effects of the COVID-19 pandemic, will squeeze departmental budgets across the federal government. Pentagon plans already show flat budgets for the next several years.

Rep. Anthony Brown, vice chair of the House Armed Services Committee, said as much last week. “Regardless of who wins” the presidential election, “the pressures on the economy from the coronavirus pandemic and a growing budget deficit are just too great, I think, to see significant growth, if any, in the defense budget.

“Now I do believe that if Vice President Biden defeats President Trump, the president’s budget request may be a bit smaller,” he added during an interview at the Brookings Institution.

Whatever those budgets look like, Smith has some specific points of contention with the Pentagon over how some of that money might be spent.

After months of wargaming, Defense Secretary Mark Esper earlier this month touted the soon-to-be-released plans for a 500-plus ship Navy, which would include more small ships and hundreds of unmanned ships to be used as missile platforms and intelligence gathering.

It’s not clear how that fleet will be paid for, but Smith hasn’t been impressed by what he’s heard so far. “The 500-ship Navy drives me absolutely insane,” he said. “I would much rather have better command and control” and focus less on numbers than capabilities.

In this sense, Smith and the emerging progressive wing might find common ground. Instead of building more and bigger weapons to stay ahead of the Chinese and Russians, the White House can lean on allies and diplomatic means to counter its two biggest rivals.

While not discounting Chinese and Russian military advances, Smith is likely to find some common aground with progressives in his critique of the National Defense Strategy.

“The part of the framework that I’m most concerned about is the degree to which it appears that they want to start two separate cold wars with Russia and with China. And the idea that great power competition means we have to build a military that can dominate both China and Russia in direct confrontation, I do not support that. I think that is an extraordinarily dangerous approach.”

“We seem to be obsessed with the notion that whatever Russia and China are building we have to build 10 more,” Smith added. “We need to have a smarter strategy about what great power competition in this context means. And I think what it means is, you know, how do we deter our adversaries from doing the things that most threaten us. And in a lot of cases that doesn’t have much to do with our military. It has to do with alliance partnerships across the world, it has to do with diplomacy development building relationships.”

If there is indeed a blue wave this fall however, the factions in the rapidly changing Democratic Party will have to find a way to build relationships with one another before they can agree how to do so around the world. (Paul McLeary).

Former intelligence officials told us they were worried about London’s decision to allow the Chinese...

“The Navy’s going to have a huge problem,” Mark Cancian, a fellow at the Center...

This is a just a DoD product. The 2011 National Security Space Strategy was very...