Acasă Anchete „While we will extend and defend America’s competitive advantage in peacetime, the... 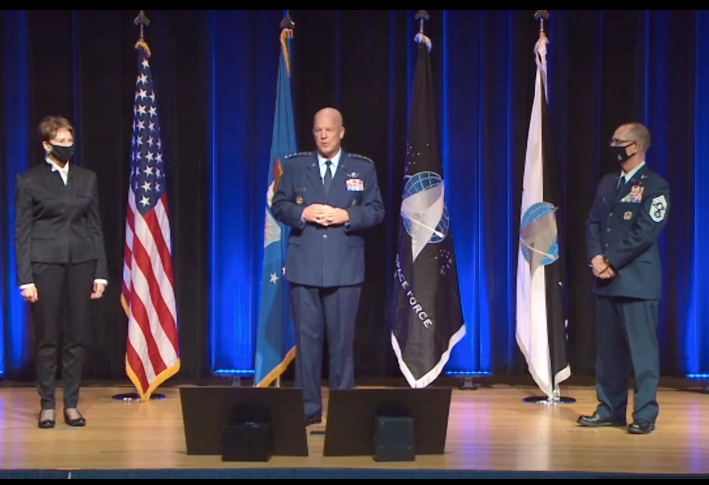 The guidance — which covers all aspects of Space Force development from command structure to new acquisition practices based on digital engineering, to “force design” and to training — is aimed at rapidly building the new service’s capability to handle the “shift from space as a benign domain to a warfighting domain,” Raymond told reporters today.

The guidance “aligns our priorities, activities and goals,” he said. “It’s a roadmap for the future, to compete and deter and win as outlined in the National Defense Strategy.”

The CSO Planning Guidance makes clear the shift from decades of space policy when it says “…the ultimate measure of our readiness is the ability to prevail should war initiate in, or extend to space.” Among the top prioriites it sets are “investments in Orbital Warfare, Space Electromagnetic Warfare, and tactical intelligence portfolios to enable effective defensive options and prompt offensive capability to deter adversaries from initiating conflict in or extending conflict into space. If deterrence fails, these capabilities posture us to fight and win in space.”

Raymond explained that the term “orbital warfare” refers to protect and defend missions unique to the space domain; whereas “space electromagnetic warfare” refers to the space aspects of EW, which is a domain that crosses all the services. The “orbital warfare organization will be really focusing on being able to protect and defend our capabilities that reside in the space domain,” he elaborated.

“Recent resurgence in deployment of modern direct assent and co-orbital ASAT capabilities require us to develop and deliver offensive and defensive options in the near-term, while we transition to a resilient architecture able to mitigate attack, assure capabilities, and rapidly reconstitute in the mid- to long-term,” the document explains.

At the same time, Raymond’s document pledges that the new “force design” also will rely upon partners in industry and other government agencies to provide some capabilities, such as monitoring space weather, tactical communications networks, and positioning, navigation and timing (PNT). Indeed, as one of his first formal edicts, Raymond  released the Space Force’s Vision for Satellite Communications that pledged to create a seamless SATCOM web that would allow military users to “hop” from classified milsat networks to commercial ones to avoid congested lines and jamming on the battlefield.

Raymond’s guidance further promises that Space Force will “consider opportunities to enhance America’s civil and commercial spacepower. …. Civil and commercial developments that pave the way for exploration and commercialization beyond near-Earth orbit will both generate technology that benefits the USSF and require an order of magnitude expansion of our ability to sense, communicate and act to protect and defend American interests in cis-lunar space and beyond.”

As Breaking D readers know, the Space Force has been signaling its desire to expand its activities into cislunar space, the vast area between Earth’s outer orbit and that of the Moon — spurred by China’s ambitious lunar exploration program that many see as militarily motivated.

And in a change from the past secretive, go-it-alone approach to space, the planning guidance commits not only to support allies in building up their own capabilities, but also to consider international acquisitions. As we’ve been reporting, Space Force and Space Command from the get-go have been taking steps to better integrate allies into US space war planning and day-to-day operations, as well as encouraging military-to-military space cooperation in areas such as space situational awareness.

Raymond noted that while close military partnerships in space operations weren’t required in the past because the domain was largely uncontested, working with allies is critical now due to threats from Russia and China. “Space was a benign, peaceful domain and partnerships were not all that critical … That’s not the domain that we find ourselves in today,” he said.

Space Force “will leverage ally and coalition partner capabilities in operations and acquisitions to identify and close gaps in our space enterprise,” the guidance elaborates. “We will take measures to strengthen our allies’ space capabilities. This includes cooperative capability development, professional education and training, and operational coordination and liaison.

“We will reevaluate data sharing agreements and security paradigms that often limit coalition interoperability in space. We will expand partner participation in operations and capability development in order to reduce cost, increase resilience, and accelerate capability modernization,” it adds.

The CSO Planning Guidance also highlights Raymond’s determination that the new service take risks to rapidly transform itself to a lean, mean warfighting machine. “I am willing to take risk in legacy system capacity and availability in order to create recapitalization opportunities for next- generation resilient and defensible systems,” the document stresses.

“While America’s legacy military space capabilities have been in the fight enabling combat effects for decades, our systems have not been consistently designed for war that initiates in, or extends to, the space domain. Adapting legacy designs will not produce effective systems for conflict because combat considerations favor fundamentally different design and engineering choices.”

Finally, the document lays out how the Space Force will be organized and commanded.

Creating a “flattened” hierarchy is a top priority, as witnessed by its reorganization into only three field commands into a compressed structure of “deltas” and “echelons” rather than the Air Force’s wing-based organization. The streamlined headquarters will have four offices: Human Capital; Operations to oversee readiness; Strategy and Resources to set policy; and a new Technology Innovation Office to shepherd transition “to a data-driven ‘digital service’.”

It also sets out a command style aimed at optimizing speed of decision-making by transferring authority to take action lower on the chain of command.

“The potential speed and scale of space warfare means a traditional ‘command by affirmation’ style, where a subordinate echelon assumes they are limited to narrowly prescribed authorities unless explicitly authorized by higher echelons, likely incurs a dangerous disadvantage,” the document say. “Therefore, I direct a default command style of ‘command by negation’ where subordinate echelons are expected to default to action except where a higher echelon has specifically reserved authority.”

The next step in “inventing” the Space Force, Raymond said, will be a plan to implement the guidance. That Implementation plan currently is in the works, and is expected to be published next month, he said. (D.N.).