INCISIV National
Acasă Anchete After decades fighting guerrillas and terrorists, France is refocusing on Russia and... 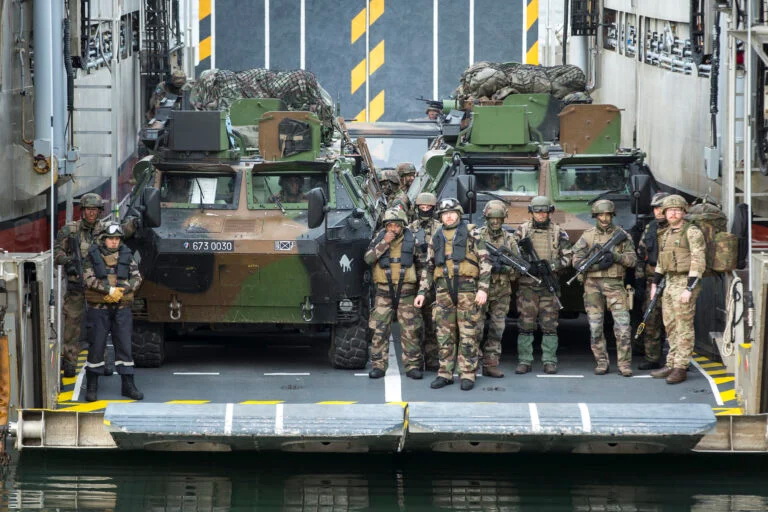 WASHINGTON: The French and US armies have exchanged general officers to coordinate preparations for the Warfighter 21-04 exercise beginning next April. France is increasing its defense budget for the first time after decades of decline, and it’s eager to collaborate with the US against both Russian and Chinese threats. But that doesn’t mean buying US weapons, copying US doctrine, or embracing America’s obsession with high technology.

“The French army has maybe a less technophile approach than other armies,” said Maj. Gen. Michel Delion, who heads the French Army’s Center for Doctrine & Command Teaching (CDEC). Yes, working together with the US requires interoperability, Delion told an Association of the US Army webinar this morning. But even more important, he argued, is the human dimension, which requires ramping up officer exchanges.

A French one-star general is now deputy commander of the US Army 3rd Division, and since January, an American two-star has served as deputy commander of France’s 3rd Division, which will operate as a subordinate unit to the US Army III Corps in Warfighter 21-04. (Warfighter exercises are all-out stress-tests for command posts, not live field exercises for rank-and-file troops, whose participation is largely simulated).

“Our challenge is not technical,” agreed the US two-star, Maj. Gen. Todd Wasmund. “Most of our challenges have to do with our policies,” he said, which often prevent the two armies from sharing information – particularly intelligence data – even when their technologies are technically capable of exchanging it.

That said, there’s still plenty of technical nitty-gritty to work out. But the French see the solution in implanting common technical standards, not in buying the same hardware. It’s better to pursue “compatibility of standards” than to buy “standardized equipment,” Delion said. Future threats and crises will be diverse, he argued, so the allied nations need to maintain a diversity of different approaches to match, rather than attempt to clone the US.

French amphibious forces during the Trident Juncture 2018 exercise in Norway.

Sure, the two industrialized democracies are adopting broadly similar approaches to similar threats. Both are struggling to implement new strategies focused on deterring conflict with great powers even as they remain enmired in counterinsurgency and counterterrorism commitments around the globe. “For 2019 alone, we’ve suffered 23 killed in action and more than 500 wounded,” Delion said. (The US lost 22 killed in Afghanistan in 2019, 12 in Iraq, and five in Syria).

Both armies have combat forces in Eastern Europe to deter the Russians: 300 French soldiers with dozens of armored vehicles have deployed to Lithuania. Both are increasingly anxious about China. The French army chief, Gen. Thierry Burkhard, is publicly concerned for French territories in Polynesia and New Caledonia, which make France a Pacific power.

Both armies are deemphasizing rehearsals for counterinsurgency and counterterrorism deployments and refocusing on exercises for high-intensity state-on-state conflict. Both are deemphasizing independent operations by brigades and strengthening higher-level formations like the division and corps, which are the focus of the Warfighter exercise upcoming in April. Both countries are investing in artificial intelligence, space, cyber/electronic warfare, battlefield air defense, and wireless command-and-control networks, and both are embarking on major modernizations of their armored forces.

But the details are very different. Take that modernization, for instance. The French armored vehicles are farther along, are less technically ambitious and are significantly lighter than the Optionally Manned Fighting Vehicle, weighing up to 50 tons, that the US is planning to replace the M2 Bradley. That reflects France’s longstanding love affair with lightweight wheeled armor, which is not only cheaper to build and operate, but also easier to deploy and operate in distant territories with poor ports and flimsy bridges, like Mali or New Caledonia.

Now, France and Germany are studying a new Main Ground Combat System (MGCS) to replace their existing Main Battle Tanks, the German Leopard II and the French LeClerc. But the timeline to deliver an actual vehicle is 15 years, plenty of time for the project to get derailed like so many ambitious inter-European efforts.

What France is actually buying here and now is the domestically produced SCORPION program, estimated at $6.8 billion. SCORPION includes upgrades to 200 LeClercs, but focuses on lighter, wheeled armor. (Just to prove the US military has no monopoly on awkwardly contrived acronyms, the formal name of the French effort is Synergie du COntact Renforcé par la Polyvalence et l’Info valorisatION). The current plan calls for purchasing:

The SCORPION program will gradually build up to “a complete overhaul of major equipment by 2030-2032,” Delion said today. The near-term plan, he said, calls for “a SCORPION battle group [i.e. battalion] in 2021, then a SCORPION brigade in 2023.”

After that, “we want to think again how to conduct large scale combat operations at the corps and division level,” Delion said. France is planning a live-fire division-scale exercise in 2023 and would love to have US participation, he said. By 2025, they want to do an exercise with a US division subordinate to a French corps.(D.S.).