INCISIV National
Acasă Armata “Food is emotional, and this year more than ever, it’s so important... 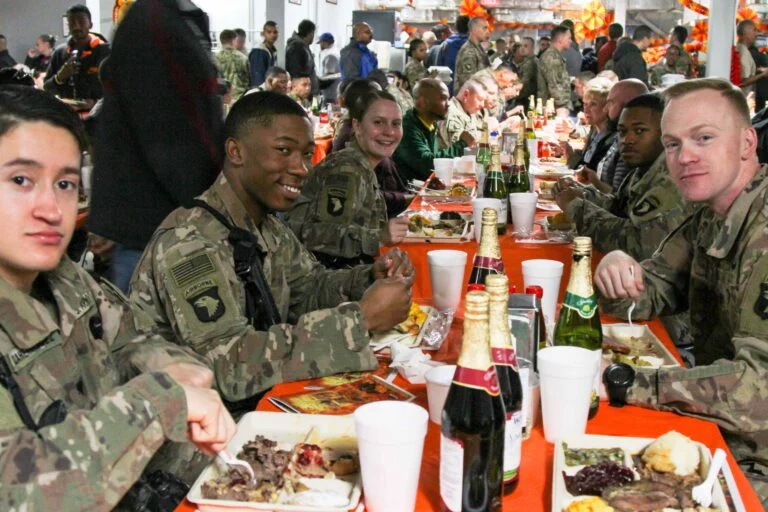 Soldiers enjoy a Thanksgiving meal in 2018, but COVID will mean the holiday looks very different on US bases this year

WASHINGTON: In a tradition that has spanned world wars, small deployments and everything in between, the Pentagon has put its logistical prowess into action again this year in order to fly, ship and drive 131 tons of Thanksgiving meals to troops overseas this year.

Despite the lowest troop levels in Afghanistan in almost two decades, there are still tens of thousands of US troops stationed overseas this year, and they’ll work their way through hundreds of thousands of pounds of turkey, beef, shrimp, pies and sweet potatoes at bases from Iraq to Honduras to Japan.

The Pentagon’s Defense Logistics Agency, as usual, has been in charge of making it happen.

“Food is emotional, and this year more than ever, it’s so important that DLA Troop Support got the turkeys, hams and all the trimmings to our troops wherever they are stationed,” Army Col. Eric McCoy, DLA Troop Support Subsistence Director, said in a statement. “Our supply chain takes the holidays very seriously. Our troops are far away from home, and they definitely look forward to this meal. Disappointing them is not an option.”

This year will not see the large mess hall gatherings typical of the holiday, thanks to COVID-19 restrictions. They’ll be grab-and-go, but the food will remain the same. The change in the dining routine will mean “the holidays will look quite different this year for everyone,” said DLA Troop Support Commander Army Brig. Gen. Gavin Lawrence. But even with the lack of large gatherings, Lawrence added, “we want to make sure they get that taste of home no matter where they are in the world.”

This year, service members around the world received:

Those numbers are a little different from 2019’s shipment, which saw drastically fewer whole turkeys and about 14,000 lbs. more roasted turkeys, indicating that employed units are cooking more of their own birds this year.

In 2019, Thanksgiving meals for all overseas troops included:

The DLA started to plan for this year’s meal in March; most of the 131 tons of ingredients were overseas by September, while bigger items, like turkeys, began arriving overseas in October. (S.D.).