INCISIV National
Acasă Anchete “When you can launch an austere airbase in a space capsule, that’s... 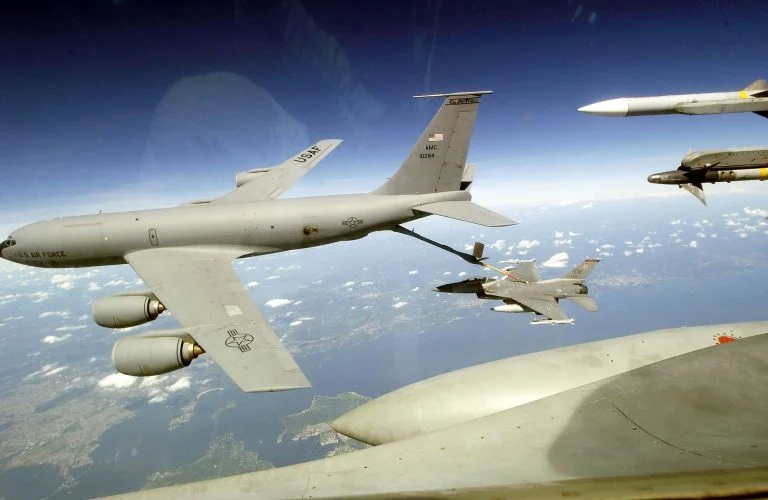 WASHINGTON: The Rapid Capabilities Office will take over managing the Advanced Battle Management System (ABMS) and its sub-systems as they are ready for prime time — with the first tech coming on line related to cross-platform comms and data links.

“I expect that we will have the first things bought, connected to real platforms, occurring next year,” Air Force acquisition czar Will Roper told reporters today.

Specifically, ABMS software providing radio/comms links — such as commandONE, omniaONE and meshONE — have been proven during the past ‘Onramp’ demonstrations, with commanders clamoring for them to be made available for fielding, he explained. “These are ready to go be purchased and installed. They’ll likely all be consolidated on many platforms into one thing, one pod.”

Roper said an airborne tanker likely will be the first aircraft to carry an ABMS suite allowing it to link to the nascent “IoT.mil,” in large part because of the enthusiasm shown by Air Mobility Command for expanding the data-relay capabilities of the fleet.

“I think tankers — I won’t say which one — but I do think tankers might get to the goal line first, but there are other platforms hot on their tails,” he said. “But once there’s ‘tankerONE,’ then you can start talking about: ‘Well, what’s its smart-device function mean? What does it do aside from its day job, aside from just being a tanker what else does it do?’ That will start allowing us to think about how ABMS changes the fight. That also allows you to track what’s next — you know, when is there an EagleONE or a RaptorONE?”

Roper signed a directive today assigning the ABMS “delivery phases” to the RCO, which currently manages acquisition strategy for many of the service’s most sensitive programs, such as the B-21 bomber. However, the service’s Chief Architect Preston Dunlap will continue to be responsible for honing the ABMS masterplan and bringing new experiments into future Onramp demos, an Air Force press release says.

The directive, provided to reporters today, creates an “ABMS Management Construct” that details the responsibilities of both the RCO and Dunlap’s team. For example, Dunlap will create the technical requirements for each ABMS sub-element, based on Air and Space Force needs and capabilities proven in the demos. The RCO, by contrast, will develop the ABMS Acquisition Strategy and oversee individual projects including costs, schedules and performance.

Roper said the timing of the move is not a direct result of widespread concerns expressed about ABMS by Congress and its watchdog, the Government Accountability Office, about the lack of specific requirements, performance metrics and acquisition processes. (Congress, by and large, traditionally has been indulgent of RCO’s activities.)

Rather, Roper said, it was driven by the fact that ABMS has “products ready to go to the field” and that future demos will involve more emphasis on showing how those can enhance both platforms and battlefield performance overall. “I think it’s a ‘happy coincidence’,” he explained, “and I think this will help with Congress. I think it will help with the Air Force.”

ABMS isn’t the only service acquisition effort that has faced congressional scrutiny (and/or budgetary swipes) this past year — with Roper’s similar, iterative approach being taken for the Next-Generation Air Dominance (NGAD) program also taking flack from both sides of Capitol Hill.

Roper nonetheless said he is pleased with where NGAD’s effort to develop a sixth-generation fighter, and the Digital Century Series concept for rolling out updated aircraft every five or so years, has come so far.

“On Next-Generation Air Dominance we will go back to the mattresses for it. I feel like we generally moved the ball quite a bit this year on the acquisition strategy, both inside the building and outside the building,” he said. “There’s general enthusiasm for using digital engineering; cautious optimism that it might break the aircraft procurement curve in a way that’s beneficial — meaning not taking forever to develop and forever to test. At least enough optimism to allow us to try it.”

One of the problems with convincing naysayers of the value in the NGAD approach, he explained, is the simple fact that so much of it is classified.

“You’ve got to get the classified details to see what we’re really doing; to see the magic that is truly behind the door. And it helps a lot when we’re able to do classified discussions. But during COVID-19, classified discussions are very difficult to do. And that’s beyond this program; that’s something we should be mindful of is during the pandemic,” he said. Because classified developments represent the US military’s future ability to “overmatch” peer competitors, he stressed, for “NGAD, and everything else that we’re protecting heavily, we need a little extra latitude to ensure we don’t shortchange the future.”

On the other hand, Roper said, with obvious resignation, “any future program is always a potential target for for marks, because it is the future and it’s not currently in operations. … This is just old hat for me. When you work innovation and new technologies, the system challenges you and it should — not just any idea ought to get taxpayer money and to go see the light of day.”

Likewise, Roper said he intends to continue to engage with Congress on their concerns about the Air Force’s push for more funding flexibility and its approach to “Middle Tier Acquisition” (Section 804) authorities for rapid prototyping and fielding.

“I will certainly re-argue my case for ‘Middle Tiers’,” he said. “We’re still sitting at around 125 years that the authority has saved us in terms of time spent working actual program details, as opposed to projected program details. So, I’m a big fan of it, and, really, am willing to submit to anything Congress would like, in terms of accountability and oversight.”

Asked about the recent dismal GAO report on aircraft readiness, Roper essentially agreed that the challenges limiting mission capable rates will “continue and likely get worse.” He explained that this is simply an artifact of the advanced age — on average, 23 years — of most of the Air Force’s fleet.

“There’s not infinite money to throw at these old airplanes,” he said. “So that is just a fundamental thing that has to change about the Air Force. The Air Force should have new airplanes. It should focus its funding there, not focus its funding on keeping geriatric airplanes flying into their twilight years.”

This problem is one of the reasons Air Force maintenance personnel are so eager to adopt predictive maintenance tools and capabilities, which can help reduce sustainment costs, Roper noted. “Predictive maintenance has gone like wildfire across our legacy fleet. We’re across 16, I believe, platforms today, with plans to get across the entire Air Force inventory in a couple of years. It has revolutionized nearly all practices for how we keep airplanes flying, courtesy of technology and techniques that were matured by commercial industry, including the airlines.”

” And I have to give a shout out to Delta Airlines for partnering with us,” Roper added, “and teaching us how they do predictive maintenance, and their supply chain controls. By adopting those same procedures, I’ve seen a huge jump and how well the fleet can be maintained.”

In his wide-ranging discussion today, Roper addressed several space-related topics including: the future use of commercial satellite communications (SATCOM); the prospect of using suborbital transport for delivering personnel and materiel to hotspots; and the future possibility of Space Force ‘boots on the Moon’ or in orbit.

The ABMS Onramps up to now “have been highly successful showing the value of commercial SATCOM to Air Force platforms,” he said. “It’s highly appealing for us, and I think we’re definitely leaning towards integrating it across fleets — likely beginning with mobility.”

On the other hand, he said, “what the Onramps have shown us is that there are things we now need to fix on the platform’s themselves if we’re going to truly unlock capabilities like the ones SpaceX and other companies bring to the table. So, as I look at, as an example, our tanker fleet, our KC-135 can certainly benefit from having commercial SATCOM integrated on the tanker to get a greater ability to transmit [data] off and on, but there are changes we need to do on the platform itself so that it’s hardware isn’t the limiting factor for how much data we can move.”

As for Transportation Command’s interest in exploring the use of SpaceX’s Starship for ferrying troops and cargo to far-flung battlefields, Roper waxed enthusiastic — but cautioned that in the near future the only funding likely will continue to be for small R&D and exploratory efforts.

“But I hope that we won’t turn a blind eye, because I do think there’s really interesting thinking,” he said. “When you can launch an austere airbase in a space capsule, that’s frickin’ awesome! Just to be able to just have it come down, halfway around the world, with everything you need to be able to maintain and operate a small fleet of airplanes — refuel it, rearm it and get it back in the fight.”

Sending a small number of Special Operations troops to hotspots might be another highly useful mission for such planes, given the “very fast lightning clashes of technology” that will characterize future conflict between high-tech militaries and favor those who are “exceptionally responsive,” he said.

Roper, whose love of all things science fiction is well known, said with a laugh that although he would “sign up” for it, he doesn’t see Space Force troops actually being stationed off the Earth any time soon. “I don’t think anything is off the table, in terms of creative thinking for space. Now, people going into space to fight wars has not come up in a meeting that I’ve been in,” he said.

“But people thinking very broadly about cislunar space, the democratization of the asteroid belt as people move into mining, thinking very long-term thoughts, those are fun meetings to be in because it’s foundational thinking for space,” he enthused. “Stuff like asteroid mining sounds like science fiction, but all of the major investment houses believe it will happen. I saw articles just last week about asteroids that have been identified that have more value than the entire economy of the US, so I love those kind of thoughts.”

Still, he explained, for the moment costs are a key limiting factor, because just as with putting people in airplanes, putting people in space is an expensive undertaking. Indeed, he said that he sees the Air Force moving more and more toward autonomous drones and future AI-enabled aircraft and away from pilots as those capabilities mature.

“Space starts autonomous, and before we introduce people, there’s probably a lesson to learn from the Air Force,” he said. “But if the calculus changes the price point changes. Then, of course, that would change how you would think about missions relevant to them.” (D.S.).