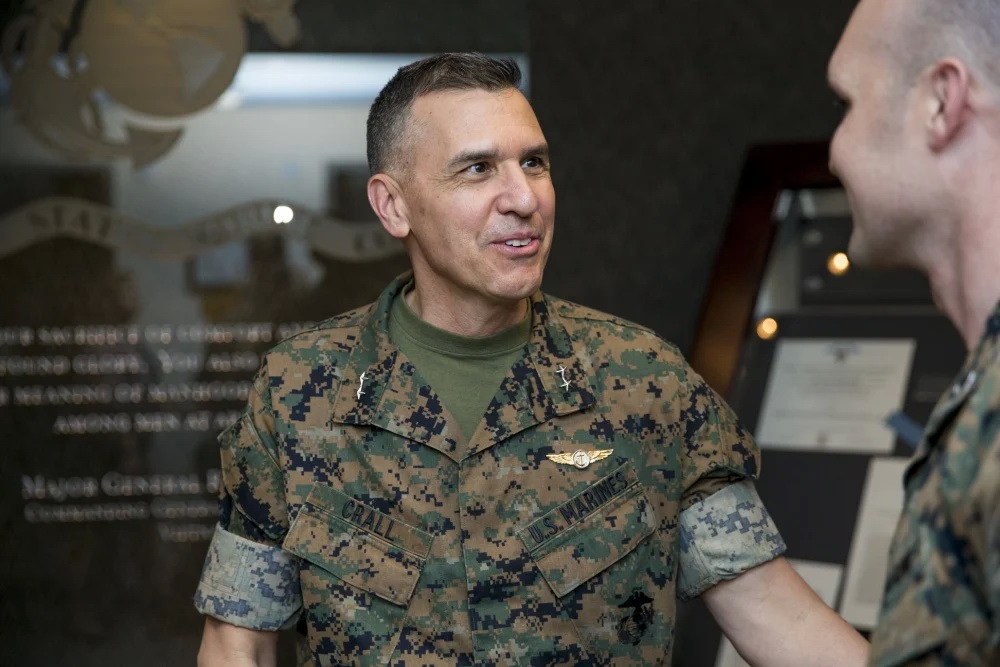 The Joint Staff plans a lightning-fast analysis of the gaps in service capabilities needed for implementation of Joint All-Domain Command and Control (JADC2), with results expected as soon as the end of February, says Marine Corps Lt. Gen. Dennis Crall, who leads the effort as the head of the J6.

“That gap analysis starts in January. We expect by the end of February to produce our JADC2 Posture Review. And that Posture Review will show the department exactly where we are deficient in executing our mission or missions,” Crall said in an exclusive, one-hour interview.

“We don’t believe we can have an effective strategy with real milestones if we don’t look at our gap analysis,” he said. “That is what we will use to serve up against the funding strategy, and we will have to prioritize those to make sure we can deliver that capability.”

Meanwhile, the J6 is within “weeks” of  completing the overarching JADC2 strategy, said Crall. That will go to Chairman of the Joint Chiefs of Staff Gen. Mark Milley and presumptive Defense Secretary Lloyd Austin for approval and signatures.

The J6 held consultations with DoD and service leaders to coordinate on the draft JADC2 strategy during the week of Dec. 21. “We’ve got some good feedback. We have some very discreet lines of effort and we now have a roadmap. … We’ve written it and now we’re going through that corrective phase of taking in some of that good input,” said Crall, whose official title is director for command, control, communications, and computers/cyber chief information officer, Joint Staff J6. “The plans of attack and milestones are not quite done. Once the strategy is determined, we then have to lay out who’s responsible for which pieces, and then look at funding against those.”

Not A Program; An Approach

Crall explained that JADC2 isn’t just a network to link all sensors to all shooters, but is a new approach to military decision-making. “JADC2 is that larger, broader — in simplistic terms — ability to sense, make sense, and act,” he said.

The JADC2 strategy, he said, is separate from — but inexorably linked to — the Joint Warfighting Concept, initiated by former Defense Secretary Mark Esper. The JADC2 strategy is a strategy for decison-making. The Joint Warfighting Concept is the strategy outlining the new American way of war known as All Domain Operations; that is, next-generation, information-based wars using enormous amount of fast computer analysis across the land, air, sea, space and cyberspace domains.

The JADC2 strategy will be incorporated into all the supporting concepts that make up the Joint Warfighting Concept — which include, as Sydney and I reported in July, how to manage joint fires and to create so-called information advantage. “There isn’t a supporting concept that doesn’t have information over the OODA Loop … at the heart of successful execution,” Crall said. (The OODA Loop is the cycle of Observe, Orient, Decide and Act, first described by legendary strategist John Boyd as the key to outthinking adversaries. It lies at the heart of most modern US military strategy.)

Yes, all this is confusing, Crall admitted, in part because of the short-hand and multiple, duplicative acronyms being used by the Pentagon and the services.

“I’ll describe a little bit of what JADC2 is and isn’t, because it is not that clear to many, and I think we’re responsible for that. We’re rolling out, hopefully, a campaign to clear up some of the misconceptions,” he said. “JADC2, unfortunately has a lot of the same letters in the acronyms that involve things like our Joint Warfighting Concept and JCC2, which is our command and control subconcept for the Joint Warfighting Concept. And then JADC2 has been used in some cases narrowly as a ‘sensor-to-shooter’ solution by some.”

However, Crall said, JADC2 is “something much bigger than maybe what we’ve seen in the past. “This is all about adapting to an adversary’s prowess in what would be a peer or near-peer fight, where information and digital superiority — really information advantage — is key. That’s the outcome of JADC2.”

For example, he said, JADC2 also has a key role in how the US military will conduct operations “below the threshold of armed conflict — actions that are taking place now in the cyber world — [where] JADC2 could benefit speed of decision and processing information,” Crall said. “JADC2 has a lot of play way ‘left of bang’ from some of the more conventional action that we talk about; and that has been a tough message that I think the J6 has to do a better job of getting out.”

Automation at the hub

JADC2, at its heart, is about using emerging machine learning and artificial intelligence to automate access to, analysis of and sharing of data among commanders and forces in the field — in near-real time and across all domains, he explained.

“JADC2 is about automating all of it,” Crall said. “It is about taking advantage of that sensor-rich environment — looking at things like data standards; making sure that we can move this information into an area that, again, we can process it properly; bringing on cloud; bringing on artificial intelligence, predictive analytics; and then undergirding this with a network that can handle this, all domains and partners.”

The “lines of effort” identified by the JADC2 strategy — that is, the discrete functionalities required to build JADC2 functionality — include “pursuit of a common data fabric,” Crall said. That refers to a set of standards and algorithms that allow data to be shared among different weapon systems, different C2 networks, different organizations and services and across different levels of security. The services, he said, have made it very clear that such standards are a top-priority. This is because “data is an integral piece and a prerequisite for most of what we do.”

Figuring out how allies and partner nations can be integrated into JADC2 is another element in the strategy. “You would probably not be surprised to see a line of effort devoted entirely to mission partner environment, where we want to ensure that our partners plug into this, as I mentioned, very early on, and don’t become an afterthought.

“You probably also would not be surprised to see a line of effort centered on network improvements,” Crall added. “What good would it be to build the apparatus that we just described if the network was too fragile to carry it and deliver it in the area that you would want it to go?”

Crall said that one of the reasons it is so important to speed finalization of the JADC2 strategy and doing the posture review is to ensure that individual efforts by the services to build their own next-generation C2 networks for All Domain Operations don’t conflict.

“They have these mission threads, we call them, or threadlets, where they want to start the very distinct areas of jump-starting elements of JADC2,” he said. “You may have heard them by other names: the Air Force talks about ABMS [Advanced Battle Management System]; the Navy talks about Overmatch; and the Army about Convergence. This isn’t about a competition with folks running off in different directions, and we’re going to pick. This is about good work being done in all of these lanes, but (also) making sure that we don’t go off and do our own [thing] at the expense of the whole. … We’ve got to move in a common direction.”

As for actual implementation of the JADC2 strategy, a key start will be figuring out how to “translate” between and how to link the myriad incompatible C2 and communications networks currently used by by the services, Crall said. (And even within individual services — think F-22 and F-35 comms.)

However, Crall said, DoD needs to provide “equal attention” to “making what we own interoperable” and ride herd on the development of new capabilities to ensure compatibility. The military can’t afford to “spend so much of our time dealing with legacy that we don’t look at what we’re building and what we’re delivering,” he stressed. “So, the key is we’ve got to do both of these simultaneously.”

That said, he noted that interoperability must come first because the operational commanders of the Combatant Commands “need to meet the services where they are, because that’s what we have to fight tonight with.”

Another reason the strategy and posture review are important is they are necessary tools to allow better engagement with Congress, which up to now has been skeptical — especially of ABMS, which is the service contribution to JADC2 farthest along. Crall stressed that Congress has every right to demand information that allows them to judge the merit of the JADC2 endeavor, saying that DoD needs “immediate engagement with professional staff members — so getting the PSMs to see what we’re doing — and then eventually getting our leadership to present that to the members themselves in these various committees, or as individuals who have expressed interest.”

“Without a plan and the metrics to show our progress — how we’re spending the money against what benchmarks and what deliverables, –we’re never going to be able to satisfy a very reasonable requirement of ‘show me that this effort is worth it’.” (Theresa Hitchens).

“We’re going to know our adversaries better than they know themselves,” boasted Gen. Paul Nakasone....

The effort falls in line with Pentagon efforts to deploy more punch at longer ranges...