INCISIV National
Acasă Administratie Despite a heavy-handed military presence at earlier protests, there were no... 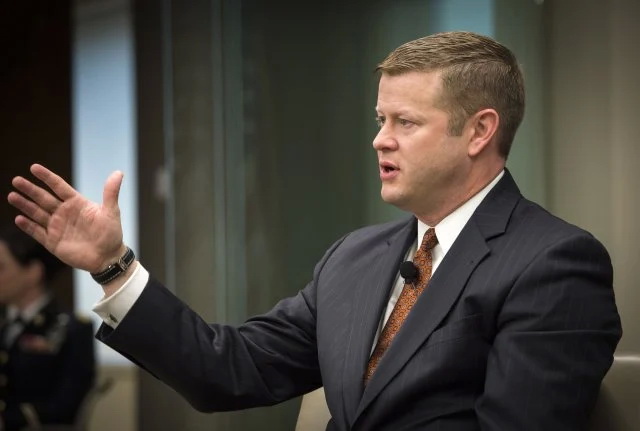 UPDATED from Pentagon briefing WASHINGTON: “Yesterday was a horrible and shameful day in our history,” Army Sec. Ryan McCarthy said this afternoon, speaking alongside Washington, DC Mayor Muriel Bowser as he pledged thousands of National Guard reinforcements to secure the city.

Why, reporters asked, was there no military presence at the Capitol yesterday afternoon when it was stormed by radical Trump supporters, in stark contrast to the thousands of troops deployed during Black Lives Matter protests earlier this year, when two Guard helicopters buzzed peaceful demonstrators? McCarthy suggested a failure of intelligence – by law enforcement, not the military, which by law cannot gather intel on US citizens – and a failure of imagination by everyone.

For domestic law and order operations, “we receive our intelligence from law enforcement agencies, whether they’re federal or local,” McCarthy said. “It was the going-in position that it would be somewhat similar to Nov. 14th , Sept. 12th, [in terms of] the types of the groups that were there — but [we] had no wildest imagination that you could end up breaching the Capitol Grounds.”

The Army is now scrambling to prevent a repeat disaster, especially at the inauguration of President Joe Biden on Jan. 20. “The entire DC National Guard has been mobilized,” McCarthy said. “We have also received the support from state of Virginia, Maryland, Pennsylvania, New Jersey, Delaware, and New York.”

The governor of Virginia has also dispatched 200 state police to support DC.

UPDATE BEGINS How many Guard troops are in the city now? At his first briefing this afternoon, alongside Mayor Bowser McCarthy gave a total of 940, only to revise that slightly downward, to 834 in a second briefing from the Pentagon press room.

“We have 741 personnel on the Capitol grounds, right now,” he said,”

93 personnel distributed across 31 checkpoints to stop…vehicular traffic… from about Ninth Street Northwest to 17th Street Northwest.” (The DC Metro Police Department is handling the bridges to the south, he said).

But “there will be 6,200 guardsmen in total by the weekend.” McCarthy promised. The plan is to have 850 Guard troops on the Capitol grounds at any given time, pulling continuous 12-hour shifts, as well as securing other points throughout the city.

The Guard is also helping replace the flimsy, waist-high barriers that failed to keep the mob out of the Capitol. “At 9am, this morning we began erecting a seven-foot, non-scalable fence,” he said, “[running] from Constitution, Independence and First Avenue [to] the front of the Capitol.” As of his second briefing, which began at 3:30 pm, he said that the barrier was “95 percent” complete. UPDATE ENDS

“These personnel and this security measures will be in place for no less than the next 30 days,” the Army Secretary said, “and we’ll be … in constant coordination with the Capitol Police and the mayor’s office.”

McCarthy was appointed by President Trump, but there has been speculation he might remain at his post for at least the early days of the incoming Biden administration. Is that still likely after yesterday’s debacle? We’ll have to see.

McCarthy spoke to reporters twice today, the second time from the Pentagon with other defense officials, but the first time along Mayor Bowser, a Democrat, and police leaders. Bowser called for Congress to pass legislation giving her office the same authority over the DC National Guard as governors have over their state Guard units. Currently, the Army Secretary – in this case, McCarthy – controls the DC Guard, and the district government must request specific numbers of troops for particular missions.

“Our congresswoman has a bill in the Congress right now to give the Mayor control of the DC National Guard,” Bowser said. “What’s different is, we would not make requests to the Secretary of the Army for Guard support, [and] we wouldn’t have to clear a deployment plan with the Secretary of the Army.” Instead of having to limit Guard troops to specific areas and missions approved by the secretary, she said, “we could be nimble in how we change it.”

“What wouldn’t be different…would be my ability to put the National Guard on the Capitol steps,” she said. Even if DC became the 51st state, which Bowser supports, “I wouldn’t be able to do that as a governor, nor would I be able to use our state police on the grounds of the Capitol.”

Congress has entrusted the protection of its buildings and personnel to the US Capitol Police. This independent agency has over 2,000 officers to protect the Capitol congressional office buildings — compared to 3,700 for the entire DC Metro Police Department, which protects the most of the rest of the city. The Capitol Police is now facing intense criticism for its complete failure to stop the mob.

So what went wrong? While law enforcement and the Army were aware of protest activity planned for Jan, 6th, estimates of the anticipated crowd were “all over the board,” McCarthy said during the Pentagon briefing, from a low of 2,000 to a high of 80,000.

“We engaged with the Capitol Police last week and into the weekend,” said Ken Rapuano, the assistant secretary of defense for homeland security., speaking alongside McCarthy from the Pentagon. “They confirmed… on Sunday, 3 Jan. they were not going to have any request for assistance from DoD.”

However, the DC Metro Police Department did ask for help in managing the anticipated foot and vehicular traffic. The Army provided 340 National Guard soldiers, most stationed at traffic control checkpoints and Metro stations, but backed up by a small chemical-biological hazardous materials team, a command & logistics element at the DC Armory, and a 40-soldier Quick Reaction Force on call for emergencies at Andrews Air Force Base, which lies just outside DC in Maryland.

“No other requests were made after a series of meetings and deliberations with all stakeholders, interior, DHS, Capitol Hill Police and others into the lead up of January 6,” McCarthy emphasized. “There was no request, and it was necessary to have requests for planning and coordination of any sort to be conducted.”

On Wednesday afternoon, as the mob stormed the Capitol, communication with Capitol Police seems to have broken down. While the Capitol Police apparently made some kind of request for 200 soldiers, the Pentagon struggled to confirm it.

“There was tremendous confusion coming out of the Capitol,” McCarthy said during the Pentagon briefing.

Working with Mayor Bowser, “we were trying to figure out the situation up on the Capitol Hill… with phone calls from members of Congress and others,” McCarthy said. “Clearly the Capitol Hill police were.. being overrun, and it was very hard to get the adequate read of the disposition of their officers, how we could tie in with them and then start this operation.”

Instead, McCarthy said, he met with DC police chief Robert Contee and FBI deputy director David Bowdich “to put together a hasty plan to… reestablish a security perimeter around the immediate front doors of the Capitol, and then send… tactical teams to go inside out to clear the chambers as well as leadership offices… and get the Congress back in there by 8pm so we could certify the election.”

To do that, the National Guard pulled its soldiers off the traffic checkpoints and subway stations, rallied them at the DC Armory, put them in riot gear, and then deploy them to the Capitol. That was a significant logistical undertaking, undertaken in the midst of chaos, and McCarthy said it was remarkable that it was completed in just two hours.

“Around 4:30,” he said, Guard troops began taking over the outer perimeter, freeing up law enforcement enforces to enter and clear the Capitol itself. “At that moment, we had about 258 soldiers in the city,” he said.

“By 7:15, both chambers and leadership offices were cleared,” he said. “Members were able to return to business by 8pm.”

In the meantime, Acting Defense Secretary Christopher Miller had approved the mobilization of more Guard troops: first 1,100 from DC Guard, then the full 6,200 from Maryland, Virginia, New York, New Jersey, Delaware and Pennsylvania.

This morning, fencing materials arrived from Maryland, while Guard troops reestablished their presence at the traffic control checkpoints and subway stations abandoned at the height of the crisis. UPDATE ENDS

Several of the Pentagon’s biggest missile defense and long-range strike programs will fall under Kathleen...

“I’m optimistic, based on my discussions with [MDA director] Jon Hill, that we’ll potentially see...