INCISIV National
Acasă Armata “It is too early to say where we will end up across... 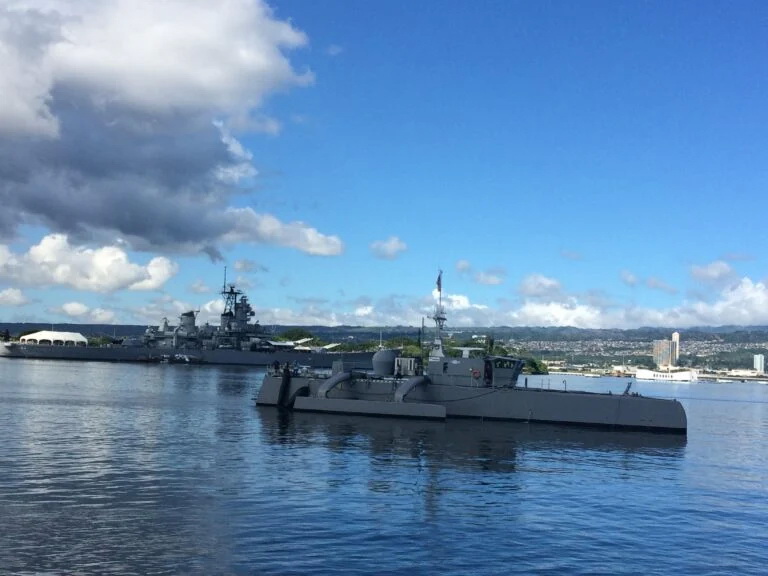 The experimental unmanned Sea Hunter is the forerunner of the Navy’s proposed fleet of robotic warships.

WASHINGTON: The Navy is working on designs for its future Large and Medium Unmanned Surface Vessels that would allow them to support small crews for limited and specific missions, the service’s top unmanned systems officer said today.

Capt. Pete Small told the virtual Surface Navy convention that the Large USV will remain “essentially unmanned,” but will be equipped with room to berth a small crew to help getting underway and returning to a pier, refueling and doing repair work at sea. The Medium USV will not have the capacity to carry any sailors, however

Both designs are in the works, with the Medium ship a bit further along as the Large vessel goes through an analysis of alternatives for offensive surface fires that kicks off later this year.

“It is too early to say where we will end up across that portfolio, but we are investigating a range of options via our prototyping efforts,” Small said.

The Navy took a step toward building a fleet of robotic ships in September, awarding several contracts worth a cumulative $41 million to begin developing requirements and potential designs for the Large USV.

Huntington Ingalls; Lockheed Martin; Bollinger Shipyards; Fincantieri Marinette Marine; Gibbs & Cox Inc.; and Austal USA were each awarded $7 million contracts for the LUSV study. Each contract includes an option for engineering support that, if exercised, would bring the cumulative value to $59 million.

The Large USV is following on the heels of the Medium USV program, which saw a $34.9 million contract award in July to L3 Technologies Inc. for a prototype for what could serve as the basis for as many as 40 ships. The contract included an option for up to eight additional ships, making the contract potentially worth $281 million through June 2027.

Currently, the Navy’s Surface Development Squadron One is working with the Sea Hunter version of the Medium USV, with a second ship, the Sea Hawk, scheduled to be delivered later this year.

The Trump administration waited four years to come up with a plan to increase the...

“[I]t’s really a good time, and important, for the government to step in and help...