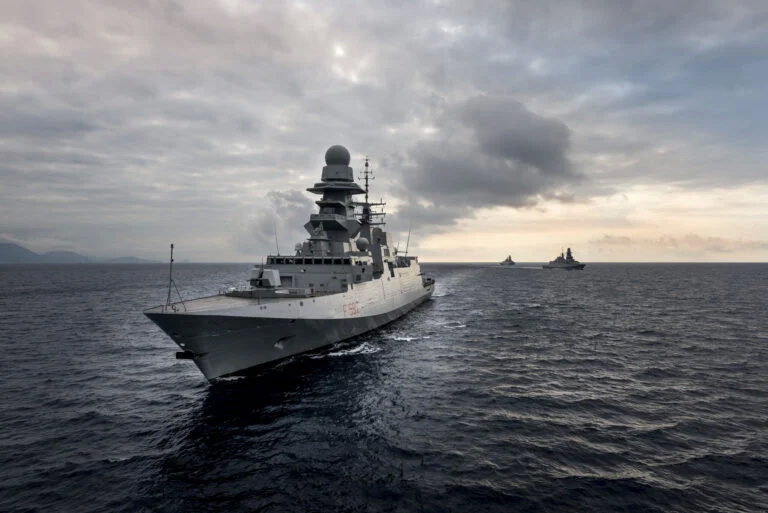 The Navy chose a version of the Italian Bergamini-class ship for the parent design of its new frigate.

WASHINGTON: The Navy’s Constellation-class guided-missile frigate will sport launchers for 16 Naval Strike Missiles alongside 32 tubes to launch Tomahawks, giving the ship the ability to pound multiple targets at range.

The ship, which will begin coming on line in 2026 under a production plan calling for two hulls a year until its planned build-out of 20 ships, is being considered a cornerstone for getting the fleet smaller, deadlier and less expensive in coming decades.

The Navy’s top admiral, CNO Mike Gilday is also looking to the frigate as a potential model for how he revamps nNvy design and aqcquisition work for future classes of ships.

“I can’t afford for FFG(X) to be anything but coming off a world-class production line that produces a ship that we can count on,” Gilday told reporters Friday in a talk before this year’s Surface Navy Symposium. The ship is expected to also inform how they are going to design and build the next-generation destroyer, or “DDG Next,” he said.

“I see no scenario where the frigate isn’t a major player where we’re heading,” Navy acquisition chief James Geurts said last year, underscoring how much weight the service is placing on the program.

Speaking at the symposium today, Capt. Kevin Smith, the Navy’s program manager for the frigate effort said the ship is being built with an eye toward expanding its capabilities in the future. “We have ample margin for this hull form. We also have in our requirement space, weight, power and cooling margin to accommodate upgrades down the road over the service life of the ship,” he said.

“Some of those could lead to direct energy type projects and other capability. But right now, just as an example for weight, we have at least 100 tons of margin for future upgrades.”

The Navy awarded the frigate work to Fincantieri in April of 2020, and the first 10 ships will be built at Marinette Marine shipyard in Wisconsin, followed by another shipyard competition for the next 10 ships.

While the frigate will be smaller than the navy’s current Arleigh Burke-class destroyers, they won’t be small by any means.

The Constellation class will be somewhat lean on sailors carrying 24 officers and 176 enlisted Sailors.

The first ship of the class — as it’s planned now, the Navy has a problematic history with pricing ships — will cost $1.28 billion, and the Navy is required by Congress to keep the next nine ships between $800 million to $950 million in fiscal 2018 dollars.