Acasă Administratie Lloyd Austin after being nominated by President-elect Joe Biden in Delaware on... 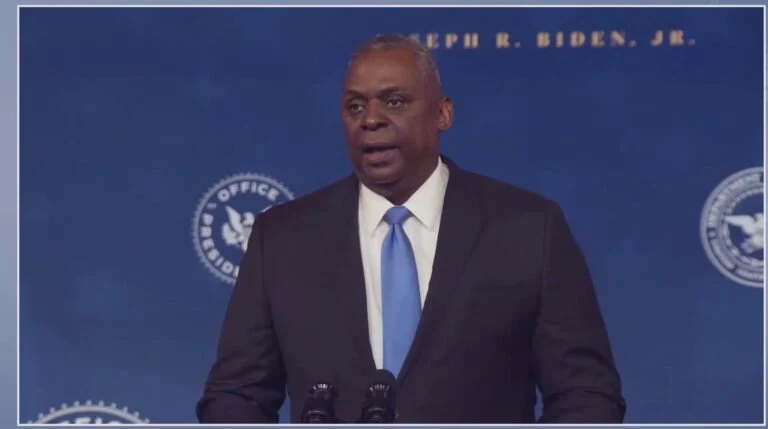 Lloyd Austin after being nominated by President-elect Joe Biden in Delaware on Dec. 9

WASHINGTON: The House and Senate today grated President Biden’s nominee for Defense Secretary the legal waiver he required to serve, as he hasn’t met the mandated 7-year “cooling off” period after retiring from the Army, paving the way for him to become the first African American SecDef in history.

The Senate is expected to vote on his actual nomination on Friday, and given the bipartisan vote total today on the waiver issue, 69-27, he is expected to be confirmed easily.

The House granted the waver overwhelmingly, 326 to 78.

The private meeting seemingly flies in the face of pledges by lawmakers to keep their interactions with Austin transparent and open, but HASC chairman Adam Smith said today that the private hearing was necessary because “procedural issues have prevented a [open] hearing,” since the HASC has yet to finalize its member roster. Specifically, Republicans have yet to appoint new members to the committee.

“Secretary-designate Austin understands that some members had reservations about his nomination given the need for a waiver,” Smith added, “and his willingness to have an open dialogue with Congress is a testament to the kind of leader he is and will be once his historic confirmation is complete.”

Rep. Joe Courtney, chairman of the HASC’s Seapower Subcommittee, said that the discussion during the bipartisan meeting focused in part on the “unlawful diversion of Department of Defense funding to the Department of Homeland Security in 2020, which resulted in $1.5 billion being taken from the National Guard and military construction.” Austin, according to Courtney, “made a strong commitment to me and the full Committee to end that practice, which goes to the heart of the principle of civilian control of our military that the seven-year waiting period is intended to uphold.”

The Republican SASC chairman, Jim Inhofe, gave his full-throated support to Austin in a statement today, saying “I am very confident that Lloyd Austin will be a strong, capable civilian leader for the Pentagon at this critical time,” adding, “I look forward to voting with the full Senate to confirm Austin as soon as we can.”

Ranking Democrat Jack Reed praised the bipartisan action on the waiver and confirmation votes, signaling Inhofe out for “his bipartisan commitment to moving this process forward in a thoughtful, deliberative manner. I hope the Senate will soon confirm former General Austin on a strong, bipartisan vote so he may begin the urgent task of leading the Pentagon.”

The committee will not change leadership from Inhofe to Reed until Senate majority and minority leaders reach a power-sharing agreement five the 50-50 split in the chamber, with Vice President Kamala Harris acting as the tie-breaking vote. It remains unclear when an agreement will be forged.

Austin had a drama-free hearing Monday before the SASC in which only only one senator openly rejected the waiver. Sen. Tom Cotton stressed his expected “no” vote had nothing to do with Austin’s qualifications or character, but he was concerned about the norm-busting waiver. In 2017, Cotton voted to grant Jim Mattis the waiver, a vote he now claims to regret.

Democrats Elizabeth Warren, Richard Blumenthal and Tammy Duckworth also have expressed misgivings with changing the law to allow the second recently-retired four-star general to serve as the top Pentagon civilian in the past four years.

The former general tried to assuage those concerns, telling the panel, “the safety and security of our democracy demands competent civilian control of our armed forces, the subordination of military power to the civil.” In particular, he said he would ensure the top role of the Office of Secretary of Defense:  “I think it’s imperative that the OSD staff maintain primacy in terms of crafting strategy and policy.”

„CISA has validated various proofs of concept and is concerned that exploitation of this vulnerability...

„If we get into a conflict with China, this is not going to be like...