INCISIV National
Acasă Armata On the eve of a major meeting with NATO defense ministers, US... 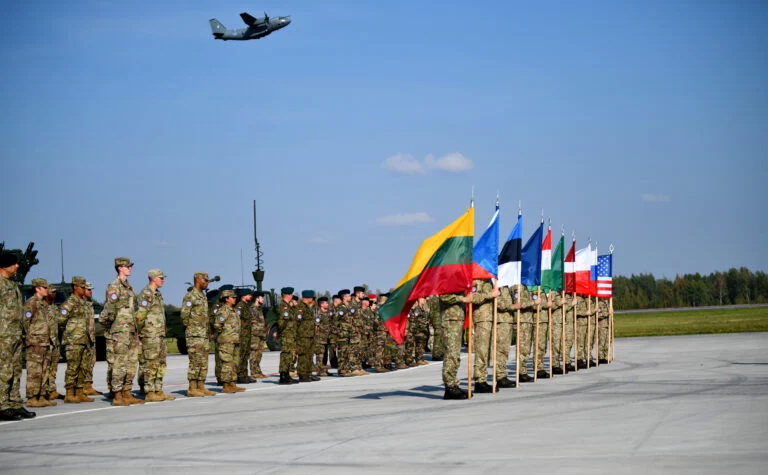 NATO soldiers during the closing ceremony of Tobruq Legacy 2020 at Siauliai Air Base, Lithuania.

WASHINGTON: Heading into this week’s highly-anticipated NATO defense minister meetings after four years of rancor and bluster, US defense officials are looking to project an aura of calm and competence, rejecting the threats and demands of the last administration in favor of a message of calm consultation among allies.

The virtual meetup will lack the personal diplomacy of previous gatherings in Brussels, where officials and their staffs huddle on the sidelines to make introductions or kickstart partnerships. But the Pentagon views the meetings as a way to reset the alliance after years of disruption, and a chance to set new goals on confronting China, combating climate change, and bringing NATO-aligned countries like Finland and Sweden closer to the alliance.

Some things will stay the same, however.

The goal of each NATO member spending 2% of their GDP on defense, and 20% of that on modernization efforts, will remain a core policy goal for the alliance, as it has since the 2014 Summit in Wales.

“Two percent wasn’t something the Trump administration came up with,” a senior defense official made a point of mentioning to reporters at the Pentagon today while previewing the meetings. “It was something that was informal. Then, in 2014, all NATO states agreed to commit to work towards 2% and 20%, so that is something that’s been consistent.”

Secretary General Jens Stoltenberg suggested as much in his own Monday curtain-raiser press conference, where he praised member states for continuing to work to meet those thresholds, even if some — like Germany — are moving more slowly than others.

Trying to keep the momentum the Trump team forced upon the alliance to share financial burdens more widely, Stoltenberg also called for sweeping changes in how the alliance pays for troop deployments and protects its technology base against foreign investment, setting the stage for what could be some of NATOs most significant reforms in decades.

The US defense officials underscored how early on this meeting comes in the Biden administration, and that they’re still working to install their own policies for allied relations. One thing the Austin Pentagon is already working on is a new look at the military’s global posture, following the review that then-Defense Secretary Mark Esper ran in 2019 and 2020. The Austin re-look will certainly be closely watched by European leaders anxious for a continued US presence on the continent.

A second defense official suggested that the Pentagon’s surprise announcement of a planned withdrawal of 12,000 US troops from Germany in July 2020 isn’t something the new administration is interested in pursuing, however.

“To be very clear, the posture in Europe is critical to US national security interests and I would in no way expect it to be anything that would look like, say a withdrawal,” the official said. Earlier this month, the head of European Command, Gen. Tod Wolters, confirmed that the Biden team had already halted planning for that withdrawal.

The officials repeatedly said the American goal in the talks will be to “revitalize” the transatlantic relationship, after the “last four years [when] the public perception of the US commitment and our intent may have been a little bit unclear,” as the second official put it.

“And so I think what you’ll hear from Secretary Austin is a change in tone and a change in approach, while also building on and recognizing the tremendous progress that NATO has made since 2014.”

Ben Hodges, a retired 3-star Army general who served as head of US Army Europe until 2017, told me the number one US priority going into these meetings should be to “eliminate all doubt about the American commitment to NATO,” and to “be clear about expectations with regard to burden-sharing…but be open to a more sophisticated approach to what 2% means.”

Now with the Center for European Policy Analysis, Hodges would also like to see increased efforts in the Black Sea region, calling it the ‘“launching pad’ for all of the Kremlin’s malign activity in Ukraine, Georgia, and Syria.  Its illegal bases on Crimea are essential for these operations.”

Last month, just days after President Biden confronted Russian President Vladimir Putin over Russian activities in the region, the US sent three ships – including two destroyers – into the Black Sea, marking the first time in three years the US deployed two destroyers in the waterway.

After a long internal debate, Israel’s military has decided to buy both another Lockheed Martin...