INCISIV National
Acasă Administratie Abu Dhabi kicked off its defense shows, promising they would be no... 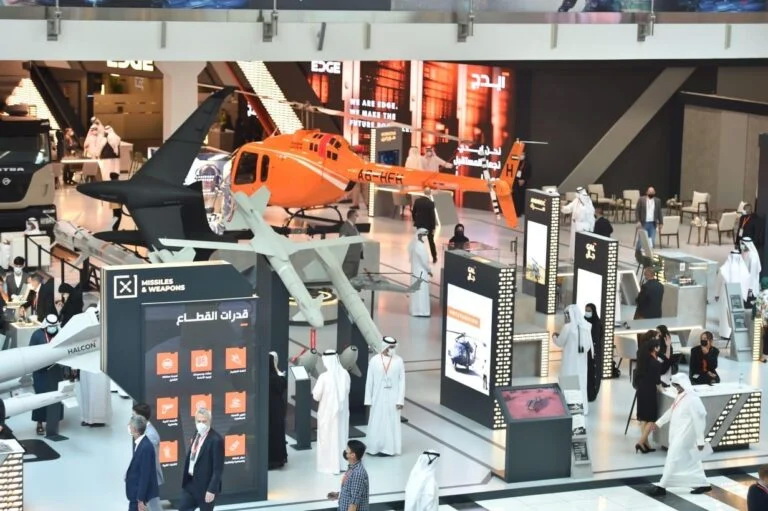 ABU DHABI: Amid strict safety measures, Abu Dhabi kicked off its defense shows, promising they would be no less striking than previous editions unburdened by quarantine, COVID-testing, global travel restrictions and all the other challenges of the COVID era.

The bi-annual five-day events, International Defense Exhibition and Naval Defense Exhibition (IDEX and NAVDEX 2021), feature more than 900 exhibitors from 59 nations with 35 national pavilions. Among the new countries participating are North Macedonia, Azerbaijan, Luxembourg and Portugal; Israel backed out a week ago due to COVID-19 travel restrictions.

“84% of companies exhibiting will be internationally based, while 16% will be UAE based entities which demonstrates the vast international interest in IDEX and NAVDEX,” said Humaid Matar Al Dhaheri, managing director and group CEO of the Abu Dhabi National Exhibitions Company (ADNEC), the shows’ organizers.

As part of the naval exhibition, 17 maritime units from 10 countries are stationed at the pier of ADNEC Marina and dedicated areas in Mina Zayed, Abu Dhabi’s port area. Units include the American guided-missile destroyer USS John Paul Jones, and the UAE’s Shouty coast guard boat, among others.

On opening day, the UAE armed forces signed 19 defense contracts with local and international firms, with the larger part going to domestic companies.

“Worth $1.37 billion, 22% of the deals were signed with seven international firms while 78% went to 12 local companies,” Staff Brig. Gen. Mohammed Al Hassani, official spokesman for IDEX and NAVDEX, said in a press briefing.

Among the deals: 12 B-250 light attack aircraft by UAE-based Calidus to the armed forces; armored vehicles by UAE-based Nimr to the land forces; seeker 400 unmanned aerial systems by South-African Denel SoC lTD to the command of presidential Guard; and the production of the GATRT-T air communication system by French Thales to the UAE Air Force and Air Defense Command.

The show hopes to support the growth of UAE’s defense industry and forge new relationships with major international companies.

“These conferences will contribute to our continued development and complement the UAE’s wider story of success over the next 50 years, helping build a competitive national economy based on knowledge and innovation,” Maj. Gen. Staff Pilot Faris Khalaf Al Mazrouei, chairman of the Higher Organizing Committee for IDEX and NAVDEX, said.

“We are forging more meaningful partnerships with international defense contractors, and welcome the opportunities that IDEX and NAVDEX create for us to engage in trade as we mark our first-year anniversary,” he told me.

The company is launching more than 10 new products and exhibiting some 50 core capabilities from missiles to cyber defense to electronic warfare and intelligence and mission support.

Saudi firms are also taking part under the slogan “Invest in Saudi Arabia”, underlining their commitment to spending of 50 percent of the kingdom’s military and security spending within its borders.

Boeing on the other hand is looking to underscore its commitment to the region, expecting projects growth for aerospace defense industry.

“We are happy to safely regain in-person customer engagement and continue discussions with our partners in the Middle East,” Jeff Shockey, vice president of Boeing’s global sales and marketing for defense, space & security and government services said at a pre-IDEX press briefing I attended.

“The discussions will focus on a wide range of key services in the region including the T-7A Red Hawk pilot training system, KC-46A tanker, AH-64 Apache, CH-47 Chinook, and laser weapon systems, among others,” he added.

For Torbjorn “Turbo” Sjogren, vice president of international government and defense at Boeing, “the Middle East countries are very much top of mind as a growth market”, he said at the briefing.

Although Boeing does not expect to make major announcements at IDEX, the company will mainly highlight its continuous “world-class sustainment and support services to the installed base of platforms in the region as well as our local partnerships with Mideast companies,” Shockey told Breaking D.

Boeing expects the government support and services market for 2020 to 2029 to be worth $1.4 trillion. Of that, the Middle East represents $195 billion of the services market, with more than 50 per cent of that dedicated to defense and security services.

For its part, Raytheon Technologies will be exhibiting in its new identity for the first time since last year’s merger.

“We are looking forward to demonstrate how we’re in a position to immediately address the priorities of our commercial and defense customers in the UAE and the region faster and more efficiently than ever before with our added scale,” Alan Davis, chief executive of Abu Dhabi-based Raytheon Emirates, told me.

The French defense industry is focusing on innovation.

“At IDEX 2021, we aim to highlight Naval Group’s capacity to provide customer-centric innovation and differentiating technological responses to the most critical naval capability needs, such as information superiority, combat superiority and ability to last at sea,” Eric Papin, the company’s executive vice president and chief technical and innovation officer, told me.

Thales is expecting new partnerships. “IDEX and NAVDEX have always been good for business, and this year we have some interesting partnerships under way,” told me Patrice Caine, Chairman and CEO of Thales.

“We have all seen that connectivity, big data, artificial intelligence, cybersecurity, and quantum technology are vital to the development of our societies. The speed at which these are evolving means that countries must continuously implement the latest solutions to protect their nations.” he added.

However, safety and precautionary measures remain the top priority.

“We have implemented a wide range of precautionary and preventative measures that ensure the health and safety of visitors and participants alike. These have been developed in close co-operation with relevant health and regulatory authorities,” Al Dhaheri added.

PCR tests were mandatory at arrival to Abu Dhabi’s airport and visitors must retest 48 hours ahead of the show. At the event, participants are geared up with their masks and sanitizers while social distancing is strictly enforced. Thermal scanners are also placed at all entrances and isolation rooms should anyone require treatment.

CHAIR OF THE WORLD ZIONIST ORGANIZATION IN ROMANIA