INCISIV National
Acasă Armata New drones – launched by helicopters in flight and built by the... 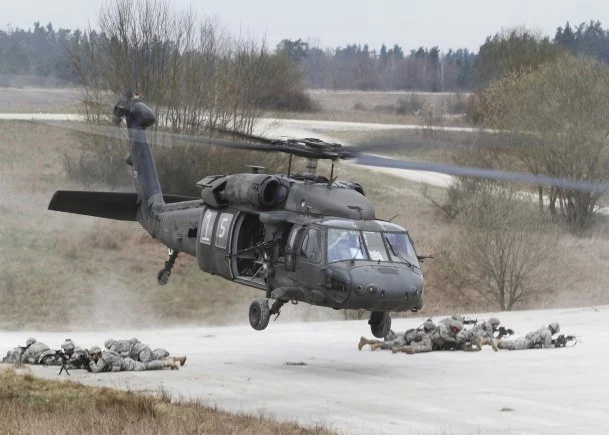 A UH-60 Black Hawk takes off after unloading soldiers during an exercise in Germany. An air assault like this one — with troops wearing IVAS targeting goggles — will be a key part of EDGE21, along with new long-range drones and jamming pods.

WASHINGTON: The Army will host an interservice aviation exercise in May to prove its Chief of Staff’s recent claim that the service can bring “speed and range” to future battlefields. Known as EDGE21 — Experimentation Demonstration Gateway Event 2021 – and held at Dugway Proving Ground, the experimental wargame will be the Army’s latest bid to prove it plays a vital role in far-ranging and fast-paced All Domain Operations.

EDGE21 both builds on the airpower aspects of last fall’s Project Convergence 2020 exercise and helps prepare for the upcoming Convergence 2021. In an exclusive interview, the head of aviation modernization at Army Futures Command, Brig. Gen. Walter Rugen, gave me some striking examples of how much farther he plans to push this time, in terms of both physical range and tactical complexity.

During last year’s Project Convergence, UH-60 Black Hawk helicopters launched a swarm of ALTIUS mini-drones — known in Army jargon as Air-Launched Effects (ALE) – to “flood the zone” out to more than 60 kilometers (37 miles). In EDGE21, Rugen said, the Black Hawks will carry a bigger drone — roughly six feet long — developed by the Pentagon’s Strategic Capabilities Office (SCO) and known as ALE-Large. Its exact capabilities are classified, he said, the new air-launched drone will reach out “hundreds of kilometers.”

Another crucial new technology making its appearance at EDGE21 will be the Army’s new drone-borne jamming pod, known as MFEW (Multi-Function Electronic Warfare) Air-Large. The pod wasn’t ready in time for Project Convergence last fall, Rugen said. It will dramatically increase the Army’s ability to detect and disrupt enemy transmissions, and blind anti-aircraft defenses so friendly aircraft can slip through, lessons learned from Russia’s illegal invasion of Ukraine.

Marine Corps F-35B Joint Strike Fighters will also fly in EDGE21, Rugen told me. The stealth jets played an intriguing role in Project Convergence last fall, passing targeting data to and from Army forces – but the Marine pilots were a late addition to the Army-run exercise, and their participation was limited. This time, the Marines were part of the plan for EDGE21 from the beginning, Rugen said, and “there’s far more breadth and depth to the task we’re asking them to do, [with] much greater collaboration on joint kill chains.”

Ground forces will participate as well. Besides Special Operations teams (which he wouldn’t discuss in any detail), Rugen said, the commander of the 82nd Airborne Division – the Army’s rapid-response force, which has been experimenting extensively with artificial intelligence – will bring his tactical command post (TAC) and coordinate key parts of the operation. (This streamlined HQ element isn’t the same as bringing the full-up division Tactical Operations Center, or TOC, which is a notoriously big target).

Once the 82nd commander decides the F-35s and drones have sufficiently beaten down the simulated “enemy” anti-aircraft defenses, he will order something that was not attempted in Project Convergence: an air assault. Black Hawk helicopters will fly in infantry soldiers equipped with the Army’s brand-new augmented-reality targeting goggles, the Integrated Visual Augmentation System. “We’re jumping into our first IVAS-enabled air assault,” Rugen told me.

It’s a big technical challenge to coordinate all these different forces – manned and unmanned; air and ground, plus satellite support from space; Army, Special Operations, and Marines – over long distances. So the command, control, and communications network for EDGE21 will be beefed up significantly over what was available last fall, Rugen told me. The improvements include upgrades to the TSM waveform and the addition of two entirely new waveforms. The reinforced network will be much more resilient to disruption, he said, and “it adds much greater range” – which makes the whole scaled-up operation possible.

Overall, Rugen told me, the objective is to “out-tempo our enemies

multiple simultaneous engagements.. .both kinetic and non-kinetic.” In other words, you want to bombard the enemy with many different types of attacks at once, from physical bombs and troop landings to electronic jamming, and keep up that furious pace until the adversary is overwhelmed. Imagine the enemy is a baseball batter, stepping up to home plate, only to discover the US has five different pitchers throwing fastballs, curveballs, and spitballs at him at once.

Now, EDGE21 is hardly the final word on Army aviation, but rather a sizable step in a long march to the future force. Some of the systems employed will be early versions of actual future weapons, such as the ALE-Large helicopter-launched drone, the MFEW-Air-Large electronic warfare pod, and the IVAS targeting goggles.

Others will be surrogates. The network, for instance, connects just a fraction of the different elements envisioned for a future all-service Joint All-Domain Command & Control (JADC2) system. As for the physical aircraft, the UH-60 Black Hawks will be standing in for the Future Long-Range Assault Aircraft (FLRAA), while heavily modified Special Operations Grey Eagle drones will stand in for the Future Attack Reconnaissance Aircraft (FARA). FLRAA and FARA are part of a larger push for revolutionary Future Vertical Lift (FVL) designs to replace existing helicopters with much faster, longer-ranged machines.

“We’re not waiting for the truck to be delivered,” Rugen said of FARA and FLRAA. Instead, the service is testing out new tactics, technologies, and interconnecting architectures with what it has on hand, today. That way it can work out the bugs and figure out what it’s missing as early as possible, while it’s still relatively easy and affordable to fix it.

Russia’s not going to turn off the jamming.