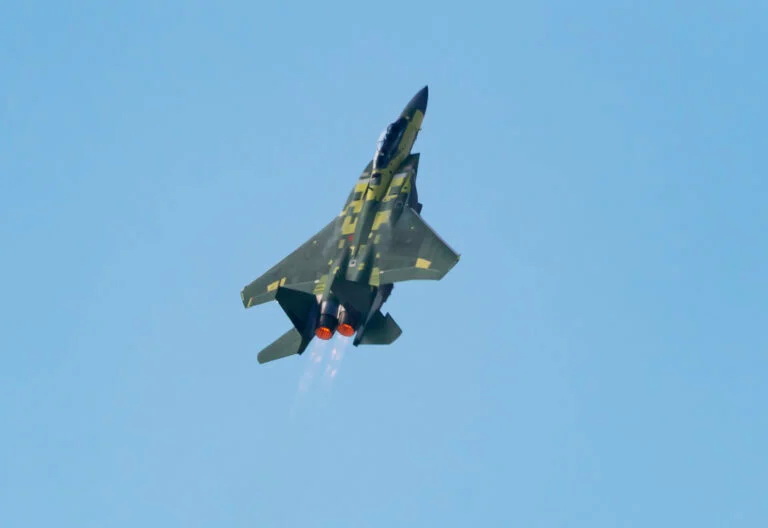 “EPAWSS will significantly improve the survivability and utility of the F-15, and will be a great compliment to what is already a very capable and lethal aircraft,” F-15 EPAWSS program manager Lt. Col. Dan Carroll said in a BAE press release today.

Under current Air Force plans, a total of 217 F-15E model aircraft “could be modernized ” with the EPAWSS system, a BAE spokesperson said in an email — that could include up to 144 F-15EX models. (EPAWSS has a somewhat roiled history tied to shifting service plans for upgrading the F-15E.)

EPAWSS “will come pre-installed on all F-15EX jets currently in production St. Louis,” the spokesperson said. However, Initial operational capability won’t happen until “summer 2025,” the spokesperson revealed. This means the final version of the self-protections suite won’t be available until some 60 aircraft have been produced.

The plan is for the company to continue to deliver incremental upgrades to the EPAWSS software, including improved geolocation and threat identification capabilities, the release adds. The Air Force in April started testing EPAWSS at Edwards AFB in California — including to ensure compatibility with other radio-frequency using subsystems such as the Raytheon AN/APG-82 radar.

The F-15EX took its maiden flight on Feb. 2 at Lambert International Airport in St. Louis, the Air Force said Feb. 11. Kingsley field is the home of the 173 Fighter Wing, which will become the training wing for the aircraft in 2024 — when it is to hit initial operational capability.

Boeing was awarded a 10-year indefinite-delivery/indefinite-quantity (ID/IQ) contract in July for the F-15EX with a ceiling of almost $22.9 billion. While the Air Force has yet to determine the ultimate size of the buy, the minimum number of aircraft under the contract is 144 and the maximum is 200 — with a flyaway unit cost estimate of $87.7 million, a service spokesperson said at the time.

UPDATE BEGINS. Boeing, however, “has consistently said we will deliver the jet below $80 million based on our firm fixed price offer,” a company spokesperson said in an email. “That price includes the aircraft, the electronics that go inside the aircraft (APG-82, ADCPII, MIDS/JTRS, EPWASS) and 2 GE-129 engines. We are confident the aircraft unit price will be below $80M per aircraft in Lot 1.” UPDATE ENDS.

The contract includes eight pre-production aircraft for testing. Two of those are expected to be delivered to Eglin AFB in Florida by the end of the first quarter this year, the Air Force’s February announcement stated. According to the service’s 2021 budget request, the Air Force plans to buy 12 aircraft next year, 14 in 2023, and 19 in both 2024 and 2025.

The F-15EX is designed to replace the Air Force’s aging F-15C/Ds. Key upgrades include the long service life of the new airframe — some 20,000 flight hours, “double the service the life of an F-15C,” said said Col. Jeff Edwards, 173rd Fighter Wing commander, in the February release.

The other big change is the F-15EX’s open mission system, which will ease future software updates to subsystems such as the avionics suite. Indeed, Boeing has been positioning the aircraft as a pathfinder for the Air Force’s digital design and engineering approach — originally dubbed the “Digital Century Series” acquisition model by former Air Force acquisition czar Will Roper but what the service now is calling the “e-series” model.

Boeing further has been in discussions with the service about the F-15EX playing a role in future on-ramp exercises for the Advanced Battle Management System (ABMS) as the program continues to develop technologies applicable to DoD’s emerging Joint All Domain Command and Control System (JADC2) strategy.

Esper’s Navy plan remains stuck at the White House, but with the Trump term running...

All-Domain Operations is”the biggest key to the future of the entire budget,” the Vice-Chairman of...

Industry and Congress were deeply skeptical of the Army’s suggestion to enter a government design...