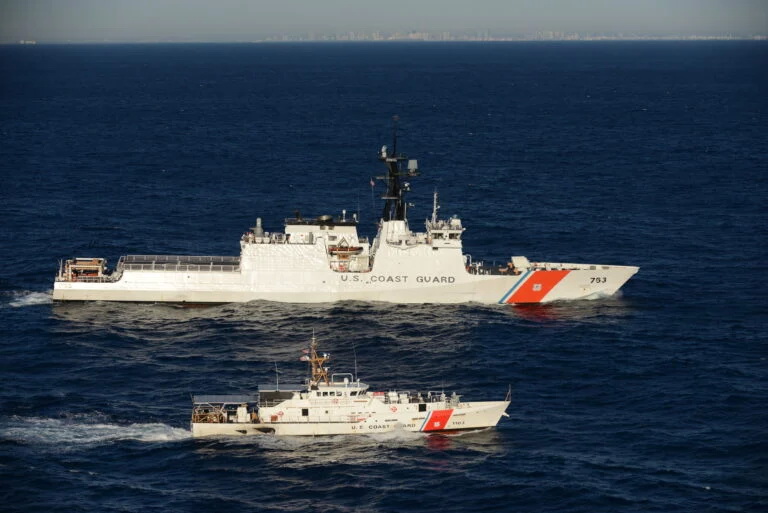 WASHINGTON: The Coast Guard is charting a path to be more engaged everywhere from the Middle East to the Arctic, dispatching attachés to embassies in Europe and the Indo-Pacific and sending more ships on long deployments to take some of the workload off the Navy.

Later this month, the National Security Cutter Hamilton will join two new Fast Response Cutters in the Mediterranean on their way to eventually replace the first of six small patrol boats operating with the 5th Fleet in the Middle East. The ships will first stick around Europe, Coast Guard Commandant Adm. Karl Schultz said today, possibly pushing into the Black Sea to counter the expanding, and often aggressive, Russian presence there.

In the Pacific, where the Coast Guard has stationed two fast response cutters in Guam over the last several months, with a third slated to arrive this summer, Schultz sees a wide range of missions.

The guard ships are “not ballistic missile shooters,” he said, “but you know not every place that you need a ship needs to have that BMD capability.” What his ships can do is “free up shooters to be the key places they need to be, and we can do sanctions work, we can do [illegal] fisheries, we can do other types of patrols,” like the Taiwan Strait transits guard ships have done in recent years.

Those missions fit within the vision laid out in the Tri-Service Maritime Strategy paper the Navy, Coast Guard and Marine Corps released in December to address some of these issues. These include dispersing ships and ground forces to as many locations as possible to make it harder for Beijing to focus on just one location, port or base.

In the High North, the guard’s largest icebreaker, USCGS Healy, is still scheduled to sail the Northwest Passage through the Arctic later this year, despite having been crippled by an engine failure late last year. Its planned voyage will follow the push of two 270-foot Medium Endurance Cutters “further North in the Atlantic than any other ships of that class had previously ventured,” Schultz said.

The new deployment of hulls to Europe and the Pacific will be bolstered by a diplomatic push on the ground, as Schultz is sending Coast Guard attachés to work out of American embassies.

Later this year, a Coast Guard officer will be assigned to the embassy in Copenhagen to work with Denmark and Norway on issues involving the Arctic, a posting that signals Washington’s increasing interest in operating the High North “as our strategic competitors maneuver for advantage in the region,” Schultz said during his annual State of the Coast Guard address, which preceded his press conference.

The posting comes after the November placement of the first-ever Coast Guard attaché in Australia, who is also working with the governments of New Zealand and Papua New Guinea. In 2022, another Coast Guard attaché will arrive in Singapore for the first time, to help manage growing concerns in the region as the Chinese coast guard and maritime militia become more aggressive over fishing rights and territorial claims.

“I see these strategically placed Coast Guardsmen making a big impact with our global maritime partners” Schultz said. “This is part of our effort to increase our footprint in the Indo-Pacific, doubling-down on operations and engagements with like-minded island nations and Quadrilateral Security Dialogue partners.”