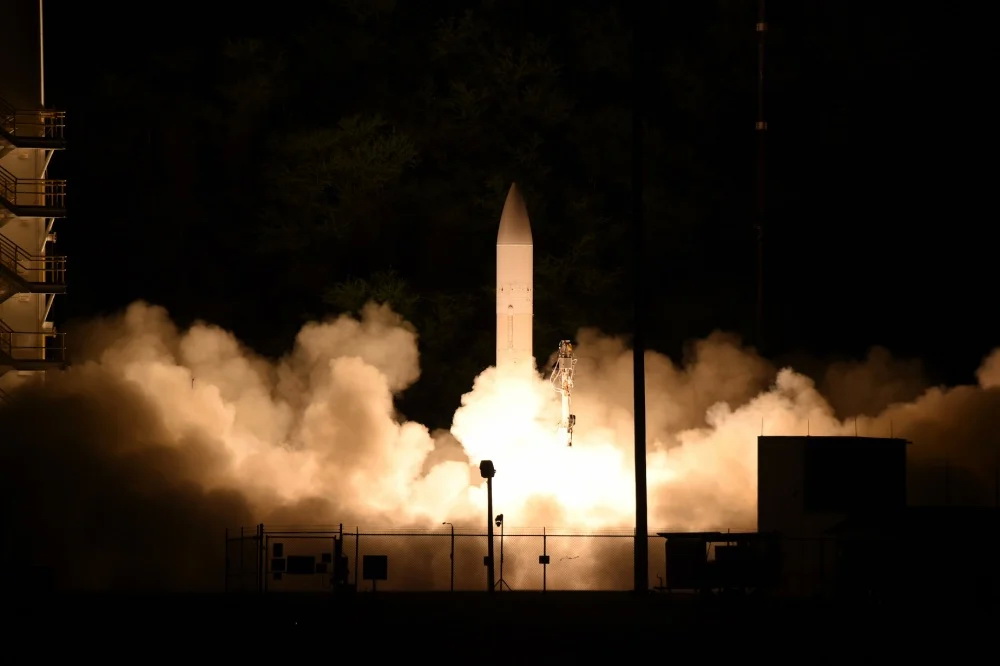 An Army M109A6 Paladin armored howitzer under camouflage during wargames in Germany.

WASHINGTON: The future Army will fight as a tough, intractable “inside force” — a term usually associated with Marines — forward-deployed in adversaries’ backyards, says a new strategy paper from the service’s Chief of Staff. This approach, Gen. James McConville writes, has already shown promise in joint wargames.

In pop culture terms, the Army’s casting itself as Bruce Willis’s iconic action hero/survivor John McClane, in a new production you might call Die Hard In the Pacific.

Released today, “Army Multi-Domain Transformation” calls for long-range, land-based missiles on West Pacific islands to threaten targets deep within China’s “Anti-Access/Area Denial” defenses. (The approach could work in Eastern Europe as well, but the document only mentions the Pacific by name). Rather than deploy from the US in response to an attack – a deployment that enemy missiles, submarines, sabotage, and cyber warfare can disrupt – these forces will be pre-deployed in peacetime or rapidly deployed in crisis, setting up inside the areas the enemy hope to deny access to. Once on the ground, these nimble, logistically lightweight units will avoid destruction by using cover, concealment, camouflage, decoys and frequent relocation.

“The Army will provide [joint] combatant commanders with land forces that are persistent, cost effective, and survivable,” the paper says. “Technologically connected and geographically dispersed Army forces deployed across the land – whether archipelagic [i.e. islands] or continental – present a key operational problem for adversary sensing and targeting. Put simply, land forces are hard to kill.”

Trench warfare in World War I.

Are they really? The answer, historically, is yes. Even in the 1990s, when American precision airstrikes seemed unstoppable, they struggled to find and kill targets ranging from Iraq SCUD launchers to Serbian tanks. Indeed, ground troops have survived by, well, going to ground – digging in and hiding out – in the face of tremendous bombardments all the way back to the trench warfare of the Western Front. Other famous cases of survival under fire include the Germans at Monte Cassino, the Japanese at Iwo Jima, and countless examples with the Viet Cong.

Now, that’s not the most encouraging model of survival under fire. (John McClane doesn’t particularly enjoy any of the Die Hard movies, either). After all, American troops are used to being the ones with overwhelming firepower. But they’ll increasingly have endure being on the receiving end of precision-guided onslaughts, as China, Russia, Iran and North Korea modernize their long-range sensors, command networks, and missiles – anti-aircraft, anti-ship, and anti-troop – into layered A2/AD defenses.

The goal of Anti-Access/Area Denial, as the name implies, is to make it too deadly for American forces to operate inside a given area. The goal of an American “inside force” is to establish itself inside that that area before the shooting starts and dig in. That foothold disrupts the enemy’s area-denial scheme, creating an opening in the foe’s defenses into which US reinforcements can flow.

In recent years, it’s been the Marine Corps who’ve called themselves the “inside force,” emphasizing the agility and toughness of their Marine Expeditionary Units deployed by ship and aircraft around the world. Now the Army is making its bid to use the term – and while it lacks the Marines’ expeditionary agility, its sheer size gives it the edge in staying power. This paper is a shot across the Marines’ bow in the already roiling budget wars.

Will this work? Well, the wargames are promising, the paper says. “Large portions of the MDO [the Army’s Multi-Domain Operations concept] have already been validated in Joint wargames,” it says. “Many of these wargames have revealed the utility of ‘inside forces’ postured before conflict begins.”

The Army is particularly eager to show its approach – and its budget – will really matter in a Pacific war with China, historically considered a Navy-first affair.

“In INDOPACOM [Indo-Pacific Command],” the paper says, “relatively light multi-domain forces, capable of engaging targets in all domains at operational and even strategic ranges will be prepositioned in parts of the first island chain [which runs from Indonesia through the Philippines to Japan – ed.] and act as the linchpin of effective joint and combined defenses. Joint and combined capabilities in the first island chain will mix anti-ship, anti-aircraft, and surface-to-surface missiles to threaten early damage to adversary forces.”

Equally important, the paper says, they’ll be able to absorb the damage the enemy dishes out in return.

Highlights From The Paper

Below are selected excerpts from Army Multi-Domain Transformation: Ready to Win in Competition and Conflict, organized by theme.

Now and in the future, first battles are decisive to the outcome of campaigns. Winning the first battle or preventing a fait accompli in crisis will be necessary to prevent prolonged conflict and escalation. Ground forces will decisively shape the first battle by leveraging positional and capability advantage to rapidly deliver options for crisis response, and to win in conflict.

The Army is also creating a Global Near-Peer Scenario as a backbone to [Army analysis]….The Army scenario will be global in focus. Peer adversaries are global actors that have global pressure points. They do not adhere to neatly drawn Combatant Command boundaries. The scenario also acknowledges the requirement for different theories of victory in different geographic settings….

Adversary nations have political structures that enable them to conduct long-term strategic planning in the context of decades, not years. To remain relevant and effective, the Army must expand our temporal context and pursue a consistent intellectual picture spanning from 2028 to 2035 and beyond.

The Army says its “Strategic Landpower Network” of connections in foreign countries can smooth the path for the rest of the services.

The Army will continue to provide the foundation for DoD security cooperation through the Army’s comprehensive landpower network of Allies and partners….The Army is uniquely qualified to maintain and expand this vital network…..

Partner militaries, including their senior leaders, are predominately land force-centric. In the Indo-Pacific, 24 of 29 armed forces chiefs are army officers, and of the 30 NATO member states, 22 have armed forces chiefs from their respective armies….

In 2019, the Army trained over 7,100 foreign students in various courses throughout the enterprise. Of those, 1,200 were foreign officers in professional military education courses. The Army will prioritize course allocations to grow our pool of participating partners 50% over the next five years…

Since Operation Desert Storm, China and Russia have studied the American conduct of war, and have designed concepts and capabilities to counter our strengths and exploit our weaknesses, particularly in force projection. The Joint Force can no longer assume that the homeland is a sanctuary, or consider the ‘global commons’ uncontested. Joint Force deployment will be contested from fort to port to foxhole, eroding our ability to project power….

Fighting state actors from a cold start by projecting power from the homeland over many months is no longer a viable course of action. There is no alternative to the dynamic presence of formations in contested theaters. Army forces are uniquely structured to establish this presence, with a suite of capabilities that provide depth of range and speed, and benefit from extensive landpower networks with partner armed forces.

A notional organization for a future Multi-Domain Task Force, with weapons ranging from hypersonic missiles to electronic warfare.

[Calibrated Force Posture] hinges upon enduring presence, not permanent presence – a combination of assigned forces, rotational forces, and access for key capabilities. [Army forces] They will be highly mobile, with alternate and supplemental positions to ensure survivability and unpredictability. This will require dynamic posture initiatives–turn-key or warm start sites to provide opportunities for maneuver without incurring the cost and host nation imposition of traditional basing or permanence. This posture will be optimized to host low-signature forward capabilities on a more ambiguous, distributed, and difficult to target infrastructure.

Operating as the Joint Force Commander’s “inside force,” the Army provides an asymmetric counter to the challenges posed by near-peer adversary militaries, through unique, land-based, foundational capabilities. The asymmetric advantages are based on the ability of landpower to maneuver and communicate rapidly, strike at range, and survive in complex terrain – leading to greater decision dominance and overmatch. At the operational level, Army “inside forces” will conduct persistent cross-domain maneuver to conduct flanking attacks and turning maneuvers. Army forces in distributed forward positions, will attack by strikes and raids across intra-theater lines of operation to create operational mobility corridors.

The key attribute of capable inside forces is resiliency. Resiliency goes beyond hardened bases and encompasses a host of attributes that are mutually supporting. Resiliency for land forces combines mobility, cover, concealment, and deception. With mobility, land forces will be light and agile enough to quickly conduct operations, then reposition….

[T]his must also be augmented with the ability of the unit to conceal itself from detection through physical, electronic and cyber means. Deception will present false targets to the adversary through a combination of electronic spoofing and physical decoys….

The Army will persist in the face of adversary aggression – to include the use of chemical, biological, radiological, or nuclear (CBRN) weapons. Our adversaries will not hesitate to employ CBRN weapons if their vital interests or the integrity of their regimes lie in jeopardy.

The capability to strike in depth with lethal and non-lethal cross-domain effects is critical to creating overmatch in operations against a peer adversary. Army multi-domain forces will be organized and equipped to extend land-based effects into other domains, providing a suite of tools to integrate in the joint fires process, from the onset. This includes short, mid, and long range precision fires to engage and destroy adversary land, air, and sea capabilities in depth….

In addition to providing an “inside force”, the Army will provide “outside forces” at the strategic and theater level that will have the capability and capacity to secure global key terrain, strategic choke points, lines of communication, threaten an adversary strategic flank, or hold their interests at risk.