INCISIV National
Acasă Armata “I want to be able to identify what is, I want... 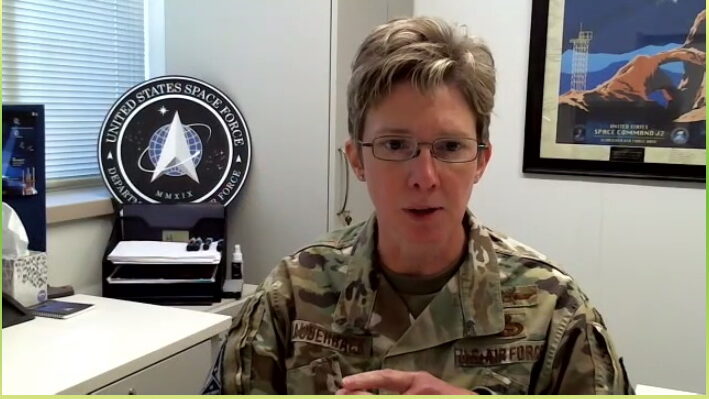 One of the first tasks for the fledgling Space Warfighting Analysis Center will be to flesh out a plan for improved intelligence, surveillance and reconnaissance sensors to keep tabs on space-based threats, says Maj. Gen. Leah Lauderback, hear of Space Force’s ISR Directorate.

The new center, known as the SWAC, will “be able to get after the force design of what do we want an ISR enterprise to look like from a capability perspective, whether that’s on orbit or not,” she said.

However, neither is the SWAC quite there yet, she admitted. “We are just developing, creating that analysis center,” she said.

Despite the high priority Space Force and Space Command are putting on space domain awareness as a foundational element of US space power, it is likely, Lauderback explained, to take a couple of years to craft “game plan to get to building those capabilities.”

“I can’t say that we have made a lot of strides in this,” she went on, “but if you could ask me that again, you know, six months or a year from now, then we will be at a much better place to understand everything that is out there,” as well as gaps in US ground- and space-based sensor coverage and requirements for new systems.

Chief of Space Operations Gen. Jay Raymond ordered development of the SWAC in his CSO Planning Guidance published in November. Its mission actually goes far beyond developing an ISR capability plan. According to the guidance document, the center will be a central cog in developing the overarching “force design” of the entire Space Force:

“The SWAC will analyze opportunities to enhance the resilience of legacy systems as an interim step to fielding a force designed to operate in a warfighting domain. The SWAC will develop future force structures that meet evolving mission requirements, are resilient to the threat, and are cost informed. The SWAC will execute Service wargaming functions that help to formulate these architectures, as well as understand their interplay between USSF and the Joint Force. SWAC designs inform the CPG, annual “Force Design” updates, Service requirements, and programming options validated by the [Strategy and Resource Office.]

Lauderback said that it is clear that an improved space domain awareness architecture will include not just Space Force assets, but also space-based and ground-based systems operated by the US Intelligence Community and the expanding commercial space surveillance sector.

“Absolutely it needs to include anything that is flown today, by NRO as an example, but also what is commercially flown — also what is terrestrially owned,” she said. “I mean, industry is coming up with some great ideas to be able to get after the persistence that we need, as well as the fidelity of sensors.”

To that end, she envisions “a design group that gets together and and determines what do we have, what do we think that we need” and how collective to pursue those needs. “We can’t do this all on our own.”

Lauderback — who took up her position in August — is not simply sitting back and waiting. She has been working to set up her directorate’s organizational structure in such a way as to enable it to tackle the challenges to space domain awareness.

For example, the ISR Directorate’s S2 staff position (the 2 being the DoD designation for intelligence staff, i.e. such as J2 for the Joint Staff and A2 for the Air Force) is S2 for intelligence, surveillance and reconnaissance not just intelligence, one Space Force official noted. This is a nuanced change that reflects Space Force’s intentions to be more proactive in seeking out space threats — since the word ‘reconnaissance’ traditionally has signified active operations (in the past usually aimed at terrestrial targets), such as U-2 spy plane missions, whereas ‘surveillance’ has referred to passive options, such as ground-based radar.

Indeed, Raymond coined the term ‘space domain awareness’ deliberately by back when he was still head of Air Force Space Command to replace the traditional term ‘space situational awareness’ to signify not just a more active, but a more robust US effort to detect, track and ultimately counter threats via deterrence, denial or destruction. The memo defines space domain awareness as:

“The effective identification, characterization, and understanding of any factor, passive or active, associated with the space domain that could effect space operations.”

It further states that “SDA must be predictive and current and can only be achieved through the dynamic integration of Intelligence, Surveillance and Reconnaissance (ISR), metric observations, and environmental monitoring to execute space battle management and support blue plans and operations.”

Lauderback is busy setting up Space Force’s own National Space Intelligence Center (NSIC), following Raymond’s announcement in December that the Space Force had become the newest, and 18th, member of the Intelligence Community.

“I am marching towards the goal of January of 2020 to actually being able to stand up the end initial operating capacity” for the center, she said.

The ISR Directorate is also working to integrate two new squadrons moving over from the Air Force’s National Space and Intelligence Center (NASIC) to help staff up that center.

Lauderback said that despite some concerns about duplication of effort, “there’s truly not a lot of overlap or duplication that’s happening.” She noted that the various DoD and service intelligence centers get together via “committees” that “ensure that we’re not stepping on each other’s toes.”

Looking at the uptick in adversary counterspace activities over the past 10 years, she added, “there’s gonna be plenty of work.”

Israeli sources said the Saudis had no clue something might happen