Acasă Armata “We will be lucky to see any serious budget detail prior to... 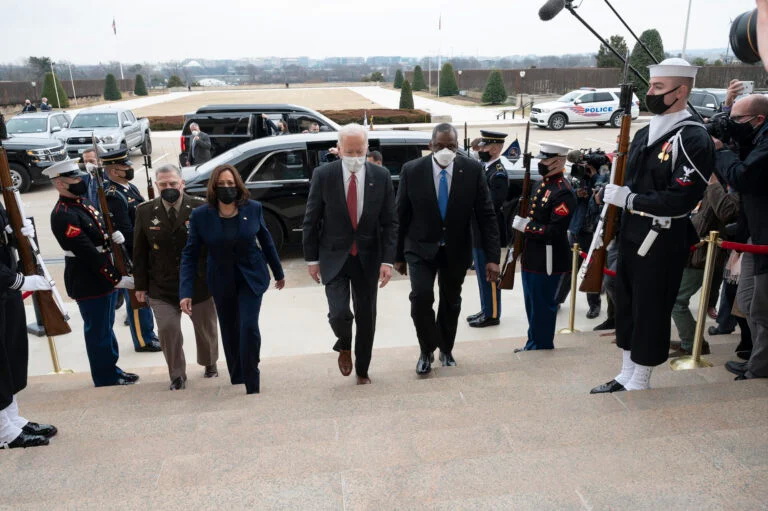 President Joe Biden and Vice President Kamala Harris at the Pentagon, with Secretary of Defense Lloyd Austin and Chairman of the Joint Chiefs Gen. Mark Milley

WASHINGTON: It’s budget season in Washington, but with no formal, detailed proposal for 2022 expected from the White House for weeks, the services and congressional committees are left to argue amongst themselves about hypothetical numbers.

Multiple defense officials have promulgated the line that a 2022 budget request would be released in early May, but that goal appears to be slipping, with several sources saying it may be June before the request makes it to Congress.

Even a slip of that length would be “typical” for in a transition year from one administration to another, noted Arnold Punaro, a former staff director for the Senate Armed Services Committee and retired Marine Corps general.

The one thing that seems clear is that the Biden administration has no appetite for increasing the defense budget, meaning it will almost certainly come in around the $704 to $708 billion, basically flat from the previous year.

There was an expectation last week that the overall budget number would be released without details for the services or specific programs, but as Friday came and went without word, it became clear that there is still plenty of internal discussion at the White House and at the highest levels of the Pentagon over what the budget should look like.

“I have no idea what that top line is going to be right now,” Chief of Naval Operations Adm. Michael Gilday told reporters during a Q&A today. “I haven’t seen anything in writing that’s been definitive.”

Gilday’s service appears poised to lose the least — or gain the most — in the upcoming budget battle, as the Biden administration appears most focused on challenging China in the Pacific.

The budget will eventually set a topline that’s in line with the Biden team’s priorities, including COVID relief, infrastructure, and climate, but it’s unclear how many of these issues can be dealt with in the administration’s first budget.

Defense Secretary Lloyd Austin has kicked off over a dozen reviews of everything from a global posture review to nuclear modernization, plus starting work on a new National Defense Strategy document due next year, and “these will not be done in time to be reflected in any substantial way in FY 22,” Punaro added.

The expected flat overall defense budget isn’t a Biden policy made up from whole cloth; the Trump budget projection for 2022 was also flat, although it covered inflation, something the Biden budget might not do.

While a late budget is typical for a new administration, the process was slowed further by the lack of access the new team had to internal planning documents during the transition, and the fact that most DoD offices were filled by “acting” officials at the end of the Trump presidency, many new to the job. The Biden team has also been focused on combatting the COVID virus, passing the COVID relief bill and creating the huge infrastructure and related bills soon to come before Congress.

“We will be lucky to see any serious budget detail prior to Memorial Day” Punaro said, meaning the fiscal year could kick off on Oct. 1 under a Continuing Resolution, “and there is not likely to be any spending deal outside of the debt ceiling so the uncertainty about the topline — which is always bad news for DoD and its industries — will flow into the fall.”

The missile firings, DoD says, „further destabilize the situation in the South China Sea. Such...

The Navy isn’t part of an Army/Air Force project to build a new tactical network,...

The services are collaborating as never before, officials said, as they outsource non-combat networks through...